For a restaurant that specialises in all things fishy, it seems odd to feature a picture of a dessert at the top of this post. Such is the magic of Saint Peter.

It’s a small, unadorned shopfront. A narrow space is bordered by two different stone walls, with the semi-open kitchen at the back.

And even at the start of lunch service, it’s already packed. We were shown to a table along one wall, given the small food menu and a rather larger list of drinks and Australian wines and promptly settled in.

The menu changes according to what the restaurant can source and that often means it’s different every day. Patrons next to us had seen an Instagram post of a deep-fried fish sandwich a day earlier and thought it would be a perfect ‘morning after the night before’ treat. Hah. It wasn’t available.

Virtually everything on the menu – including our dessert – has fish in it, even some of the sides, but we’re getting ahead of ourselves.

Ordering a local Lord Nelson’s Three Sheets pale ale and a glass of a natural sparkling, a NV ‘Daosa Natural Reserve’ from Piccadilly Valley in South Australia (not far from the Adelaide Hills), we perused the food on offer.

This experience is either huge fun or possibly a bit confronting. Not much goes to waste here, with the Saint Peter team making use of fish liver, stomach and head. Having had fish liver several times in Japan we weren’t all that fazed.

So what else is there to do but dive in? After gluttonous husband was talked into half a dozen oysters, we ordered three dishes to share, plus chips (naturally) and asked the wait staff whether that would be enough. They recommended we choose one more. Sorted.

And here are the oysters. There is a short list of Sydney rock oysters to choose from. Gluttonous husband took three Pambula, described as having a mineral/buttery flavour and three Wapengo which were salty and creamy. He preferred the Pambula Rock variety. 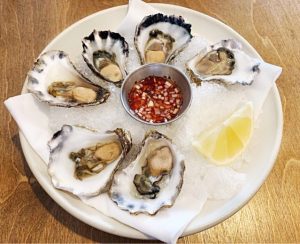 While the oysters are served freshly shucked and with a vinegar and shallot sauce, that’s pretty much where the simplicity ends here. The rest of the courses are designed to play with your mind and they’re testament to two things – the cleverness and ingenuity of the chef, and the deliciousness of the result.

First up was the scotch egg. 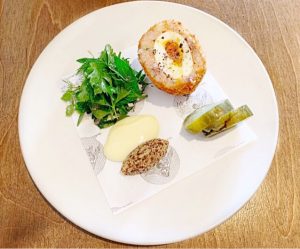 This delectable morsel is a perfectly-cooked egg surrounded by ‘sausage’ made from Esperance snapper. There’s also a quenelle of VB mustard (a type of black mustard seed), mayo, pickled cucumber and a small leaf salad.

The scotch egg and mustard combo is utterly delicious. Generally Greedy Girl isn’t the biggest fan of snapper, but this just works brilliantly together.

Next up was another piece of alchemy – a bacon and egg muffin. 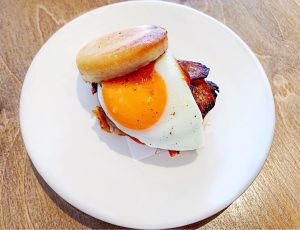 The ‘bacon’ is made from Mooloolaba Broadbill – a type of swordfish. There’s a little sweet tomato relish on the house-baked muffins and the overall dish is, again, absolutely spectacular.

We then had some terrine, made from Bowen line-caught Coral Trout head and served with the same salad, pickles and mustard as the scotch egg, plus bread and butter. 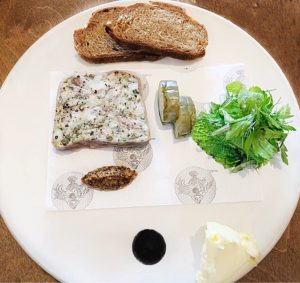 While gluttonous husband just ate the terrine on its own, Greedy Girl was very happy to slather it over the bread with the butter and the mustard. This is an amazingly light dish, almost refreshing, and quite delicious.

It was time for one of the bigger dishes. We ordered Corner Inlet southern calamari with barbecued fennel, olive and kelp. It’s presented beautifully with a thin, crunchy potato crisp on top. 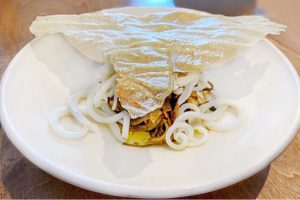 Corner Inlet is in Victoria, near Wilson’s Promontory and a famed fishing spot. While the calamari was exceptionally tender and the potato crisp a nice addition, the other flavours on the plate were a bit muddled. We certainly couldn’t taste the fennel, which was a bit disappointing.

This came with our side of crispy chips. And yes, they were as good as they look. 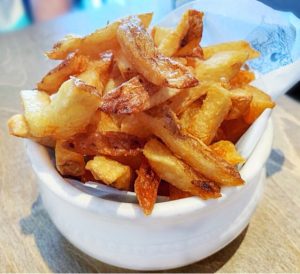 Finally, we moved on to dessert. We weren’t going to have any, but the description was too wonderfully strange to resist – a Murray Cod fat caramel chocolate slice.

Now, Murray Cod fat isn’t the greatest thing in the world. If you’re lucky enough to get this amazing freshwater fish to cook at home or on holiday, you’d get rid of all the fat in the cleaning process if you’re just going to eat the flesh.

But the very clever folk here have used it to develop a thin coating of caramel on top of the chocolate, adding cacao nibs to the top, plus a Macadamia-nut tahini (the sauce you can see in the picture), pickled currants and a John Dory roe biscuit crumb. A little whipped creme fraiche is piped on the side.

OMG. This is extraordinary. The use of the fishy stuff just gives this dish a little extra edge. This is worth the price of admission alone.

As we mopped up the remnants and asked for the bill we happily chatted with the people next to us who ordered many of the same dishes –  they who were desperately seeking hangover food. We both left very happy.

Fish lovers will rejoice in this restaurant while, for casual fish eaters such as Greedy Girl, there are plenty of delights to be found.