It’s just extraordinary how many restaurants in Paris serve traditional French food – and manage to survive. Still, you need to give people what they want and clearly there’s a huge appetite for the classics.

In the streets immediately around our hotel in the 9th arrondissement, there would have to be more than 30 bistros. How they differentiate themselves is anyone’s guess. We settled on Au Petit Riche, reviewed as a top neighbourhood spot.

Unlike many of the traditional bistros which have their front windows open throughout the ‘summer’ (quote marks intended – it’s been a rather cool visit), Au Petit Riche has no seating on the pavement.

It’s just as well – Parisians have obeyed (for the most part) the no-smoking indoors rules but they don’t apply to eating areas outside, or even in a covered area in front of the restaurant. All it takes is an open door or window and you may as well be sitting next to someone gasping on a Gauloises … if they make those any more …

We were shown to a room so perfect, it could have been a movie set. Chandeliers, gilt, mirrors, red velvet banquettes. 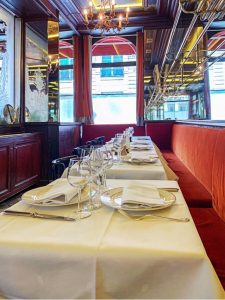 Greedy Girl’s resolve to not have wine at lunch folded faster than Superman fait sa lessive (look that up in Google translate). Glasses of Cabernet Franc were quickly brought to the table along with a carafe of water. 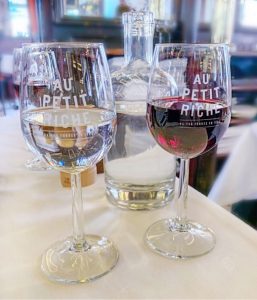 And so to food. Greedy Girl started with an onion soup. 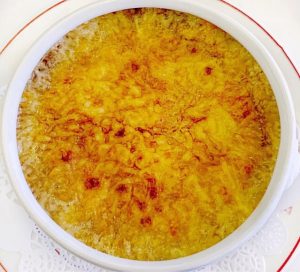 Served in a traditional small tureen, it was nicely gratineed. Expecting the soup beneath to be fearsomely hot, it was somewhat surprising to find it a decent eating temperature.

Sadly the broth wasn’t outrageously flavourful and the bread lurking within quickly became very soggy. The cheese was quite nice, but still lacked a bit of oomph. 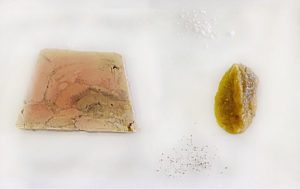 A quite enjoyable slab of terrine, Greedy Girl felt the chutney was way too strong. It was an unusual fruit flavour – one we couldn’t put our finger on.

And so to main courses. Greedy Girl wanted something light so chose the salmon gravlax. 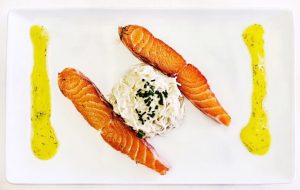 Gluttonous husband took the dish at the top of this post, the beef tartare. For those of our friends who despise seeing the egg on top of tartare, this was perfect and the level of spice in the mix also just right. A happy chappy.

Declining the offer of dessert or coffee, we were on our way. Each of the wait staff spoke reasonable English and, unlike some other establishments where we walked in and pretty much walked straight out, seemed happy for our patronage. Greedy Girl thought rude French waiters were just a cliche but this trip to Paris shows they’re very much still around. C’est la vie …

The 9th arrondissement is a fantastic spot from which to explore Paris and has plenty of local options when you want to stay ‘closer to home’.