Onslow Auckland – a special night out

In this COVID-19 world, having the chance to travel internationally is not to be taken for granted. When the Australia-NZ ‘bubble’ opened, Greedy Girl was online like a shot to book a trip to Auckland to celebrate another, ahem, turn around the sun.

Her choice for this special night out was Onslow Auckland – a newish restaurant from one of New Zealand’s more well-known chefs, Josh Emmet, and his wife Helen who heads up the front-of-house team.

Greedy Girl wasn’t able to celebrate her last birthday in her usual style, i.e., an international trip. The only journey was from the bedroom to the living room, Melbourne being in full-on pandemic lockdown at that point.

2020 would have been her 13th overseas birthday in a row. Feel free to start humming the theme to the Twilight Zone; let’s hope the world continues to recover from this horrible virus and borders will again be open.

So, birthday 2021 started with an early flight out of Melbourne (and a delightful glass of Pommery in the Qantas First lounge). On arrival in Auckland to another spookily quiet airport, we headed to The Chamberlain in the hip Britomart district down towards Auckland’s waterfront for some craft beers and a very good Cosmopolitan. 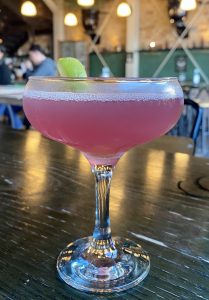 A very fine Cosmopolitan at The Chamberlain, Britomart

Slightly the worse for wear, Greedy Girl dragged her tired caboose uphill to Onslow, finding a busy and vibrant restaurant. Ordering a glass of champagne, a Bloody Mary and two snack dishes. We settled in on a comfy corner banquette.

A slight lost in translation moment ensued when the French waitress brought us a glass of Chardonnay instead of the Bloody Mary. D’Oh. The requested drink arrived shortly thereafter and gluttonous husband pronounced it worth the wait. One of the most balanced and tasty Bloody Mary cocktails he’d ever had. Top marks.

Our snacks were the Fiordland crayfish eclairs (pictured at the top of this post), with a spiced bisque and basil. The crayfish meat was certainly very moist but Greedy Girl couldn’t discern any basil. Still, quite delish.

Second snack was chicken liver parfait with smoked maple syrup, black pepper and a generous serving of toasted brioche on the side. 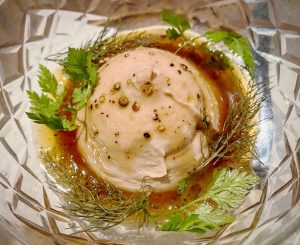 The parfait was very smooth and the combination with the maple an interesting take. Greedy Girl isn’t the biggest fan of smoky flavours but this worked quite well and the crunch on the top was a welcome addition. It was a rather messy dish to wrangle; care and attention must be paid to ensure it doesn’t end up on one’s couture.

And so, to starters. Greedy Girl couldn’t go past Yellowfin tuna tartare with sesame, chilli, lime and avocado, accompanied by seaweed crackers. 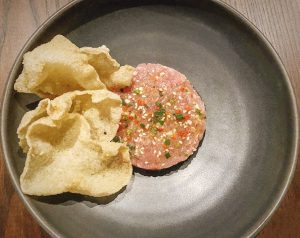 We were told the avocado was underneath the disc of tuna. Greedy Girl was a little disappointed at how little there was on the dish, but the quality of the ingredients was paramount and, quite rightly, the tuna was the star of the plate. The crackers gave a good crunch and added some saltiness.

Gluttonous husband opted for a dish one doesn’t see all that often – lambs’ tongue schnitzel. 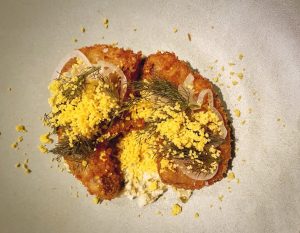 A golden plate of happiness

These breaded morsels were served with capers, free range egg, Cipollini onion and dill. Like most offal, this had a strong taste but the combination of flavours and textures had great appeal. The addition of the onion was inspired.

We moved on to main courses. Gluttonous husband was tempted to start with Cloudy Bay clams but found they were an accompaniment to the butter-poached snapper so opted for that. 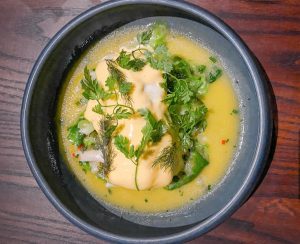 The fillet of snapper was liberally dressed with a bearnaise sauce, Cloudy Bay clams, Brussels sprout leaves and bronze fennel. It was an attractive-looking plate but gluttonous husband felt the fish got overwhelmed by the sauce. Neither of us are fond of Brussels sprouts but he commented they gave the dish a nice texture.

Greedy Girl ordered the aged Wakanui Beef scotch steak. The waitress said this was recommended medium rare. All good. It came with braised shortrib on top, combined with sourdough crumbs for crunch, creamy parsnip and a port truffle jus. 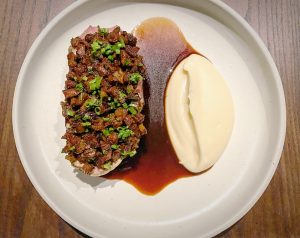 Having been provided a good steak knife, Greedy Girl tucked in. And that’s where the problem began. The steak was cooked way too much. Greedy Girl would characterise it medium to well rather than medium rare. Scotch fillet steaks can be a coarse texture at any time but combined with this level of cooking, the dish was just too hard going.

And herein lies the test of a good restaurant. The waitress picked up that Greedy Girl had a concern and immediately took the plate back to the kitchen. Then, the very nice Helen came to the table to enquire. She said some of the steak was actually medium rare but accepted it wasn’t to Greedy Girl’s liking and offered to replace the dish.

Gluttonous husband already being half way through his fish, Greedy Girl didn’t want to wait for another dish to be prepared, so plumped for the ‘salmon trolley’.

This was ‘Big Glory Bay’ salmon gravadlax, sliced from a large fillet at the table, served with honey mustard dressing and pickled cucumber. Separately, a dish of salmon mousse topped with caviar, and toasted Swiss rye bread arrived. 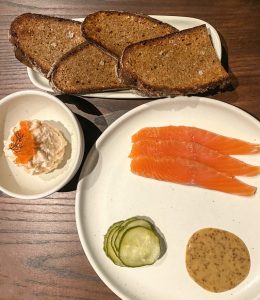 A medley of salmon

The gravadlax was divine, as was the salmon mousse with the delicious salty pops from the roe. Both the pickled cucumber and dressing were a little too sweet for Greedy Girl’s liking and having already chowed down on brioche earlier in the evening, the bread felt a bit heavy. Still, it was a light and tasty dish.

With the early morning start and trans-Tasman flight weighing heavily upon us, we decided to head back to our hotel. The staff asked us to wait – so they could bring Greedy Girl an almond financier with a candle to wish her happy birthday. That, and a card from the staff, were lovely touches.

We headed for the exit, having a nice chat with Helen who gave us tips for where else to try in Auckland and on Waiheke Island. Posts on some of those adventures will come shortly.

Onslow is the passion project for Josh and Helen Emmet and opened not long before New Zealand and the world went into lockdown. Josh, a Kiwi, and Helen, a Brit, met in New York City where Josh was working for Gordon Ramsay. They headed back to Auckland via a stint in Melbourne.

This is a very nice experience with inventive food and good service. It’s definitely one to put on your radar in Auckland.