Update: the great chef passed away in Lyon on January 20, 2018 at the age of 91. The Foodie World is privileged to have met him.

In early June 2012, the Twittersphere chirped widely (well, OK, mainly in France) that the legendary chef Paul Bocuse had passed on at the ripe old age of 86. To paraphrase Mark Twain: reports of his death were greatly exaggerated.

Bocuse, undoubtedly the elder statesman of French cuisine, holds a special record in the Michelin pantheon – he’s held three Michelin stars for nigh on 50 years. His bio says he comes from a line of cooks dating back to the 17th century. At lunchtime yesterday on a rainy and cold first of July, the great man toured his eponymous (and glamorous) establishment on the backs of the Rhone in Lyon and went table to table, greeting his guests.

This was special in many ways for Greedy Girl and gluttonous husband – not only their first taste of three-star cooking, but a romantic nod to their very first fine dining experience together. Many moons ago, Bocuse opened a restaurant in Melbourne at the Daimaru department store, helmed by someone who has continued to call Melbourne home, Philippe Mouchel.

The TGV covered the 465km from Paris to Lyon in just on two hours. The countryside whizzed by, made even blurrier by drops of rain, running horizontally on the windows given the train’s awesome speed. By the time we arrived in Lyon, it was the full-on weather disaster – thunder, lightning, rain.
Lyon is sited on the Rhone and Saone rivers, at the foot of the alps. It’s extremely pretty (as you can see from the picture, above) but it pales to what comes out of the kitchen at Paul Bocuse.

Old world charm abounds – more waiters than diners (although that doesn’t necessarily reflect in the service, more on that later), chandeliers, tapestry chairs, starched white linen everywhere, including on the person of Monsieur Bocuse with his chefs whites and foot-high toque.

It was also the first restaurant on this Euro 2012 pilgrimage of fine food, that English was NOT the universal language. While Greedy Girl had few problems with the menu in French, gluttonous husband asked for the carte en Anglais. It took the waiter about 10 minutes to find one. Obviously not much call for it.

In a full restaurant for Sunday lunch, Greedy Girl estimated there was only one other table speaking English. If most of the waiters spoke English, they didn’t let on. Only one senior waiter tried to communicate. The rest was rapid fire French and Greedy Girl struggling to keep up.

Anyway … on to the food. Paul Bocuse offers a la carte choices, or three tasting menus. The cheapest is the menu classique at 145 euros, the menu bourgeois at 185 and the menu grande tradition classique at (gulp) 230 euros. Gluttonous husband summed up the situation succinctly: When are we ever likely to be back here? Ummm … never? We decided to eat 230 euros each.

The grand tasting menu features two of Bocuse’s all-time classic dishes – the truffle soup he created for French president Valery Giscard d’Estaing in 1975 (which costs 80 euros if you order it a la carte) and the truffled Bresse chicken (210 euros for two). We sat back in breathless anticipation.
First up was the amuse bouche of a cold petits pois soup served with comte cheese and the most delicious cheese puff. Le Jules Verne (see the blog Going sky high) take that. By comparison their cheese puffs were like cardboard marbles.

We began the menu proper with scallop of foie gras, pan-cooked and served with verjus sauce. It was extraordinarly buttery, soft, rich and so good. It was served on a soft crouton (almost pancake like), a sprinkling of fruit and the sauce … OMG, the sauce …

Next was the truffle soup. A huge pastry dome needed to be pierced to allow the blazingly hot soup below to cool to tasting temperature – that took the best part of 10 minutes – easily enough time to consume every fleck of pastry that was croissant like in its butteriness and flakiness. Once the soup had cooled it was delightful. A broth made from veal stock contained huge slices of truffle, cubes of veal and vegetables. Yummo. Greedy Girl made sure her bread mopped up every last drop.

The fish course was fillet of sole with noodies ‘a la Fernand Point’. A chef from the 18th century, Bocuse pays homage to his status as ‘the father of modern French cuisine’ with an unbelievably delicious ‘bruleed’ cream sauce accompanying a sole fillet, noodles, tomatoes and mushrooms.

Point’s legacy is referenced by several top chefs of our generation such as Per Se’s Thomas Keller and Pierre Troisgros, as well as Bocuse. He apparently was the first chef to challenge notions of what ‘grande cuisine’ should be in France, saying cuisine should not be static. Bless his little toque. Greedy Girl would happily eat that dish every day for a month (and then book in for quadruple bypass surgery).

Having spooned up the last of the cheese sauce, Greedy Girl was, to put it delicately, stuffed. The next ‘course’ a Beaujolais wine maker’s sorbet was delightfully light, cleansing and cold. The addition of a slurp of Cassis counteracted the wine flavour. Yum.

So, to the great presentation of the lunch, the Bresse chicken. This, the most prized of French chickens, is traditionally cooked in a bladder and presented in its hugely blown up state to the diner before being pierced with a sharp knife. Greedy Girl was kind of hoping it would whizz around the room like a deflated balloon but, alas … The chicken itself has truffles inserted between the flesh and skin. The diner is asked ‘breast or leg’ and that is carved and plated along with a selection of poached vegetables and what looked like a plain risotto. On top is spooned a morel cream sauce.

Now, Greedy Girl and gluttonous husband rarely disagree and this dish elicited more of that synchronicity. Greedy Girl’s breast of Bresse was a tad dry, while gluttonous husband’s leg was a tad undercooked. That, I expect, is one of the challenges of cooking such a bird in such a way – hard to get both parts perfect but for 210 euros you absolutely expect as such.

The risotto was undercooked – a bit crunchy but the cream sauce was further evidence that the French know their stuff when it comes to sauces. Absolutely exceedingly wonderful. Having tried to finish the plate, and failing, the wait staff enquired as whether we wanted a further serving – we’d only consumed one breast and one leg – there was another round to go. Audible groans echoed around the Rhone valley. 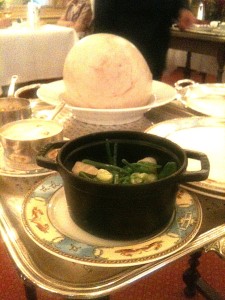 Bresse chicken cooked in a bladder

Into the home stretch. The cheese selection was presented with a flourish. Greedy Girl prefers soft cheeses so tried some camembert and pont l’eveque along with an ash-coated slightly firm chevre. Gluttonous husband (who ate most of Greedy Girl’s as well) opted for a blue, two types of goats cheese and a slice of comte. The portions given to us paled in comparison to the slabs being served up on the ‘French’ tables. We did not complain.

Finally there was the dessert selection. A communal table was piled with all manner of delicacies, from chocolate and hazelnut ‘president’s cake’ to tiramisu, berries, iles flottantes (apparently the recipe is Bocuse’s grandmother’s), pistachio cake … Greedy Girl is sure there were more choices but had started to tune out.

She chose a simple plate of fresh raspberries on a raspberry and cream coulis, poured into a spiderweb pattern at the table by the nifty waiter. Gluttonous husband chose tiramisu, which he pronounced excellent, with a side of coulis (in a flower pattern) and fresh raspberries. 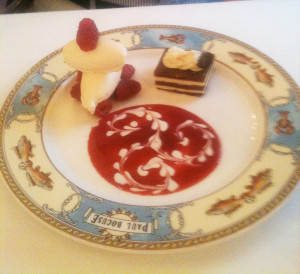 Un cafe each, and a cursory sample of some of the petits fours and we were ready to roll down the stairs and along the river, to catch the train back to Paris.

A note on the service. For the most part it was personable and friendly but there seemed to be a lot of running around and getting in each other’s way. Asking for things such as a glass of wine to complement the cheese course were not relayed on to the sommelier. We had to catch his attention to repeat the request. Several times (sacre bleu!) we had to refill our own water glasses. As mentioned, the size of portions of cheese given to us (not that we are complaining, mind you) were a fraction of that offered to other tables. Maybe they suspected the strange Australians didn’t have the stomach for it. Well, they were right.

Paul Bocuse was an out-and-out spoil. Eating there any more frequently would be seriously damaging to the stomach (although Monsieur Bocuse looked extremely well fed) and the wallet. For a once-in-a-foodie-lifetime experience, it wasn’t to be missed.