In the ‘Shoppes’ at the glitzy Marina Bay Sands, more than a few of the world’s most well-known chefs have taken up the invitation to open their Singapore outposts. In fact, a signpost inside the shopping mall points you to the ‘celebrity chef’ precinct, housing the likes of Wolfgang Puck, Mario Batali and Daniel Boulud.

Having dined at Boulud’s flagship ‘Daniel’ in New York City, Greedy Girl was keen to experience the ‘lite’ version of his accomplished French fare. There are several DB Bistro Moderne establishments around the world and a signature dish at most of them is his take on a burger, featuring red wine-braised spare ribs and foie gras. In other ‘jurisdictions’ the burger often features black truffle and, in NYC for example, has a US$120 price tag – perhaps that’s what is truly meant by a ‘Whopper’. It would certainly need to be a ‘Happy Meal’. 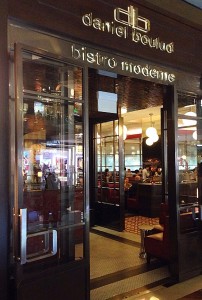 Part of the celebrity chef strip at Marina Bay Sands

But in Singapore, there’s no truffle in evidence and the sirloin burger is priced at a more modest S$42 – still a lot of money to shell out for a hamburger, but Greedy Girl was undeterred.
The look and feel of the restaurants in the celebrity chef part of the mall is carefully crafted. DB Bistro Moderne attempts a typical French brasserie, with lots of embellishment. It’s very slick and not altogether welcoming. Greedy Girl was starting to feel a little uneasy.

Shown to the table, we ordered glasses of red and started with the Assiette Lyonnaise, a collection of terrines, cured meats, bread and pickles. It was perfectly edible but there was no ‘wow factor’ from anything on the platter.

For mains, Greedy Girl plumped for the original DB burger – a sirloin patty with braised short ribs (no bone, obviously) and foie gras served on a parmesan bun while gluttonous husband chose a pork loin. While he tucked in, again there was nothing on the plate that really tantalised his tastebuds. The dish was presented nicely, with crispy artichokes and some other greens but it wasn’t particularly memorable.

Greedy Girl had a momentary sense of panic when the burger arrived. Cut into halves, secured by a skewer, its sheer height gave her a dread of lockjaw. She attempted to slice a wedge to try to get all elements at once and that was absolutely futile. Nothing more to be done than picking it up and chomping away.

And again, it was hardly a treat for the senses. The foie gras in the middle was stone cold – kind of like biting into a cold piece of butter. Greedy Girl had anticipated the pate would be at least a little warm and have some unctuousness to it.

We’d planned to stay for a dessert but were too underwhelmed. The service was also annoying, with waiters hovering, trying to take away our plates the moment we placed a fork down. One waiter also incurred gluttonous husband’s wrath by trying to take away his wine glass while there was still more than a splash remaining.

It would, perhaps, be a better setting for a large group looking for a cheap and cheerful night out – only problem there is that it’s not exactly cheap. It definitely caters better to larger tables rather than diner a deux.

The experience at Daniel in NYC was truly remarkable. So much so, we even headed for the little bar after dinner for another drink, once we needed to give up the table. Unfortunately this experience seemed to be more about the triumph of celebrity over substance.