Greedy Girl is a big fan of the British stylist Gok Wan. An avid follower of his ‘frock’ shows, they’re usually recorded and enjoyed at night when gluttonous husband has gone off to the land of nod.

The affable Gok certainly knows how to put an outfit together and, as we subsequently discovered in the Gok Cooks Chinese series, he can put together quite a tasty feast too. While gluttonous husband has zero interest in his style tips, he has embraced a number of Gok’s recipes, especially the light and crunchy chicken and corn dumplings.

While Chinese food is often the first ‘foreign’ cuisine we of European descent experience, it can be a source of trepidation for some home cooks. Finding and using the ingredients, mastering the techniques and equipment – all these excuses have been used for too long to avoid trying to make some exceptionally delicious dishes at home.

The key to these dumplings is how to get them cooked through yet soft inside with a lovely crunchy crust. Gok revealed two processes – frying and steaming. The dumplings, once assembled (and see below for the method) are first fried in a wok to get the lovely crust, then some water is thrown in, a lid whacked on and the little parcels are steamed for around six minutes.

Gluttonous husband, as is his wont, does things a little differently. Firstly, he generally doesn’t add cornflour to the chicken mix (see the method, below) and secondly he puts the dumplings in a Chinese bamboo steamer first, empties the water from the wok and then fries the base crispy. That might be a bit more fiddly, but he swears by it – and Greedy Girl can’t argue with the results.

He’s tried both methods and the latter gives a lovely crust, ready to soak up the dipping sauce. A word of caution – when you fry the dumplings (in a small amount of hot vegetable oil) they can burn very quickly. The length of time to fry depends on how hot your pan or wok is – anywhere from 2-5 minutes.

Serve them with a delicious dipping sauce. The recipe below is slightly amended from the original, by adding the rice wine. It just softens the sauce a fraction. Biting into the dumplings, you get the crispiness of the crust, the softness of the filling and a beautiful fragrance from the ginger.
The recipe can be easily varied. You can substitute minced pork, for example, and add some chopped cabbage for crunch rather than the corn. It’s all good!

DUMPLINGS
100g chicken mince (ask for thigh meat rather than breast – more moisture, more flavour)
1 tbsp sweetcorn, either shaved from a cob or canned (make sure you drain the can)
1 tbsp chopped spring onions (only use the green part)
1 tsp chopped fresh ginger (substitute quarter of a teaspoon ground ginger if you can’t get fresh)
Half tbsp soy sauce
Half tbsp Shaohsing rice wine (Chinese cooking wine, available in most supermarkets now – substitute dry sherry if you don’t have any)
Half tsp sesame oil (this is very strong, so use it judiciously)
Dumpling or gyoza wrappers (get them pre-made from an Asian supermarket or grocery – they last a long time in the fridge) 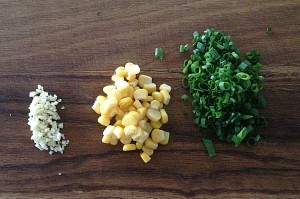 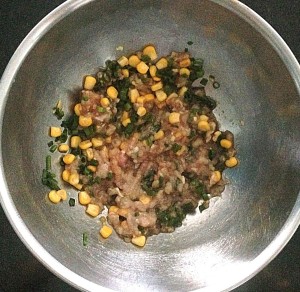 Refrigerate for about an hour – the mixture becomes quite sticky and makes it easy to work with. If you don’t have time to refrigerate, sprinkle in about half a tbsp of cornflour to help achieve the same stickiness.

Separate wrappers and lay on a cool surface. We have granite benchtops in our kitchen. Depending on your work surface, you may need to dust a little plain flour to stop the wrappers from sticking. Place a heaped teaspoonful in the middle of each wrapper. 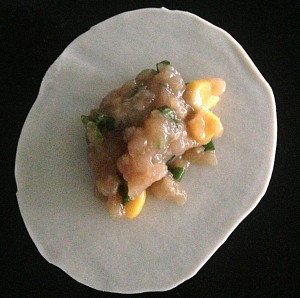 Heap a teaspoonful on each wrapper

Then, moistening your finger with a little water, wet the edges of each wrapper. 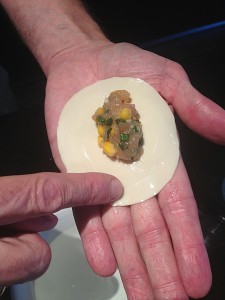 Moisten the edges with water

Then it’s time to fold the wrapper into a half-moon and crimp – fold over the projecting edge slightly to seal the parcel. 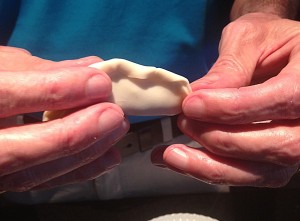 Fold over and crimp

At this point, the dumplings can go back into the fridge, covered, until you’re ready to steam/fry them. Make sure the plate you put them on can fit in the steamer. It also helps to slightly oil the plate to stop the dumplings from sticking. 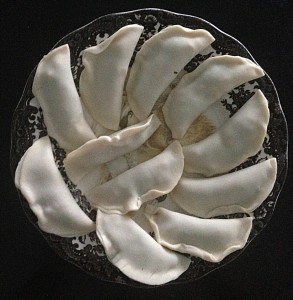 Single layer on an oiled plate 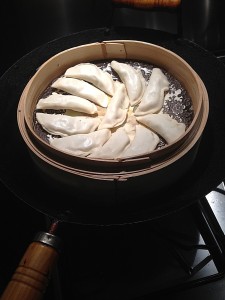 Plate goes into the steamer

Once they’ve steamed for the required period, you can fry on one side (or both if you prefer) and serve with the dipping sauce in a bowl.
Post Views: 7,542