There’s a maxim Greedy Girl lives by when travelling. Where you have good food, you usually can get a recommendation where you can find more good food. Just before waddling out of Narisawa we enquired of the team some other must-do experiences. The sommelier frowned slightly and said he usually doesn’t offer recommendations but, for sushi, we should head to Sushi Shin. He gave us the name written in English and Japanese characters and the next day we got our concierge to book.

This was an adventure into the Tokyo ‘burbs, to Shirokane. On a rainy, quiet night, we found ourselves at the curtained doorway of Sushi Shin to be greeted by the chef himself and ushered into a tiny space, with just eight high stools around the food preparation area.

And that was to be our private dining room for the evening; we were their only customers. Happily we settled in with a frosty bottle of Asahi and watched, spellbound, as chef Mithimasa Nakamura produced dish after stunning dish.

There’s no menu, but an opportunity to tell Michi-san what you don’t eat. His English is pretty good and we’re able to enjoy a basic chat about the food and his restaurant throughout the evening. He doesn’t see many westerners and the majority of those who have visited are American. Sushi Shin (Shin means ‘heart’ – he says his food comes from the heart) has been open for five years and, in July, will move to new, bigger premises nearby.

We sort out what Greedy Girl won’t eat – oysters and leave the rest up to our affable chef who dexterously wields a knife that would have had to be 60cm long and starts offering us plate after plate of delights and surprises. First, let it be said, this is not the place to visit if you don’t eat fish – or raw fish for that matter. Don’t arrive expecting the chef to throw together a quick Teriyaki beef for you.

We began with crab salad and a raw Japanese vegetable salad topped with fish roe. This was light, almost cleansing, with some nice pops of salt from the roe. 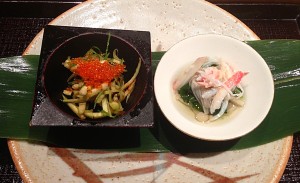 Then it was on to the first of the sashimi courses. Michi-san told us when soy was or was not appropriate. This was a bit confronting for Greedy Girl who, like a philistine, loves to slather soy over every piece of sushi/sashimi she’s ever met. First up was a wafer-thin slice of a white fish served with ‘sea foie gras’, chives and a vinegar soy. Rolling the tiny slices with a bit of the liver was tricky but we got the hang of it. It was quite delish. ‘Sea foie gras’ – the first of many firsts here for Greedy Girl. 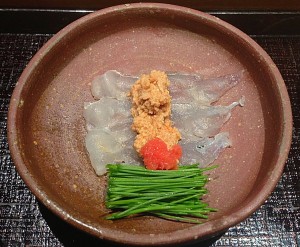 Then the chef brought out a lovely piece of tuna, offering us two slices each, topped with a divine onion sauce (which was a four-year old concoction!) and sliced onions underneath. This was served with aged soy sauce and was completely yummy. 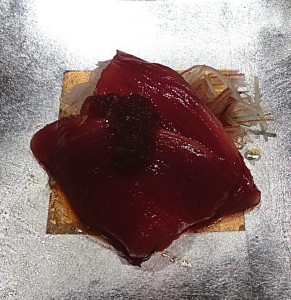 Michi-san goes to the fish market every morning to provide for the day’s requirements. Next up was red snapper and shrimp with asparagus, red onion, baby carrot and wasabi sauce. Again, very light and tasty. 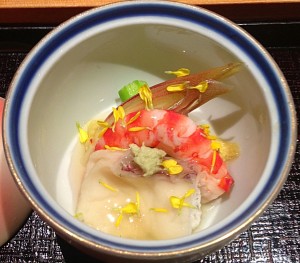 We then moved on to fresh sardines, which the chef expertly rid of bones. Greedy Girl was worried. She had already banned gluttonous husband from eating sardines at home because she hated the smell. What to do? There it was with radish fronds and a ginger soy. What the hell. She dived in and pronounced it extraordinarily edible.

Next up was marinated abalone. Greedy Girl has never been able to work out what the fuss is all about. There it was, looking very attractive (well as attractive as a sea snail can be) with gold leaf, horseradish, a sweet sauce and udon noodles. Again, it was delicious. The sashimi abalone was firm to the bite but not at all chewy. 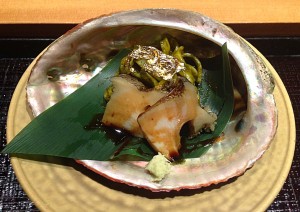 We then moved to octopus with nori (seaweed), radish and cucumber. This was very delicate. The seaweed was in two styles – crunchy like a salad leaf and as a jelly. Light and refreshing. 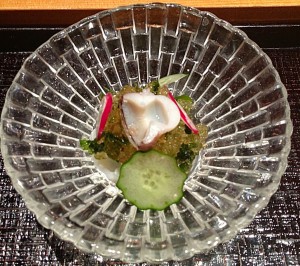 We were then asked to choose from some options for the sushi courses. Again, we deferred to the chef. Greedy Girl was feeling bulletproof by this point.

Next up was sea urchin, with grilled white fish and daikon. The sea urchin was raw and had a luscious quality. As is the custom, it was served with a special spoon, on this occasion, carved wood. 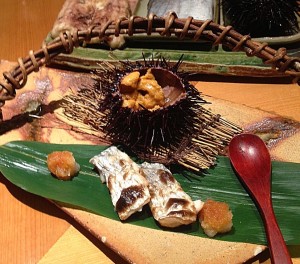 We were well into our second bottle of Asahi. Here followed a range of sushi – yellowtail, shrimp, tuna, sea eel with sweet sauce, a Japanese omelette, squid with salt flakes and sudachi citrus squeezed over the top (the chef almost fell over when Greedy Girl uttered the word ‘sudachi’, having seen it at Narisawa) and finally an amazing barbecued tuna. All incredibly good, fashioned perfectly and with just the right amount of wasabi. Soy was brushed over some of the pieces, but not all. 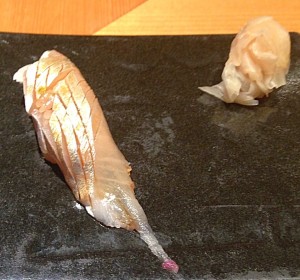 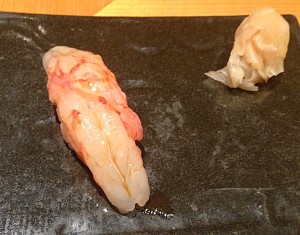 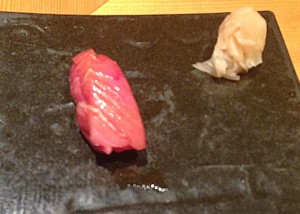 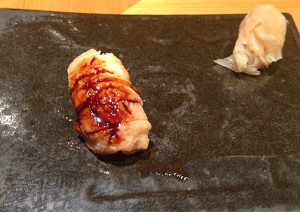 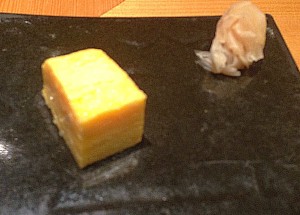 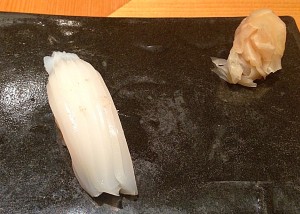 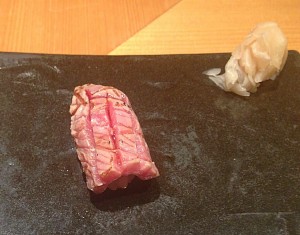 Greedy Girl usually despises eating cooked tuna but this barbecued tuna sushi was to die for. Yummo.
After that, she was very much ready to down a cup of green tea and head into the night. Gluttonous husband had one final request – a local oyster. This was done sashimi style (as you’d expect) and served with seaweed and lemon. 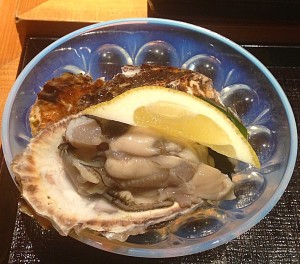 Over and out. It was a power of food and an amazing experience – at the hands of a true sushi master. This isn’t the sort of restaurant you’re going to find on Trip Advisor or many other places for that matter. Maybe when the restaurant moves to bigger quarters it may have a website but certainly don’t count on there being an English version. Ask your concierge by its name. If he has any foodie credentials he’ll know about it.