On a searingly hot Friday lunchtime and a packed Gare de Lyon in Paris, Greedy Girl and gluttonous husband were bidding farewell to dear friend Pucci Girl. As has become a little tradition on our last day in the city of lights, we headed for Le Train Bleu.

There’s usually no earthly reason anyone would want to dine in a train station – even the purchase of take away coffee (as we’d found at the Gare Montparnasse earlier in the trip) tended to be an act of desperation. Indeed, the first time Greedy Girl directed gluttonous husband up the curved staircase in the forecourt of the Gare de Lyon, he was horrified – expecting nothing more than a bog standard railway cafeteria. Did he ever get a surprise.

Le Train Bleu, as you can see from the picture, above, is totally over the top. Opened as part of the Universal Exhibition in 1900, the ceilings in the main dining room are the work of three different artists, interspersed with gold detailing on the mouldings and chandeliers. A great example of the Belle Epoque era, it’s a feast for the senses and for the stomach.

The restaurant is huge and several previously unopened areas have been pressed into service to accommodate the demand. Rocking up on a Friday (particularly as it turned out to be a holiday weekend in France) without a booking meant we got a less than stellar table but it was still in the main room. Gluttonous husband fell upon his favourite beer, a Pelforth Brune while we girls indulged in a Kir Royale. On a reasonably tight timeframe (Greedy Girl and gluttonous husband were on the 2.30pm express to Zurich), we moved straight to our choices.

Of course, given that this is Paris, there are several prix fixe set menus on offer. We decided to only order a main course each and, once sorted, a welcome amuse bouche of whipped foie gras and a tuile was placed before us. Delicious, soft, perfect. It was at the first visit to Le Train Bleu, in 2007, that turned Greedy Girl on to foie gras – the first course of the Menu Express being a slice of foie gras pan seared with pear and rocket. Gluttonous husband thought he’d get to finish the plate after Greedy Girl had tasted it. Hah. 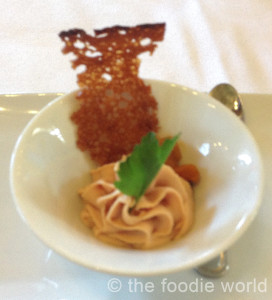 With the clock ticking, we eagerly awaited our mains. Pucci Girl is a huge fan of steak tartare. This is prepared at the table so that the level of spice can be adjusted. Pucci Girl had two requests – to leave out the egg and to have a slightly spicy mix. The mince was mixed, fashioned into a patty and Voila! Pucci Girl pronounced it very good. We recalled a story from years past when, as young journalists, we were regaled by the travel tales of two male colleagues. After working up an appetite kicking a football through the arch at the Arc de Triomphe, they set forward for lunch and ordered tartare. One told us how he gingerly lifted up the disc of raw meat, desperately hoping to find a (cooked) steak underneath. Ahh … the rites of passage … 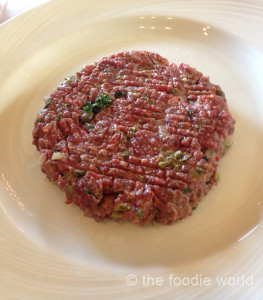 Steak tartare, prepared at the table

Gluttonous husband opted for a veal cutlet. This was a large dish – the cutlet was coated with a cheesy crumb and served with a medley of crisp vegetables and some tiny new potatoes. Again, it got the tick of approval and was dispatched promptly. 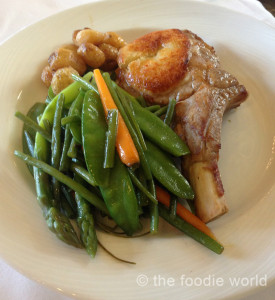 Greedy Girl took a trip down memory lane with the shoulder of lamb with garlic jus and blue cheese potatoes – the same dish she’d had on her first visit. These may not have been the prettiest plates of food but they were generous, hot and tasty. If Greedy Girl was being picky, the lamb and sauce didn’t have an enormous amount of ‘oomph’ and seemed to be missing some of the whole garlic cloves that normally dot the plate, while the blue cheese in the potatoes was seriously strong. This is a dish that has been on the menu since the place opened – the lamb is wheeled around on a heated trolley and carved at the table. 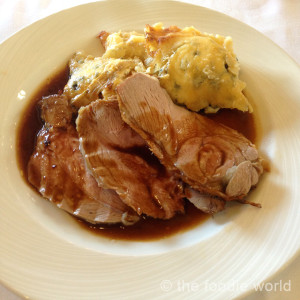 Needing to head for the train to ensure we could get enough space for our suitcases, we asked for coffee, rather than dessert. A lovely little treat arrived. Despite the coffee cup bearing the brand ‘Nespresso’ it actually tasted like real coffee. It was accompanied by a citrus madeleine and a lighter-than-air meringue. Done. 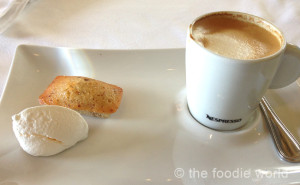 A sweet treat to finish

Le Train Bleu is undoubtedly an experience. Possibly picking a less frantic day than a hot Friday before a long weekend will get you a little more personable service (our waiter was definitely off a short run) and having enough time to enjoy a more relaxed interlude would also be a bonus. It’s not at all inexpensive so be prepared to pay over the odds, but it’s an insight into another world – one frequented at the turn of the last century by the likes of Coco Chanel and Salvador Dali. Sit back, take it all in and enjoy your own moment in history.