Tonka, Melbourne – hot or not? 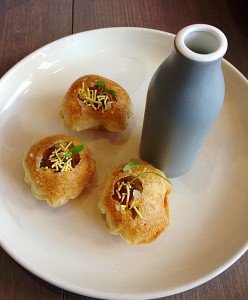 Other Australian cities have tried to emulate Melbourne’s laneway culture with limited amounts of success. The city has transformed derelict commercial spaces with an ever-growing band of bars, boutiques and – of course – restaurants. One of the latest is Tonka.

The restaurant is not actually visible as you turn into the cobblestoned alley off Flinders Lane, but a very helpful neon sign encourages you to trundle down and turn right at the end. The building was once home to a nightclub.

Now, the heavy front door opens into a bar area with a light, bright dining room at the far end, as you go past the kitchen. It’s a sister restaurant to the nearby Coda and a joint effort between executive chef Adam D’Sylva and head chef Michael Smith formerly at fine-dining stalwart Jacques Reymond as well as entrepreneurs Mykal and Kate Bartholomew.

The buzz on Tonka is that it’s ‘modern Indian’ – a nod to D’Sylva’s heritage. The Clean Plate Club, reconvened after Greedy Girl’s most recent international sojourn, decided to check it out one lunchtime this week and found the cuisine to be much more ‘pan-Asian’ with other distinct influences. Helpfully, the Tonka menu includes the dessert listing up front so that educated choices can be made on the volume of savoury items to order first, but more on that later.

One of the noted dishes is ‘pani puri’ (pictured at left). Thank you very much, we’ll have one each. These are delightfully crispy little parcels filled with spicy potato, mung beans, date and tamarind chutney, and ‘aromatic water’ – that’s a herby liquid served in the little bottle on the side. This is absolutely modern Indian cooking – light with some traditional spicy flavours and were delicious. We all commented though, that we expected them to be served warm. Nope – they were cold.

Our dear FullAsAGoog wanted to try another house specialty, the smoked trout served on a betel leaf. The fish was flaked with chilli, coconut, pomelo and kaffir lime. It looked incredibly pretty and FullAsAGoog pronounced it very tasty, commenting that the flavours were balanced. 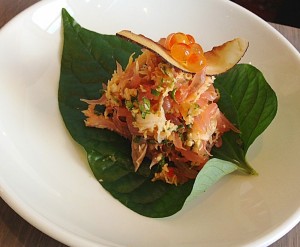 So on to some share dishes. Our waitress alerted us that sharing was the way to go here and most of the mains are designed for at least two people. We managed to stretch them out to three. First up was Greedy Girl’s choice – tuna tartare. Light, refreshing and tasty. The tartare was mixed with pomegranate seeds, ginger, fresh wasabi and a few leaves of coriander. It was served with rice pappadums which provided an excellent texture.

Next up was a crab and green papaya salad – minus the advertised peanuts as requested by our other club member, Nuts About Town. The spanner crab was flaked over the top of a pile of green – punctuated by the occasional cherry tomato. The green consisted of the papaya, coriander and chilli. Again, it was light, balanced and very enjoyable. The texture was also very pleasing and we all agreed it didn’t need the extra crunch the peanuts would have provided. 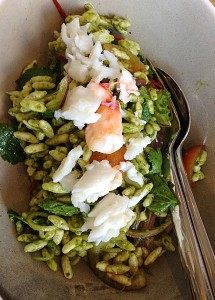 We then moved to something a bit heavier – the Rajasthani duck curry (pictured at the top of this post) with cucumber, mint and buffalo milk curd, served with three sides – roti bread, steamed Basmati rice and a pomegranate raita. We were told this was a hot one. Indeed, we didn’t order the raita but it was provided to help ‘cool things down’ after a bite of the duck. It was a very substantial dish – four pieces sat on top of the slick of red curry sauce but we’re still waiting for the heat hit.

The spice, even to Greedy Girl who rarely eats curries, seemed rather mild. It was very tasty and the duck was cooked very well but the raita wasn’t needed. The ratio of meat/sauce to accompaniments (the greens and curd) also seemed a bit strange – maybe it was because we were sharing and didn’t think of cutting up the ribbons of cucumber to spread them out for each piece of meat. The char-grilled roti was nice and the rice incredibly fluffy. A good dish but spice lovers might need to ask for the heat to be ramped up a tad. 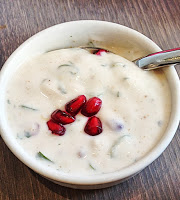 For a newish restaurant, it was an extremely busy lunchtime – almost every table was occupied and, as such, the food took a while to come out. Our dreams of leaving room for dessert disappeared with the passing minutes and, regretfully, we grabbed our coats to head back to work.

The influences here are undoubtedly rooted in Indian cuisine but some of the flavours seemed to take their cue from Vietnamese and other Asian cultures. The food was light and enjoyable and there’s a lot of variation on the menu. It’s definitely somewhere you’d try again to experience more.