Row 34 bills itself as a ‘working man’s’ oyster bar. It’s certainly quite glamorous both in terms of interior decor and the Boston neighbourhood where it can be found.

On a sunny but cool Sunday afternoon, Greedy Girl and gluttonous husband wended their way down Congress Street, past various tributes to Boston history in the form of the Tea Party museum, and hoped for the best to get a table. We’d already tried to book and were told late in the evening was our only option, but limited places were kept for ‘walk-ins’.

Walking in around 5.30pm, the place was absolutely jam-packed – and this was no tourist trap. The floor was full of groups of various sizes, mainly families, enjoying what looked like a Sunday tradition. A table for two was available – but we would be required to be out by 7pm. We took what we could get.

Row 34 specialises in oysters and associated seafood – mainly from Massachusetts, but also Rhode Island and Maine – accompanied by one of the biggest collections of beer Greedy Girl has ever seen. The food menu has the wine and cocktail selection on the back. The beer menu is a separate, double-sided card with draft brews on the front and bottled varieties on the back. Gluttonous husband chose another pale ale ‘Go To’, brewed in Escondido, California, while Greedy Girl had no idea what to choose. The waiter suggested a couple of pilsners and brought over two tastes. She plumped for the lighter Edelherb from Germany. Sorted. Down to the food.

There for a good,  not a long time and bellies still full from Asta the night before, gluttonous husband was the only one in for a starter, asking for a selection of half a dozen oysters natural. You can choose your preferred varieties and mark the sheet that lives on each table, but gluttonous husband asked for the server’s recommendation. Clockwise from the lemon wedge below, he sampled three varieties from Massachusetts, the fourth from Martha’s Vineyard (well, Massachusetts too), one from Rhode Island and one from Maine. The pick of the crop, according to gluttonous husband was the second variety, from Howland’s Landing in Duxbury. 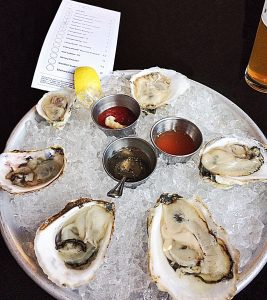 Lots of oyster varieties to choose from

Next up was a hot, buttered lobster roll for Greedy Girl (pictured at the top of this blog) and a local fish specialty for gluttonous husband. The lobster roll was a treat for the eye. To Greedy Girl’s Australian sensibilities, it was a slight shock; the menu said it was presented with chips and slaw. She didn’t expect potato chips. The lobster roll was absolutely perfect. Soft, tasty and Greedy Girl has a new-found appreciation for brioche; the lobster meat was sandwiched in a gigantic slab of buttery brioche and it was a match made in heaven. The slaw and the ‘chips’ actually worked fairly well as a dish.

Gluttonous husband chose another recommendation from the server, baked hake with a mustard crust, served on a rice pilaf. Initially he thought the mustard crust was too strong for the fish, which flaked apart delicately, but combining it with the pilaf softened it somewhat. Taken as a whole, the flavours were quite balanced. The fish itself was very mild. The waiter commented that this is a typically New England way of serving fish. 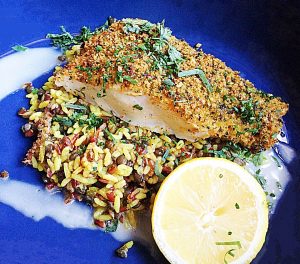 Our lease on the table had not quite expired so we partook of a dessert. Economically described as a ‘chocolate peanut candy bar’, this was served with a slick of salted toffee. It wasn’t as rich as it looks but it was definitely teeth-damaging. The candied peanuts on the top were particularly delicious. 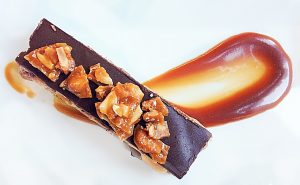 This is a great, buzzy place if you’re looking for an easy night out in Boston. Try to get a booking if you’re heading there in a group, otherwise you risk standing at the bar for a prolonged period.