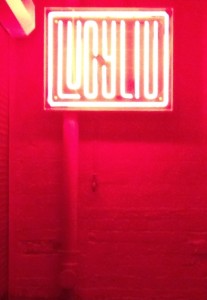 All red on the night

You know a restaurant is hot when the staff call three times to reconfirm a reservation. Such was the case at new Melbourne laneway eatery Lucy Liu Kitchen and Bar, the latest effort from noted chef Michael Lambie.

Melbourne’s laneways just keep getting better and Flinders Lane, once home to a thriving garment district, is full of old warehouses and low-rise edifices that now house some of the most exciting food in this food-obsessed city.

Greedy Girl sallied forth after work with foodie friends FullAsAGoog and Miss Divine. Our booking was at 6pm (with an admonition we needed to make way for new arrivals by eight). We arrived not long after five, intending to prop up at the bar for a drink; there were already people seated for dinner so we also moved straight to a table. This is a groovy-looking place. A striking red corridor gives way to lots of blonde timber, more splashes of red, high tables near the open kitchen that look like terrific spots for groups. Even early on a winter’s evening, it had a great atmosphere.

As you’d expect from the name, and the chef’s pedigree (Lambie was one of the pioneers of fusing Japanese and western flavours in Melbourne at the late, lamented Taxi Dining Room at Federation Square), this is all about Asian food. It’s not Chinese, it’s not Vietnamese, it’s not Malaysian, it’s not Japanese, it’s not Thai. Essentially the menu here takes elements from all the great Asian cuisines and delivers a menu that excites the tastebuds just by reading it.

Settling in with a bottle of white from the Alsace region of France, we were tempted by the ‘let Lucy feed you’ options where the kitchen would send out five or seven plates. Given Miss Divine is pescetarian (and we other girls wanted a very specific dish, more on that later) we opted to choose a la carte.

The table mats are holographic pictures; as such they’re quite substantial and at one point in the evening, Greedy Girl was moved to use it as a wobble board for a chorus of ‘Tie Me Kangaroo Down Sport’ – in her defence, we were discussing karaoke at the time. But I digress. Turning the placemat over reveals the food menu.

We chose a variety of share plates and one larger dish. First to arrive was the kingfish sashimi. An attractive presentation, the fish had a bit of a kick from green chilli and was topped with toasted coconut and some piped dots of coconut cream. For Greedy Girl, the other elements overwhelmed such a lovely fish but it was a tasty dish. 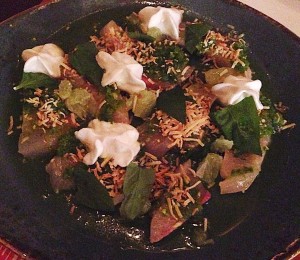 Next, we had soft-shell crab. Under a forest of leaves, tempura-coated soft shell crab was served with a green nam jim – a Thai dressing. The menu described this as hot but Greedy Girl thought it was quite well balanced. 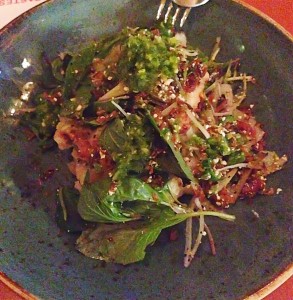 Next were barramundi and scampi dumplings. You can always tell when the wait staff are on the ball; there are four dumplings to a standard serving; our server immediately offered to super size this so we could have two each – and these delicious packages were very quickly hoovered up. The dumplings were very simply dressed with chilli, ginger and spring onions. Yum. 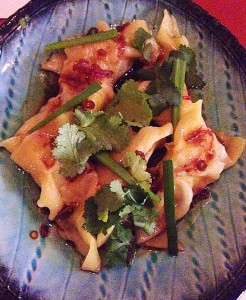 Next, we moved to a dish that proved irresistible for FullAsAGoog and Greedy Girl – Peking duck dumplings. These were served with a homemade hoi sin sauce which was a little thinner than Greedy Girl was expecting. The dish itself was absolutely delightful; the dumplings were filled with a generous quantity of meat but they remained tender. Delish. 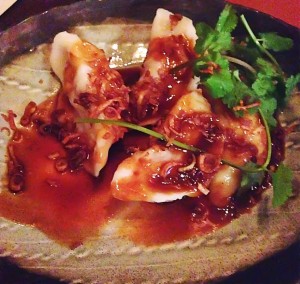 Miss Divine had the calamari dish. The calamari had been tossed in a hot wok and served with red nam jim, pickled papaya and a hot mint salad. It was a pretty-looking combination but Greedy Girl found the dish to be a little crunchy for her liking – the calamari she had was a bit too resistant to the bite. 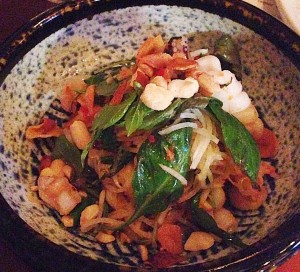 We then finished up with a fillet of barramundi. Greedy Girl feared the black bean and chilli sambal would be the hottest element and requested it be served on the side. Relatively speaking, it was very mild, but the nouc cham dipping sauce was a blast of heat. The fish had a lovely crispy skin and had been cooked perfectly, while the cucumber and carrot salad was a welcome touch. 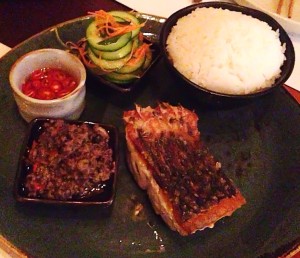 The restaurant, by this stage, was utterly packed but we three still managed to carry on a conversation quite easily – the noise level was steady but not raucous.

It was time for dessert. FullAsAGoog ordered creme brulee. The Asian twist here was it was made with palm sugar and had a delicious little mixed sesame tuille. 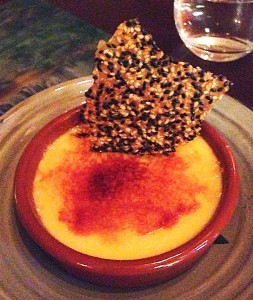 An Asian twist on creme brulee

Greedy Girl had another fusion dish. This was a chocolate and dulce de leche (which seems to be everywhere on menus at the moment) mousse topped with a blood orange foam. The foam was almost fizzy (in a sherbet style) and was a tangy delight. The mousse, while a nice flavour, was quite heavy. 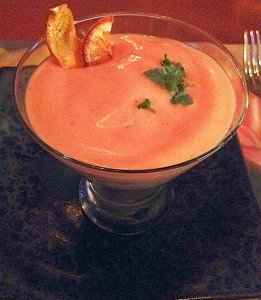 With a full bar and people lining up to get in, we paid our bill and headed for the coat check. There’s a lot to like about this style of food, particularly for a group. It’s made for sharing. Lucy Liu is a great buzzy environment with a host of interesting dishes. It helps, though, if you like your food spicy – not everything is at blistering level but most dishes seem to test positive to heat. 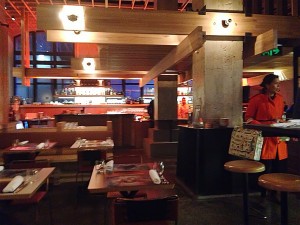