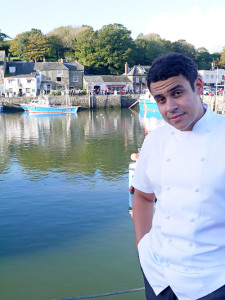 Greedy Girl and gluttonous husband are addicted to TV shows that showcase the work of various chefs around the world. Greedy Girl has a file on her iPad ready to note down the name and restaurant of any chef whose food looks, well, good enough to eat. With the chefs we enjoy most, we often try to recreate some of their flavours and recipes at home – with varying degrees of success.

On a previous trip to the UK, gluttonous husband came away from a day’s tutelage at Rick Stein’s Padstow Cooking School with a full belly and a folder of recipes and ideas. That evening, we headed into the town’s backstreets to Number 6, helmed by the affable Paul Ainsworth, who we’d watched as his whimsical fairground-inspired dessert made it on to the banquet menu during a season of Great British Menu.

While we didn’t have that dish in particular, we did enjoy some inventive and appealing cooking. Check out that review here. It was an enjoyable night, despite the wait staff who were a little over the top.

A fair while after the event (it must be said), Greedy Girl was delighted, upon asking if the Number 6 crew could help her with some photographs for her new blog, that they not only were very prompt and helpful, they also offered a bonus. They’d be very happy to share a recipe for one of the chef’s other great desserts – a bread and butter pudding.

So here it is! We admit we’ve not tried it yet. It’s still summer in Australia as this blog was posted, so not exactly the weather for such a hearty pud, but it certainly seems very straightforward and looks exceedingly glamorous.  As we head into the cooler months here, though we’ll be giving it a try.

A note on the ingredients specified. Given the chef is based in Cornwall, he has easy access to the delectable Cornish clotted cream, mentioned below. As we hail from Australia, we need to find a local substitute and we’re particular fans of King Island dairy products! Everything else should be readily available. We even have our own blowtorch to crisp up the top!

Butter the bread and take off the crusts, cut the bread into triangles. Brush the Pyrex dish with butter to stop the bread baking to the dish.

Build up the bread in the dish like a jigsaw, sprinkling sultanas over every layer apart from the top one; the reason for this is that if you do sprinkle them on the top layer, when it comes out of the oven you will think of rabbits straight away!

Now make your custard:
Bring the milk, cream and vanilla to the boil; meanwhile whisk your egg yolks and sugar together until they become very pale, almost beige.

Pour the cream mixture over the egg mixture and stir with a wooden spoon, then place the bowl over some boiling water and stir the custard until it coats the back of the spoon.

Pass through a sieve – not a fine one, you just want to get rid of the vanilla pod. Pour the custard over the bread leaving a bit behind to top up later.

Leave the pudding for about six hours to soak up the custard, then top up with the excess custard and place the dish in a bath of water and into the oven at 130c; cook for about 25 minutes until it has just a slight wobble.

Sprinkle caster sugar on top and glaze using a blowtorch to create a crispy top and dish up. Enjoy!

The Foodie World offers thanks to the Number 6 team for the recipe and pictures on this post.