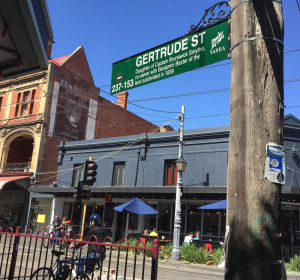 On a sunny Saturday, Greedy Girl and gluttonous husband decided to try being tourists in their own city and headed out to Gertrude Street in Fitzroy to sample one of Melbourne’s great ‘eat streets’.

Gertrude Street is on the fringe of the city proper; while Fitzroy as a suburb has enjoyed a long reputation as having several good foodie outposts, the rise of Gertrude Street has been relatively recent. Foodie Central can be found within two blocks, bordered by two streets – Nicholson (to the west) and Smith (to the east), with Brunswick Street (a future eat streets review!) in the middle.

It’s a long-established area, full of what were workers’ cottages and are now highly sought after as prime real estate. There’s also still a lot of social (public) housing. Fitzroy has always been slightly grungy, compared to its more refined neighbour, Carlton. As such, it attracts an eclectic mix – aboriginal and migrant populations, a fair few older residents who’ve lived in the suburb their whole lives, hipsters and, let it be said, food lovers.

There’s still a lot of Victorian and Edwardian architecture to be found, with many formerly industrial or business spaces now overrun with art galleries, clothing shops and, of course, bars and restaurants. It’s a great place to walk, browse or just sit and watch the passing parade.

Greedy Girl and gluttonous husband had a hit list of venues they wanted to visit. Sadly, some weren’t open for lunch service on a Saturday.  Chef/entrepreneurs such as Andrew McConnell were among the first to move into Gertrude Street. McConnell’s Cutler and Co (closed until dinner service) was one of the first fine-dining restaurants to open in the strip. McConnell has subsequently taken over the Builders Arms hotel (in the next block) and its restaurant Moon Under Water has also attracted a lot of attention. Rather than fill up at one venue, however, we decided to have lots of snacks at as many smaller establishments as possible.

We began with brunch at the eastern-most point of the strip, near the corner with Smith Street (also a future eat streets post). Finding a very pleasant spot in the sun outside Birdman Eating, we ordered a special baked egg dish to share, with a Bloody Mary on the side for gluttonous husband. 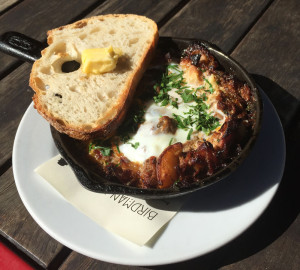 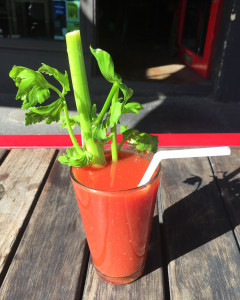 The baked eggs were served in a still-bubbling cast iron dish. The cafe offers a number of specials for this dish and we opted for the lamb and potato version, served with a thin slice of sourdough toast. The flavours were very good – the lamb in particular was quite soft. Usually, Greedy Girl isn’t fond of this texture with meat, she enjoyed the dish. A downside was that the eggs had cooked through (hard to avoid) when a bit of runny yolk would have given the dish more moisture. Still, a good start to the day.

We then crossed the road to head to the Gertrude Street Enoteca. We’d been there before one night after a dinner around the corner in Smith Street and treated ourselves to their special ‘Pirate’ hot chocolate (laced with a fair amount of rum). Given the sun was over the yardarm by this stage, gluttonous husband decided to indulge again. The chocolate used apparently is blended in house. from pure Valrhona dark and Callebaut milk chocolate topped with biodynamic milk. A jigger of dark Jamaican rum gave it an additional edge. To snack on, while we kicked back and listened to their wonderful old playlists, we chose a couple of sweet treats – a marsala and olive oil cake and an escargot. Both were light, although the marsala became a little more bitter in the mouth after a while. 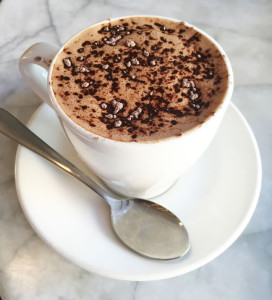 Needing a little wander, we browsed the organic supermarket and a couple of the clothes shops. Greedy Girl was starting to flag though and opted for a coffee at Arcadia. While there are a few cafes in Gertrude Street, this stood out for a key reason – it was absolutely jam packed which leads one to believe things must be pretty good. We managed to find two seats along the low table next to the window, ordered coffees and watched the passing parade. The cafe serves coffee by specialty roaster Campos. Gluttonous husband very much enjoyed his espresso, saying it was full of flavour. Greedy Girl’s piccolo (or caffe latte served in a small glass) was perfectly drinkable but still a bit milky. Still, it was a great spot and the range of food going out looked excellent. 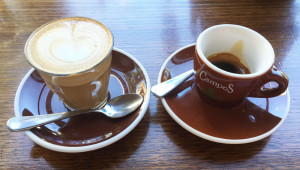 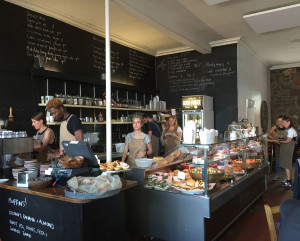 It was time for another walk. We actually diverted into some side streets where an enterprising photographer had set up an outdoor studio for dog portraits – the queue forming was testament to that winning idea. We browsed some bookstores and homewares and decided that finding  spot to sit in the sun would be next on the agenda. We chose The Wilde, a craft-beer pub, where gluttonous husband had a pint of a Quiet Deeds IPA, from two young Melbourne entrepreneurs. It was a pleasant drop (not too bitter, even Greedy Girl kept sneaking sips) and the table in the sun was a welcome respite. 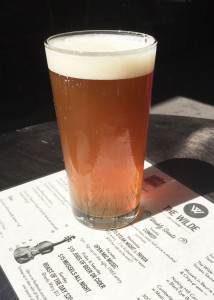 Quiet Deeds IPA at The Wilde

With a little bit of booze under the belt, there was never a better time for some fried chicken. Directly across the road from the Wilde is Belle’s Hot Chicken. We’d actually poked our heads in before we sat down for the beer, to check out the lay of the land. It had plenty of space, so we decided to come back. Hah. The place was absolutely packed.

Serving ‘Nashville-inspired’ fried chicken, Belle’s is the brainchild of Aaron Turner, the chef behind the late, lamented Loam – a destination restaurant Greedy Girl and gluttonous husband had visited several times. Turner has partnered with another chef Morgan McGlone; the ‘Hot Chicken’ incarnation replaces Belle’s Diner and, as you can see from the picture here, most of the decor has been maintained. Apparently both chefs have spent a recent stint in Nashville and couldn’t get enough of the chicken – it therefore stood to reason other people might feel the same. 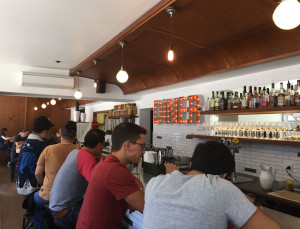 The bar and servery at Belle’s Hot Chicken

The process of eating here is very straightforward, you choose your cut of chicken (we chose the tenders pictured at the very top of this blog), select your level of spice (from the mildest, Southern, which we chose all the way to what the menu describes as ‘Really F-in Hot’) and tack on a side. Most dishes come with a complimentary side – we took the classic coleslaw. There are a couple of other dishes you can have if you don’t eat chicken but Greedy Girl submits that, if you’re not going to partake, you should probably choose another restaurant. Our tenders, which had very crispy breadcrumbs, were served with some slices of pickle, on top of a piece of white bread – an excellent way of mopping up any extra fat from the fryer. It was more-ish stuff, but one serving of the tenders was more than enough as a snack for two people. While packed at lunchtime, Greedy Girl imagines it would be very strongly patronised in the, ahem, late evening. There’s nothing like this sort of food after a big night.

Seriously starting to struggle, we trundled down the slight hill towards another pioneer of Gertrude Street’s food scene, Ladro. This made its name as one of Melbourne’s best pizza shots a great many years ago and has since branched out to open another, larger eatery in Prahran. The Fitzroy space is fairly small, dominated by a large bar and the open kitchen with the pizza oven. By early afternoon it was pretty full with a lot of large groups. Greedy Girl considers that’s the way to go to a pizza restaurant – lots of people, a few pizzas to share and the ability to taste various options. Given we were quite full, we decided to order the pizzette (only available at lunchtime) called ‘Badabing’. It was a crispy, light base topped with pork sausage, tomato, provolone, oregano, chilli and basil. It was quite tasty and the level of chilli was good – it warmed the mouth gradually instead of a huge hit. 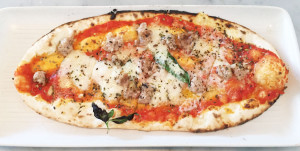 We decided to turn for home. Heading west on Gertrude Street, almost to the end, we spied Casa Ciuccio, an attractive-looking bar and decided to finish our day with a cocktail. Apparently in Spanish, Ciuccio means donkey. In Italian it means a baby’s pacifier. Perching on high stools at the bar, Greedy Girl ordered an ‘Almond Bramble’ cocktail, choosing Melbourne gin, along with Cassis, lemon and almond blossom. It wasn’t overly sweet and very refreshing. Gluttonous husband, having been persuaded to have a little sweet treat, took a Pedro Ximenez Romate dessert wine. 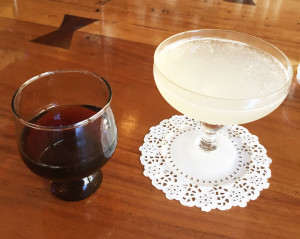 We tucked into the waiter’s suggestion – home made crumpets drizzled with honey and what was described on the menu as ‘berries’ (but turned out to be only strawberries), plus dots of ricotta. It was OK; the crumpets were a bit too doughy for our liking but the plate was certainly cleaned. 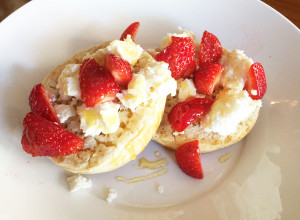 Crumpets and berries at Casa Ciuccio

And we were done. Sun blaring in our eyes, we prepared to walk home.

It was a fun way of spending a day, and really seeing what a famed strip had to offer. It was also an interesting test of how ‘hospitable’ busy restaurants and cafes would be to a couple of people taking up valuable real estate and just ordering a snack. Greedy Girl is very pleased to report, the welcome was warm everywhere. At Belle’s Hot Chicken, where we got the final two seats at the bar, we were still offered a move to a booth when one became available, even though we’d just ordered one dish. Generally, we ate up reasonably quickly and moved on to our next target, conscious of not ‘overstaying’ our welcome, but the level of service was very impressive.