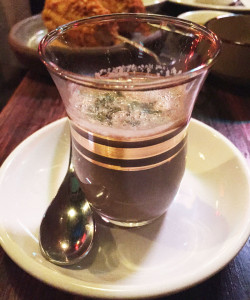 The dish of the night, an amazing wild mushroom soup.

On a cold Melbourne night, pushing through the double entrance doors at Bomba is a nice sight. It’s a very groovy-looking spot, with mood lighting making the most of the long bar and mix of high and low seating. Opting for the late sitting to fit in with the Persian Foodie’s work commitments, Greedy Girl was rather famished by the time we were shown to our corner table and was looking forward to a top tapas feast from a restaurant anointed as one of Melbourne’s ‘newest and hottest’.

Going to a restaurant with the Persian Foodie is always a good test of variety of food and wait staff alike. Given she’s Jewish, shellfish and pork are both off the menu which does tend to limit the options somewhat in a Spanish eatery. Having communicated this to the wait staff, who responded with a very prompt ‘no problem’, we opted to allow them to feed us for what seemed to be a very reasonable price – $45 a head. Ordering a Vina Illusion tempranillo and an Aga rose (most wines available by the glass are Spanish), we settled in and awaited the food, diving into a couple of slices of crusty sourdough to ease the pangs.

And then the dishes started arriving. It was a bit odd. Generally in tapas feasts, Greedy Girl likes to share the dishes – it’s rare that she corrals a plate all to herself (gluttonous husband would be heartbroken) so she thought the way the food was served here to be, well, strange. Instead of both sharing all the dishes, some were suitable for us to both pick at, while others were only suitable for one person to tuck into (nominally, Greedy Girl). It went against the grain of going out for tapas – to sample as many plates as possible within the limits of our bellies.

To start, the Persian Foodie was presented with a dish of olives plus a plate of Blackmore 9+ marble score wagyu cecina. While she demolished the olives, she’s not enormously enamoured of red meat – that was handed over to Greedy Girl who was very happy to scoff it. Soft, flavourful, delicious.

Greedy Girl had before her the capocollo (a traditional Italian pork cold cut) and a coffin-bay oyster. She much preferred the taste of the Wagyu to the other charcuterie and she wished gluttonous husband was there to relish the oyster. While Greedy Girl will eat them, they’re definitely not one of her ‘must haves’. 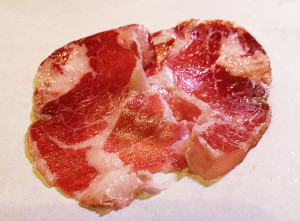 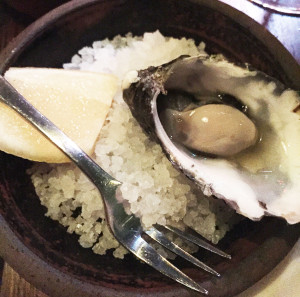 Next up, a dish we could share – leek and manchego croquettes. These were delightful. The filling was bursting with flavour and a beautiful creamy combination and delightful to have some nice hot food on such a cool night. Delish. That was followed by the dish featured above, the little glasses filled with an absolutely delightful wild mushroom soup, with lots of little chunks of mushroom thrown in for good measure. It was absolutely the dish of the night! 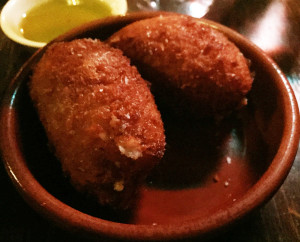 We also shared Charcoal grilled corn with dried maize. This was an interesting combination, not altogether to either of our tastes. The dried maize on the outside was very crunchy and, it had to be said, tasted a little like the corn had been dipped in crushed Cornflakes. No doubt such an expression would be met with dismay by the chef and Greedy Girl branded as a philistine, but, there you have it. 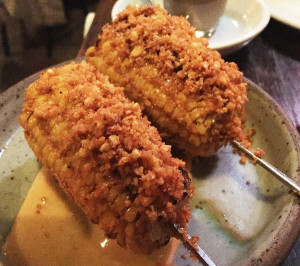 The Persian Foodie did opt to tuck into one of the meat dishes – Moorish spiced lamb cutlets. These were a nice flavour and cooked well, if not as plump and juicy as Greedy Girl is used to from her home-cooked lamb cutlets sous vide. 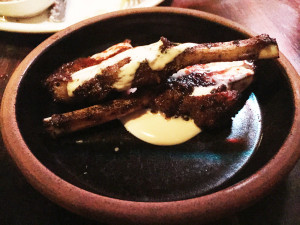 After this, things were again divided up. The Persian Foodie was presented with two plates – quail and wagyu beef skewers, while Greedy Girl was given plates of pork jowl and prawns. The quail was served with pistachio and buckwheat. She pronounced it perfectly edible, if not a rave (apologies for the picture quality – the restaurant is very dark). 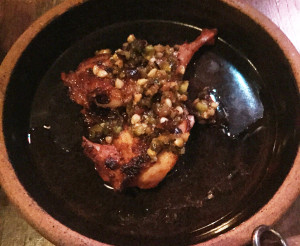 Quail with pistachio and buckwheat

The wagyu skewers were also quite OK. They were 6+ score wagyu rump cap skewers cooked over charcoal and served with with mojo verde (predominantly garlic and coriander) and horseradish. The dish didn’t look outrageously attractive but it had a nice enough flavour.

Greedy Girl was a little dismayed at the servings before her. They were just too big for one person, especially having consumed the rest on offer. The pork jowl had been braised in a Pedro Ximenez sauce and sat on a slick of cauliflower puree. The pork was a nice flavour although a soft braise is not Greedy Girl’s favourite texture. The dish was also just too big and rich for her to finish. 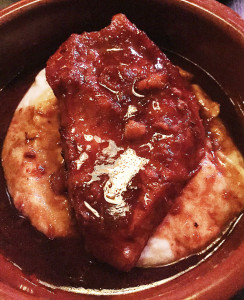 The prawns were presented still with their heads. They were described as Shark Bay king prawns with a pine nut picada – usually made from nuts, bread and garlic. The flavours were nice but the prawns were a bit overcooked and had started to go slightly mushy. 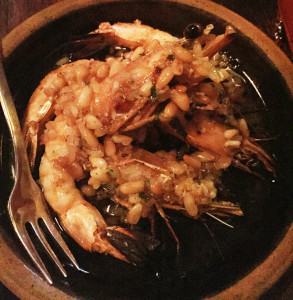 Along with these plates, we were given a giant serving of freekeh salad with cauliflower, almonds, sumac, barberries and mint. It was a bit too citrusy for Greedy Girl who managed a few forkfuls. Defeated. 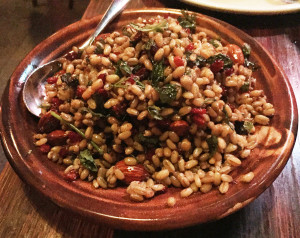 And that was all she wrote. Having already wasted a fair amount of food we didn’t countenance ordering a dessert.

Bomba is a fun place with a good vibe, but the concept behind dealing with two diners and their dietary requirements was a bit odd. Greedy Girl admits she didn’t specify she wanted to share but, that’s one of the joys of tapas.