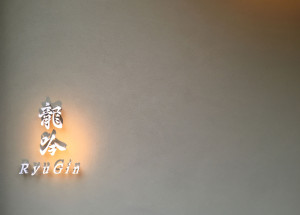 While not as gaudy as some areas of Tokyo, Roppongi’s main street has more than its fair share of nightclubs and whisky bars. Thankfully, Greedy Girl and gluttonous husband were heading for a quiet side street and a restaurant that showcases the finest seasonal Japanese cuisine, RyuGin.

The occasion was Greedy Girl’s birthday and she was excited to see how chef Seiji Yamamoto elevated a traditional kaiseki-style meal to the heights of fine dining. As Greedy Girl writes, the announcement of the 2015 World’s 50 Best Restaurants list was just a week away, but in the 2014 list it was ranked a very respectable 33 and was fourth on the list of Asia’s 50 best, second in Japan to the extraordinary Narisawa.

Kaiseki is essentially the name for a multi-course meal. The approach at RyuGin is highly seasonal, offering 10 courses (plus a refreshing mango soda to start with). Splurging on a bottle of Gosset Celebris Vintage 2002 Extra Brut we settled in, expecting a world class meal of Japaense cuisine with a contemporary edge. We were not disappointed.

The evening’s menu was presented in an envelope with the stamp postmarked for the day of your visit (see the picture at the top of this post). It’s a nice keepsake, particularly if you’re celebrating something. We were asked to peruse the evening’s selections and advise of any dietary issues. It was all good from our perspective but it should be said that this is quite possibly not the restaurant for you if you don’t eat fish. Like most Japanese establishments (high end or otherwise) it plays to the local preference for seafood.

Enjoying the crispness of the champagne, we happily awaited the first course – sea urchin served with fresh ginger and green peas. The vivid orange sea urchin colour was evident but it was coated in a very more-ish onion powder. The green slick you can see on the bottom of the plate is a satiny pea puree. Delish. 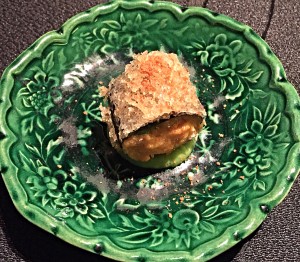 Our next dish was grilled firefly squid with a sudachi citrus scent. The charcoal aroma when the lid of this dish was raised was intoxicating. These tiny squid from Toyama Bay grow to only a few centimetres in length and glow an eerie blue in the darkness of the water. Happily, they were a more appetising colour in this dish, which we both wolfed down. 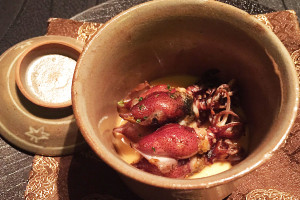 Next up was ‘Owan soup’, a broth consisting of Ichiban dashi, made from kombu and dried bonito flakes, giving the result a degree of richness. It was served with grilled sea perch, a shiitake dumpling and vegetables. Light, fresh and the lacquer bowl was drained to the very end. 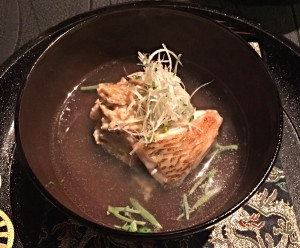 We then moved to an extraordinary-looking plate – seven styles of sashimi. It’s easiest to post the picture first and then to explain what we were eating. 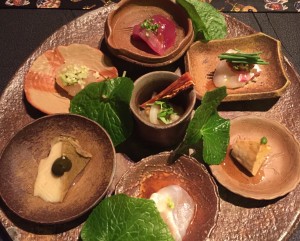 From the top, and going clockwise, we had bonito, sea bream, monkfish liver, tail fish, abalone, spiny lobster and, in the middle, squid with a sliver of dried seafood. While Greedy Girl enjoys the flavour bonito imparts to other dishes, she’d not actually enjoyed it solo before. On our last trip to Japan, a pancake served with bonito flakes at Teppanyaki Ten was downright freaky and the taste was just too strong. Here, however, it was delicious. It was actually one of Greedy Girl’s favourites on the platter, along with another surprise – she thoroughly enjoyed the monkfish liver. Gluttonous husband was amazed at how tender the abalone was. All round, a great assortment.

Next up was ‘kinki fish’ from Hokkaido. Amazingly, this had been stuffed with grilled eggplant, designed to catch all the juices from the fish while it was cooked. It was accompanied by spring vegetables with a sesame dressing. It was a very clever and enjoyable dish. The crispy skin of the fish was particularly good. 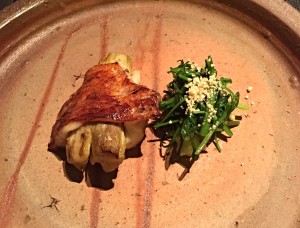 It was time for a little ‘shabu shabu’. Two dishes were placed before us with our own steel bowl of simmering stock and vegetables with a gas flame underneath. We were instructed to pick up a vegetable, dip it into the stock to cook (traditionally you waft it through the water quickly, for as much time as it takes to say ‘shabu shabu’) and then dip it into some sesame paste. Fresh, delicious and light. We were warned not to drink too much of the stock as there was still a power of food to come, but gluttonous husband couldn’t help himself. Most of it went down the hatch. 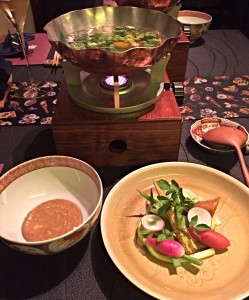 It was then time for a little meat. This was called ‘Sanuki olive beef’ – a breed of wagyu raised on olives! It was served in sukiyaki style on stoneware, accompanied by yam. The beef was beautifully soft and tender and the textures worked brilliantly together. 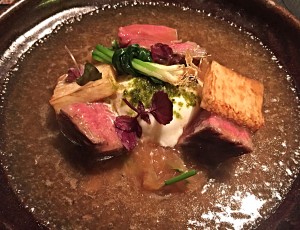 Our final savoury course was a bowl of rice flavoured with cherry blossom tea and a separate bowl of Sakura shrimp from Surugawan Bay. The shrimp were very tiny and served whole. If you look closely at the picture you can see a fair smattering of eyes. Greedy Girl is often a little squeamish around whole fish (of any variety) but these were consumed with relish and they went spectacularly well with the moist and flavourful rice. 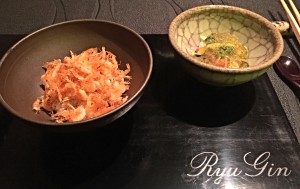 It was time for something sweet. While Greedy Girl finished the last of the champagne, gluttonous husband moved to a dessert wine, specifically a Jurançon, traditionally from the French Pyrenees. It had a lovely nose and wasn’t outrageously sweet.

Our first dessert was described as ‘one piece of strawberry’ and here’s how it is presented at the table. 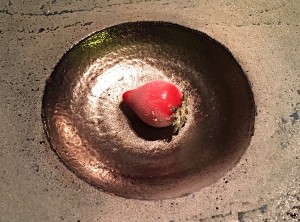 We were instructed to tap the strawberry with the back of our spoon, whereupon it smashed open to reveal a sherbet, over which a warm compote was spooned. Clever, tangy and wonderful. 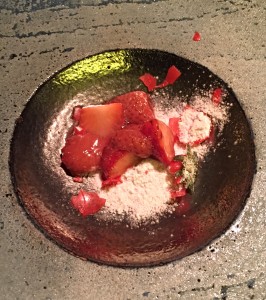 The smashed version topped with a compote

Our final course was sweet flavours of hot and cold sake. Now Greedy Girl doesn’t eat a lot of ice-cream, nor does she often drink sake. Here was a sake-flavoured souffle and sake ice-cream. OMG. This was absolutely amazing. The slight edge from the sake stopped the dish from being too sweet and it was very heartily consumed. Gluttonous husband thought he was in for some extra ice-cream. Hah. It went spectacularly well together. 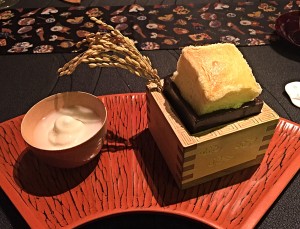 Flavours of hot and cold sake

And we were done, all that remained was to drink a bowl of matcha tea, pay our bill and head out for a much-needed walk to help digest. 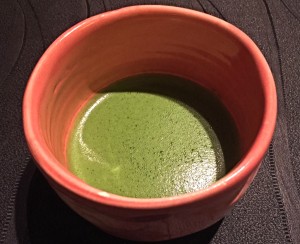 Our friendly waiter, who chatted to us as much as he could during the evening had spent his formative years in Sydney so he was a font of information for Greedy Girl. The pace of the meal was quite fast and we asked whether this was the local preference. He said the chef preferred that no table be left empty, so the dishes came out thick and fast. Essentially your speed of consumption dictates how quickly you will get through the menu and that process needed to be managed by the wait staff, which they did with aplomb.

Non-Japanese speakers have nothing to fear here – the wait staff are multinational. A French table for two next to us looked astonished and then delighted when one of the wait staff came and asked them in French if they’d like a glass of champagne to begin.

RyuGin is quite a superb experience with beautiful food and a relaxed atmosphere and worth making the effort to get a reservation.

Don’t be put off by the plethora of rules and requirements given to you at booking. We’d been warned not to wear perfume (easily complied with by gluttonous husband, but Greedy Girl needed to remind herself) and that the dress code required something a bit smarter than shorts and flip-flops (not a problem there). We’d also been told we were not to take photographs inside the restaurant with the chef asking all patrons to focus solely on the time and place. Chatting to our friendly waiter, he said photos of the food (without flash) were fine but not to take shots of the wider interior and Greedy Girl was a very happy camper, having resigned herself to blogging without any visuals.

One final tip: if you’re visiting Japan, get your hotel to make a reservation for you. Initially we asked a Tokyo-based friend to try to get us a booking but their policy was firm – non-residents need to request a table via their hotel’s concierge. There is also no provision (currently) for online bookings.