When a chef has a stint at the famed Fat Duck on his resume, it gives rise to a certain level of expectation for a diner. Greedy Girl was intrigued when a coupon dining offer landed in her email inbox for Platform 270, at the Doubletree by Hilton in Melbourne’s Flinders Street.

The chef is New Zealand-born Tony Moss, who completed an internship with the Fat Duck in 2004 and has worked on the picturesque gastronomic destination of Waiheke Island (just off the coast of Auckland) and in Shanghai. All good so far.

Sadly, we picked a diabolical night to go out eating, with Melbourne in the throes of an extremely chilly start to winter. And therein started our issues. While the foyer and the interior decor of the restaurant is quite modern and attractive (as you can see from the picture at the top of this post), the design of the entrance leaves a lot to be desired. Two very large automatic doors swing open every time a pedestrian passes by. In busy Flinders Street, just across the road from the city’s main train station, this happens very frequently.

On a freezing night, regular blasts of cold air swept through the foyer and into the restaurant, past an unlit feature gas fireplace. It was so cold, gluttonous husband kept his heavy jacket on throughout proceedings and Greedy Girl needed to keep her heavy coat wrapped around her legs. Initially we were shown to a table in the middle of the room – fully in the path of the cold wind. We asked to be moved but still couldn’t warm up. One hopes the air-conditioning fares better in the blaring heat of summer than the heating did in the chill.

Our coupon allowed us to choose a starter and main course each as well as a glass of wine from the Bay of Stones listings. Despite choosing dishes that probably would have worked better with a white, we both opted for the shiraz, not needing anything further that was chilled. Pleasingly, the wine was a good temperature although Greedy Girl considered her pouring to be on the skimpy side.

As is our custom, we enquired whether we could just share a starter and then share a dessert. That request was denied. It seemed odd that the price point of the starters was an average of around the $20 mark, while the desserts were all priced at $14. Ne’er mind. We were happy to play by the rules.

The restaurant has a large, open kitchen at one end, with a few upholstered booths and some atmospherically-lit wine storage. The overall effect, with bare concrete calls and exposed pipes is industrial-chic. We were pleased that the attention to aesthetics was matched by the food – the plates were all presented appealingly. First up for Greedy Girl was what the menu termed a parmesan and Dijon mustard creme brulee, served with bitter leaves, slices of crisp potato and an orange chive dressing. Greedy Girl was shocked to find this dish was cold, but nonetheless dove in. The custard wasn’t particularly flavourful and really needed the other elements. The crisp potato was probably the best thing on the plate. She had no qualms about handing half of this dish over to gluttonous husband. 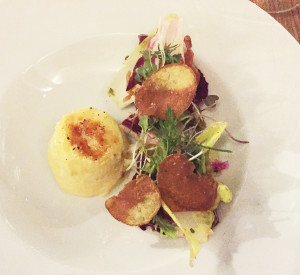 Gluttonous husband took the crab ravioli with prawn bisque, roast tomato and basil sorbet. The bisque was presented at the table separately in a small glass bottle and Greedy Girl wishes she’d been quick enough to take a photograph of the plate before it was poured over. The bisque, very dark in colour, absolutely dominated the dish, leaving it impossible to taste the crab and left a rather bitter aftertaste in the mouth which wasn’t pleasant. Greedy Girl couldn’t discern any of the basil sorbet. At least it was warm. 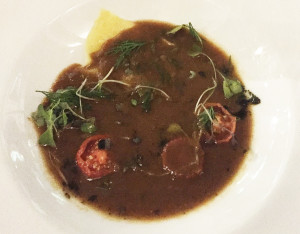 And so to main courses. Gluttonous husband took the duck breast with beetroot, goats curd, orange and baby herbs. There was also some nice-tasting potato on this plate. The duck looked to be cooked reasonably well and the plate again was presented nicely but the meat had no real flavour. Greedy Girl doesn’t enjoy beetroot so tasted the meat only. Gluttonous husband commented that the dish was dominated by the beetroot (the little yellow items you can see on the plate are thinly-sliced yellow beets) and if the goats curd was on the plate, he couldn’t taste it. 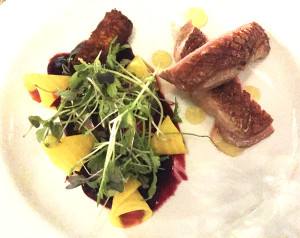 Greedy Girl had the dish of the night – twice-cooked pork belly. This was a large serving and the pork had crispy skin – a big plus. It was served with an apple and tarragon slaw, black pudding and cauliflower cream. The pork was reasonably fatty but it melted in the mouth. The skin was a welcome texture but there was a huge amount of salt rubbed into it and embedded, so that it couldn’t be picked off. The accompaniments were fine. The slaw was a nice touch and the cauliflower cream was smooth. The black pudding was on the verge of being burnt. Still, it was far and away the most successful dish we had. 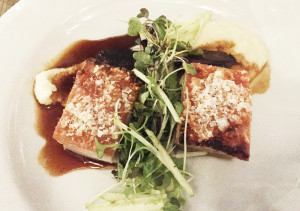 Draining the remainder of our shiraz, we prepared to depart. We were just too cold to stay and weren’t sufficiently captivated by what we had to want to pay extra for a dessert.

And therein cuts to the heart of why restaurants offer coupon dining. We got a definite sense that we were being treated as somewhat less deserving of attention because we were in ‘the cheap seats’. If Greedy Girl were a restaurateur and trying to build a clientele through the use of social buying-site coupons, she’d want to impress the pants off her customers so they’d (a) recommend the place to their nearest and dearest and (b) come back because they wanted to try more. This failed on both counts. Coupons need to showcase the very best a restaurant has to offer rather than fill spots on a dreary, quiet night.