If ever there was a city that catered to the rich and famous, Venice is the real deal, especially some of the swankier luxury hotels. The Hotel Cipriani (in relatively recent times, party central for the George Clooney wedding) is on the island of Giudecca, a short boat ride across the lagoon from San Marco.

Greedy Girl and gluttonous husband, who almost always opt for the more workmanlike modes of transport, took a Vaporetto rather than shell out a minimum of 70 euros for a water taxi to get out to this extraordinary venue. The hotel also has a private landing at St Mark’s with a water taxi specifically for its guests.

We were there to try Oro, considered to be the best restaurant in Venice. It’s right on the water, with a beautiful view, but not the most iconic one – that belongs to the slightly more casual Cip’s Club, which looks back towards St Mark’s and is on the other side from Oro.

The hotel was founded by the inventor of the Bellini cocktail, Giovanni Cipriani. Greedy Girl generally not being enamored of sweet cocktails as an aperitivo, opted for a refreshing glass of prosecco in an alfresco bar abutting the restaurant as we waited for the appointed hour.

Everyone speaks English here; indeed Greedy Girl didn’t hear Italian spoken the entire evening and the service is warm and engaging. The room is imposing, with plush carpets, upholstered seats and statement lighting. Shown to a rock star table overlooking the water, we felt very pampered and eagerly perused the menu. The excecutive chef is Davide Bisetto, who apparently earned two Michelin stars when he worked in France. Our waiter told us, however, that Oro is yet to win the coveted gong in its own right. Making the most of our lease on such a rarified piece of real estate, we decided to have the tasting menu rather than order a la carte.

After making some selections from the bread trolley, including an amazing ‘butter bread’ (basically a croissant but without any discernible sweetness), we sipped more bubbles and waited for our first course, a steamed turnip with red pepper sauce, squid ink and cod mayonnaise. The texture of this was very good and the tastes were enjoyable. It was quite a light way to start the meal. 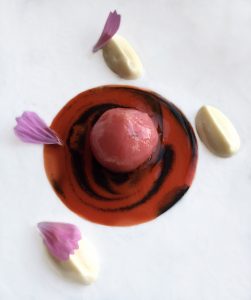 Next up was one of the best dishes of the night, known as ‘Mr Pomodoro’. This was tomato in various luscious forms, plus stracciatella cheese and baby shrimp from the lagoon. The cheese was rendered as a foam on top of a number of different tomato varieties. Italian tomatoes are delicious, especially this time of year, so this dish was bursting with flavour. It was served with a clear, cold tomato consomme. Delish. 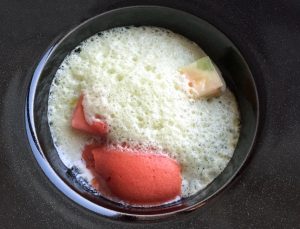 Our next dish was the plate featured at the top of this post, tuna with beetroot and what the menu described as Venetian ink sauce, which is a combination of squid ink, ponzu and soy. The tuna was done in two ways – the ruby red piece on the bottom and a cooked, whipped variety on top. It was beautiful fish, but a bit overwhelmed by the sauce. Thankfully for Greedy Girl, the beetroot was barely discernible. A very pretty dish though.

We then moved to foie gras-stuffed tortellini with green turnip sauce, anchovy juice and jamon foam. Again, a very artistic plate, but the flavours just didn’t really gel for Greedy Girl. She was also a bit alarmed that this was our ‘meat’ course for the menu. 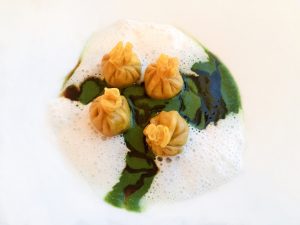 Next was a dish synonymous with the north of Italy – baccala (apologies for the picture quality, the room was very dark by this point). The salt cod had been steamed and served with a baccala sauce and corn. This was a real disappointment. The fish was very chewy and not at all attractive in the mouth. Not having had a lot of baccala, we enquired of the waiter as to what texture we should be experiencing. He said it should melt in the mouth. Okey dokey; not in this lifetime. We left most of it behind. 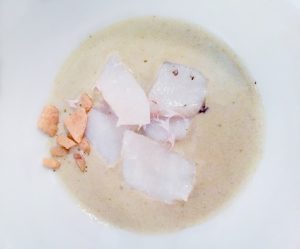 Greedy Girl excused herself to head for the rest room. In recent times, apparently this area of the hotel has been renovated but what the designers failed to incorporate were, ahem, facilities. She was directed past the hotel reception and down a corridor. On her return, gluttonous husband said he’d told the wait staff we weren’t impressed with the fish course. Shortly thereafter, a replacement dish was brought to the table with the restaurant’s compliments. This was Kobe beef ‘shabu shabu’ – strips of raw meat cooked in a light and delicious hot broth. A nice savoury note to finish on. 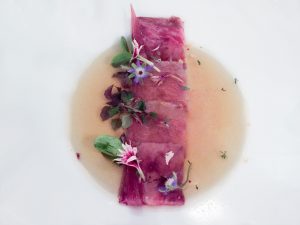 We moved to desserts. First up was a light and refreshing rosewater ice with raspberries. This went down a treat. 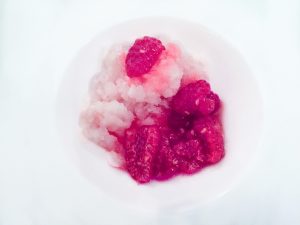 Next was a quite odd combination; blueberries (fresh and a quenelle of a sorbet) with goat’s curd yoghurt and a herb sauce, on top of slices of a very tart green apple. It didn’t really work; Greedy Girl isn’t generally fond of the use of any type of curd in sweets and this didn’t change her opinion. The apple was also very dominant. 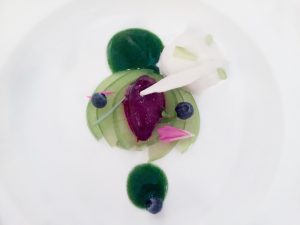 Done. We opted not to have coffee at such a late point in the evening, wanting to sleep again sometime in the next week and prepared to depart. First though, there were some further sweet treats; a hibiscus, cherry and grapefruit jelly popsicle and some shards of chocolate shaved from a gigantic block wheeled by the table on a trolley. 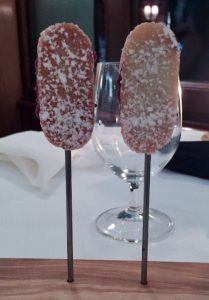 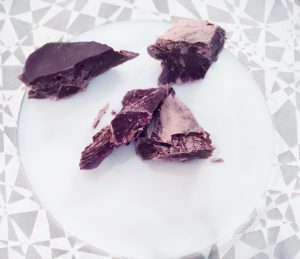 While the meal, for the most part, was quite enjoyable, there was no real ‘wow’ after the butter bread selected from the trolley at the start, which is a little sad. Perhaps our expectations were too high but, as one of the most expensive meals we’ve ever had, we were entitled to them.