Where to drink Florence: Spumantino

The food, wine and travel community on Twitter is amazing. In Florence, we had a standing offer to catch up with translator/traveller/sommelier/foodie @ricasoli99 AKA Katarina who said she’d be very happy to show us some of her favourite spots.

Katarina is Swedish but has lived and worked in Florence for 16 years. A student of wine, she knew exactly where to head – Spumantino.  On their first evening Greedy Girl and gluttonous husband had walked past this bar and didn’t give it a second glance – it’s right next to one of the city’s tourist magnets, the Ponte Vecchio. We dismissed it as likely to be a tourist trap. How wrong we were.

Spumantino al Ponte Vecchio (to give the bar its full title) is part of the Verrazzano wine group and showcases the Castello di Verrazzano winery, in the heart of Tuscany, between Florence and Siena. The castle’s roots can be traced back 1000 years but it’s most notable, history wise, for being the birthplace of Giovanni da Verrazzano, explorer, and discoverer of New York Bay; the bridge between Brooklyn and Staten Island was named for him. The castle was taken over by the Cappellini family in 1958 and the winery rebuilt.

Chianti is the way to go here. We sampled a range of them; Greedy Girl always believed Chianti was a blend but it can be 100 percent Sangiovese. Her first glass was the Chianti Classico Riserva, a blend of Sangiovese and Canaiolo – the latter being a typical Tuscan grape used in dry red wines (although it is grown in other areas of Italy and also has a white variety). 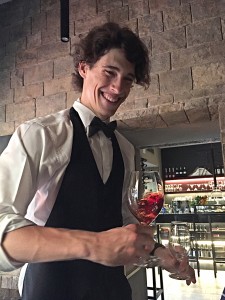 Wine is a serious business here

Wine is a serious business at Spumantino. The waiters taste before pouring glasses for the customers. A fraction is put into the glass, swirled, and decanted into another, smaller glass for the sommelier to check. If it passes muster (and we didn’t see anything to the contrary), a taste is poured for the parched drinker. A delightful drop; a deep ruby red and lovely berry aromas. Greedy Girl was well pleased. Gluttonous husband took the Chianti Classico, from the same blend. It was possible to taste the difference; the Riserva seemed to have a fuller, rounder flavour and apparently is only produced in top vintages.

We were up for another round. Greedy Girl took the Gran Selezione Sassello, while gluttonous husband stumped up for a Supertuscan Verrazzano Bottiglia Particolare. His was a blend of Sangiovese and Cabernet Sauvignon. It was very robust and not as enjoyable as the Chianti. Greedy Girl’s wine was 100 percent locally-grown Sangiovese. It was a nice drop, but she preferred the Sangiovese she had in Bologna at Al Sangiovese.
Of course, being Italy, when you drink there are some snacks thrown in to sweeten the deal. We had platters of grissini, as well as some yummy little focaccia with tomato and mozzarella. 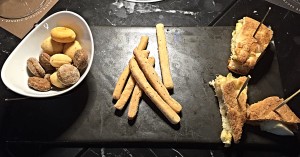 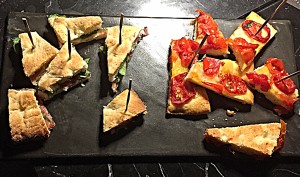 Done. Off we went to dinner, but managed to sneak in again on the way back for some amazing digestivi and a couple of little cakes.

Spumantino is a great spot. We ended up going back the next night for a cold and refreshing glass of rosato. It’s not the biggest bar in the world, but it’s certainly atmospheric and a terrific spot to sit, even on the hottest nights. If you snag a table outside, prepare to be misted by the little water sprays that gush out every few seconds and, of course, to deal with the clouds of cigarette smoke. It is, however, a lovely view next to the famed bridge and down the Arno River. 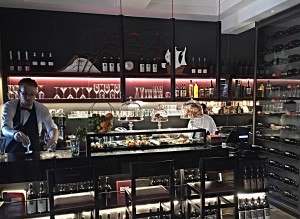