Sydney coffee: Sundays are too far away

What’s great about visiting Sydney? If you’ve only a couple of days and you’re limited to the central business district, it’s pretty easy to fill in time – great restaurants with a view such as Cafe Sydney, Sailors Thai or Bennelong Cured and Cultured offer a chance to sit down and take in the surrounds, followed by walks through the historic Rocks, Bridge climbs, meanders through the Botanic Gardens. In short, anywhere near the water gives you the ‘postcard’ experience.

But exploring the rest of the city, particularly on a Sunday, can be a little underwhelming, especially if what you seek is Greedy Girl’s preferred way of starting the day – coffee.
In recent years, Sydney coffee has come a long way. Those of us who hail from Melbourne (Australia’s second biggest city) have sniffed with disdain at most of the attempts to create a decent cup. This, happily, has changed.

But the search for coffee in the city on a Sunday morning can be frustrating and time consuming. Simply put, Sydney’s CBD may as well flash up a giant ‘closed’ sign and that’s where Melbourne has it all over its northern neighbour, in Greedy Girl’s humble opinion. The tale of two cities sees Melbourne open for business, every day of the week, while Sydney’s streets are eerily quiet on a Sunday morning, save for those tragics making their way home from the night before.

Looking for a coffee fix on a recent Sunday morning, Greedy Girl was resigned to a rather long trek from her hotel near Circular Quay. The only cafe on her radar open on a Sunday morning was on the city’s eastern fringes – a good 25 minute walk. Donning the walking boots, she and gluttonous husband headed out.

Even on Saturday, Sydney coffee is nowhere near as ubiquitous as a weekday. With the absence of office workers, many outlets (good and not so good) close down. Indeed, the previous afternoon when Greedy Girl caught up with her friend The Hipster, she asked him what was open for a coffee nearby. ‘Starbucks,’ he offered. Greedy Girl informed him that if he preferred to sit there, the conversation between them would need to take place via text message. Thanks, but definitely no thanks.

On the Saturday we’d wandered into the Strand Arcade, checking out Gumption. This is a great little hole-in-the-wall spot with a host of bench seating under the atrium. Part of the Coffee Alchemy group, a specialty roaster from the city’s inner-western suburbs, it’s a sight for sore eyes.

While Greedy Girl has no information on the type of beans being ground that particular day, her piccolo and gluttonous husband’s espresso was full bodied and round. Service from the girl who brought our order out was also delightful – it’s common for espresso drinkers to be given water on the side but she offered it to Greedy Girl as well for her piccolo. A very nice touch in an area of Sydney that undoubtedly attracts a lot of tourists. 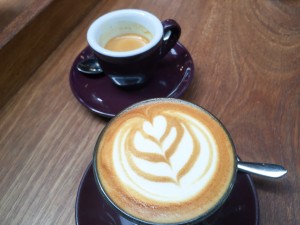 A happy way to start the day 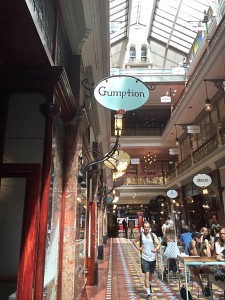 Greedy Girl got gluttonous husband to immediately enquire whether they were open on Sundays. 11am! Greedy Girl was gobsmacked; how could she survive without coffee until 11am? But this is a big pointer to how early (or not) Sydney gets going of a Sunday. Most shops don’t open in the precinct until around 10.30-ish so that’s the way things are.

We’d resigned ourselves walking down to the far side of Hyde Park to Joe Black on Sunday; Greedy Girl had stalked them on Facebook and they’d kindly sent her a note back saying they opened at 8.30am. Much more civilised. Off we trundled, walking near the Strand Arcade in George Street.

Gluttonous husband cast a forlorn look down its main thoroughfare and saw, huzzah, people perched at high tables drinking coffee! This was the other cafe along from Gumption, called Romolo espresso e cucina. Greedy Girl had checked them out online and all signs also pointed to them not opening before 11am. We swerved in, found a bench seat and eagerly anticipated our fix.

Indeed, Greedy Girl had been there the afternoon before with The Hipster. Clearly she doesn’t catch up enough with The Hipster, not being as attuned to his exceptionally dry humour when he initially suggested Starbucks. That was a joke, he claimed, adding that he wouldn’t be caught dead there, unless there happened to be no other possibility for free wi-fi. Greedy Girl has some empathy; the last time she went to Starbucks was likewise for the wi-fi, having been lost in the wilds of Tokyo.
Placing our standard order, the coffees that arrived looked reasonably decent. Here’s Greedy Girl’s piccolo. 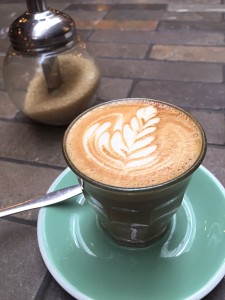 A piccolo at Romolo

It looked bolder than it tasted being a little on the weak side. Greedy Girl always opts for a piccolo when travelling, in the belief that the coffee-to-milk ratio would be in her favour to get a robust brew. This was drinkable but unremarkable. It did have one very big thing going for it though – Greedy Girl didn’t have to march kilometres to the city fringe.

We did move on to Joe Black’s which is in a side street off Hyde Park. There’s no signage visible from the footpath but a very welcome aroma emanating from the front door. Mmmmmmm, bacon, drool … Alongside our standard coffees, we decided to share a bacon and egg roll – breakfast of champions. Rather delicious (and patriotic) it was too.

The coffee here is produced from a range of single origin beans (for espressos) but no information was readily available for the coffees presented with milk; we had lunch reservations and needed to scoot off. It was, however, a welcome interlude. The food was good, the atmosphere fun and the coffee quite drinkable.

For our final morning in Sydney (a Monday) we were spoiled for options, but we decided to head to Castlereagh Street to Pablo and Rusty’s. This is a chain of coffee shops with others on the other side of the harbour. We’d initially looked at sampling the coffee here on Saturday but couldn’t face the queues (not a huge amount of options available for coffee lovers of a Saturday either). We decided to battle the morning-tea crowd from the nearby offices.

This is a groovy-looking place with a number of different coffee stations, presumably outputting different styles/beans and a small food menu. It was utterly jam-packed and, it turns out, for good reason. Without a hint of hype this is possibly the best coffee Greedy Girl’s ever had in Sydney. The coffees (pictured at the top of this post) are bursting with flavour and strength. Not necessarily the best choice for those coffee drinkers who like a weak brew but for Greedy Girl, heaven in a cup.

Generally, Greedy Girl’s advice to anyone seeking coffee in Sydney’s CBD is, well, not to. There are very good brews to be had outside the city, especially in areas like Potts Point, Darlinghurst and Surry Hills, or across the water in such suburbs as Manly and Mosman. That’s not a huge positive for time-strapped or transport-challenged visitors. Certainly, Sydney is one of the world’s great cities. It just doesn’t need to be quite so sleepy of a Sunday morning.