Travel tips: Sauna etiquette in Europe – to be or not to be naked

Upon entering the steam room of the delightful sauna facilities at the Müller’sches Volksbad last weekend, your correspondent came across a woman kitted up in a one piece black Speedo swimsuit and matching shorts doing the downward dog in 45 degree heat and swirling mist. A couple of things to note: one, the steam room is like it says, full of steam, therefore wet and very slippery everywhere and two, sauna yogi chick (SYC) broke the German sauna rule – no swimming costumes.

Two minutes after I’d sat down in my sarong (this is acceptable), the Saunameisterin peered into the room, entered and while shaking her finger at SYC (who turned out to be American) said in clipped English: “zis iss not allaut” and indicated she must leave. Gott Sei Dank! I was thinking yoga should be banned from steam rooms and I experienced a degree of schadenfreude – the first time I visited this sauna donned in a bikini, swanning around in the Turkish bath, the Saunameister while pointing at me in my swimmers, berated fully naked husband with, among other things, “das ist nicht erlaubt!” (ironically my German is better than naked compliant husband’s). It seems naked is good … but only up to a point.

So what is sauna etiquette in Europe? I will share my experiences in Germany, Italy and Spain. It depends on where you are but in public baths, sauna/spa and hotels in Germany (and my guess Austria and German-speaking Switzerland) – cozzies (a very Australian word for swimsuits) are verboten – they believe them to be unsanitary. So too the Scandinavians. In Granada, at the historic Hammam Al Ándalus Arab Baths, there are strict rules on where you can and can’t walk in shoes, and swimsuits are definitely a must. I found these baths a little disappointing – dark, a bit boring, couples apparently doing slightly questionable things under water, and a high chlorine content. And while the architecture there is definitely something, you get a little blasé after Al Hambra; I wished there was a Saunameister around to keep things clean, in all senses of the word.

In the Italian Alps I stayed at decent three-star hotel in Bolzano, where it was also cozzies only please in its downstairs sauna/spa area. However in Merano’s highly rated modern Terme Merano swimming pool/sauna facilities, I was roundly told off for wearing my sarong by a male client while he said nothing to my husband in his towel. The Saunameister did however intervene and say something in Italian to both of us which translated to: you must be naked. The Italian client later went on to dob in lots of other tourists all donning towels and cozzies in the sauna.

Terme Merano is in a gorgeous location with the Alps as a backdrop. There are large outdoor swimming areas and pools with salt water and thermal water at all different temperatures with various waterfalls, water spouts and jets. There are however too many kids/parents for the facilities to be clean – your correspondent did not stay in the pools for long. 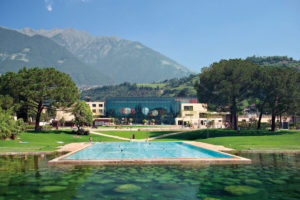 At the foot of the alps. Picture courtesy Terme Merano/Therme Meran/Tappeiner

The sauna area was quiet but busy, reasonably clean but not that clean, there is a large variety of rooms but the thing that annoyed me were the smells weren’t right – too strong on mint in the 45 degree sauna and not quite the right mix of ‘relaxation herbs’ such as chamomile in the steamroom. Funnily enough, there were recommendations/rules for the sauna which included not eating immediately before a sauna and no physical activity in the sauna for health reasons (SYC take note!). 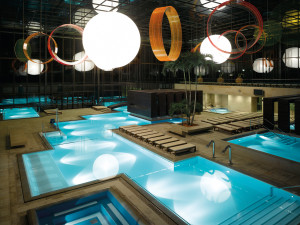 Now back to the Müller’sches Volksbad. God bless Germans and their sauberkeit (cleanliness)! I haven’t been to a cleaner public pool/spa/sauna facility. Several German saunas have this unmistakable, pine/eucalyptus smell, – Germans use mountain pine oil called latschenkieferöl – and my Finnish friend who, of course, is an expert in saunas assures me the Müller’sches Volksbad facilities are quite good, except they allow the Finnish room to get too dry.

The sauna and pool are also worth visiting for the stunning art nouveau architecture inside and out. As its name implies, the Volksbad was specifically designed for ‘the people’ right from its inception in the late 1800s and at the time of its completion was the most modern and expensive pool in the world at a cost of 1.8 million gold marks. Wow, what an investment! It’s a massive structure with two medium-sized pools, sauna facilities, corridors of 1920s-style lockers, soaring domed ceilings, with plenty of natural light and very cosy in winter. It has certainly stood the test of time.

Some of the sauna facility highlights include the Roman/Turkish bath with a small domed ceiling along the lines of the Pantheon, where bathers are watched over by two giant gargoyle; it’s a similar story in the pool areas but with more intricate ceilings. There are lovely little touches throughout – limestone hand basins with small brass gargoyle head taps, ornate light hangings, bust heads of famous Germans, and traditional Bavarian paint colours of white, pale yellows and greens – it all hangs together really well; this place is tastefully done.

There are five sauna rooms ranging from 45-80 degrees: the steam room is all limestone with Roman style thick cut benches, complete with a three tiered fountain for cooling down; the other rooms are white with wooden slat benches and have ceilings with broad heart-shaped cornices. There’s also an ‘iron-maiden’ ice cold shower, and free salt and honey at 8pm every night.

The facilities are not just clean, but also well-kept and it’s safe for all to go bathing alone. The Saunameister regularly patrols for people not obeying rules, so if you are into saunas for any kinky reason, look elsewhere. As with all German saunas/spas, there is a quiet room and a newly renovated outdoor area. 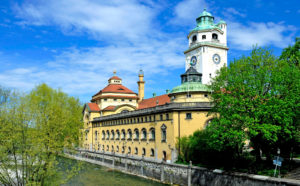 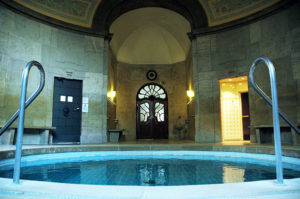 To top it off, there’s a typical Munich cafe/restaurant (Italian and Bavarian classics) on the ground floor with a lovely garden for the warmer months. The meals are usually in the good range, so too the cakes. The coffee and beverages are excellent and it’s very reasonably priced. If I go for a swim or sauna after 6pm, I like to stop off and have a German wheat beer or Lillet berry aperitif. The crowd is more than just swimmers – it’s popular with English speaking expats on weekends and lots of locals, but not overly crowded it’s uncomfortable. This is one of the finest swimming/sauna facilities in the world and I would definitely put this on my list of Munich highlights.

With thanks to Terme Merano and Müller’sches Volksbad for the use of photographs in this post. The picture at the top of this post is courtesy: M. Baeder.