Momofuku Ssam Bar, NYC – the day after the night before

Momofuku Ssam Bar is one of those restaurants you just can’t help returning to. It has all the elements – a fun spot, good drinks and food that is absolutely perfect for the day after the night before.

It is, however, not somewhere that’s likely to be high on your list if you don’t eat pork. There are other menu items, but this is the place for Korean American chef David Chang’s patented pork buns.

We’d been to the Back Room on the Lower East Side the night before, drinking Moscow Mules into the wee hours. Not only was Momofuku Ssam Bar arguably the perfect place to replenish after a big evening out, it was staggering distance from our home away from home on the Lower East Side – on the corner of 2nd Avenue and 13th Street, in the East Village. Huzzah!

Taking a seat at lunchtime at the long bar (we were very lucky to avoid queuing), we settled in, intending to have a selection of our old favourites. And that’s exactly what we did, but there’s always something new. Momofuku Ssam Bar has been around for a fair while now. We made our debut there five years ago, again seeking it out after a big night. Last NYC trip we also dropped in for a feed of buns (and more), detailed in this blog post. It was actually established in August 2006.

But it keeps evolving. Apart from the small standard menu, there’s also now a list of “county hams” to choose from. We chose a plate from Finchville Farms in Kentucky, which the menu said was soft, mild and low salinity. Given Greedy Girl was having her fill of, ahem, salt during her quest to track down the perfect Margarita, she thought a lower-salt ham might be a healthy option. The generous serving of thinly sliced ham was served with crusty baguette and what they termed “red eye gravy”.

As the dish was laid before us, we commented that it looked particularly appealing. The waiter said the sauce was “yummy”; when we got his attention again, we asked exactly what red eye gravy consisted of. He didn’t know, which was a slight worry, given he’d already told us how delicious it was. He did, however, come back a little later and informed us it was coffee-based; usually it also includes rendered ham fat and stock but given where we were this was also a fraction spicy. Delish. Other gravy recipes Greedy Girl has researched give a rather runny result but this was almost a cross between a mayo and a peanut butter in texture. 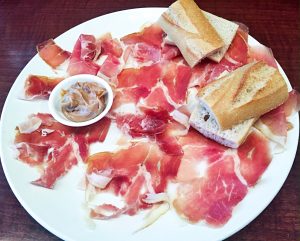 Gluttonous husband was availing himself of an ale by one of his favourite American producers of IPAs, Lagunitas, out of California. This was a “Little Sumpin’ Sumpin’ Ale” – it was a good departure from his preferred IPA style, a little less bitter and hoppy but still with a little kick. Greedy Girl was, sigh, contenting herself with water. A little later on, she spied a bloody Mary on the cocktail menu, served Asian style with togarashi (a Japanese spice blend) and spring onions. Gluttonous husband pronounced it very satisfying. 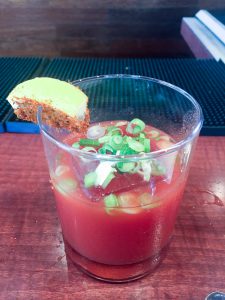 What else but a bloody Mary?

But we were there for food. Next up were the signature steamed buns with pork belly, hoisin sauce, cucumber and scallions (spring onions). Once again they were delish, but we’d had the fried egg buns at Momofuku Noodle Bar a few days before and, it’s sad to say, these weren’t quite as impactful. Still, not a smear of sauce remained. 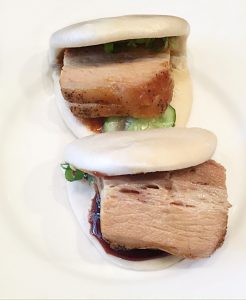 We then moved to the dish featured at the very top of this post. Even at an early stage of lunch we were told supplies of it were very low. These were fried duck dumplings with cauliflower and a spicy mayo. We’d had this dish on our previous visit, but this time the mayo was slathered all over the bowl (instead of being in a small dipping container on the side) and the addition of the cauliflower was inspired. Greedy Girl generally only eats cauliflower as a puree, hopefully accompanying some grilled scallops and some flecks of crispy bacon but this was fabulous. She kept sneaking the florets, smothered in the spicy mayo.

There was still more to come. We opted for an open-face breakfast sandwich. Chicken sausage, sunny side up fried eggs and tater tots (what we Aussies call potato gems) made a very appealing plate but just, perhaps, a little too stodgy to finish on. We often add potato gems to our weekend fry-ups at home, but instead of coating them in gravy, we sprinkle black truffle salt. 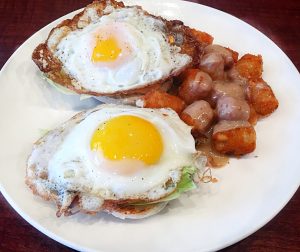 And we were done. In the three times we’ve been to Momofuku Ssam Bar, we’ve never plumped for the rotisserie duck (which is one of the things you can get a reservation for) and the restaurant also offers a lamb shoulder. Greedy Girl supposes she needs to leave something to try next time …