Exploring a new neighbourhood in New York City is exciting. We’d “dipped our toes” below Houston Street on the Lower East Side on previous visits because it had already started to get a foodie reputation. This year, we decided to base ourselves there and for lovers of food, great bars and good coffee, it was a huge bonus.

But when you’re travelling for a prolonged period, every meal can’t be full-on. For our first night on this trip we were looking for NYC fun bites. Our amazing friend Czarina Worldwide recommended a spot around the corner from our apartment for a snack – Stanton Social.

Even with the brightness of the early evening outside, the interior of the main restaurant here is dark and moody. While that makes for an atmospheric spot to sit, it doesn’t do much for Greedy Girl’s photographs. We ended up visiting twice – and the second time headed for the bar upstairs with has great skylights. Sorted.

While there is a host of larger dishes on the menu, Stanton Social has a great selection of plates to share and snack on. We probably ordered more than we initially intended but, c’est la vie.

Before we’d ordered, the wait staff brought us a complimentary amuse bouche – two small cups of a purple potato vichyssoise. Having had our fill of purple potato in Honolulu, we approached this gingerly but it was actually quite delicious. 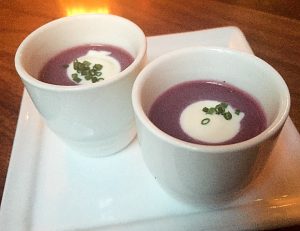 We chose a Founders IPA and a glass of rose – a Cabernet Franc/Merlot mix from Bedell winery on Long Island and awaited the rest of our food. First up from the dishes we ordered were two of the restaurant’s specialties – pierogies and French onion soup dumplings. 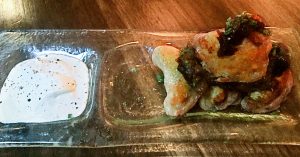 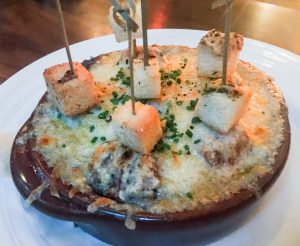 The potato and goat cheese pierogies were served with caramelised onions and a truffle creme fraiche. Greedy Girl (of course) enjoyed the truffle hit from the sauce although she’s not usually terribly fond of creme fraiche. It went well with the little parcels although there wasn’t a lot of cut through from the onions. Still, a pretty good start.

The dumplings were very unusual – indeed, we had no real idea of what to expect. The dish you see above actually has a number of round holes into which individual dumplings sit, topped with cheese and skewered with croutons. Very enjoyable but not a huge flavour hit – perhaps we ate them while they were too hot.

Next up we moved to a selection of sliders, taking the Kobe beef burger and Philly cheesesteak. The cheese for the latter item was actually a truffle and goat cheese fondue. They were served with some housemade potato crisps. Both were very enjoyable, fun bites. It was our first experience of the famed ‘cheesesteak’ and we were both glad it was on the smaller side because it’s a rich mouthful.

We opted for another savoury plate – what the restaurant called ‘old school meatballs’ served with basil and ricotta ‘manicotti’. Manicotti is said to be an “Italian American” pasta designed to be stuffed and baked. You can see it below the meatballs in the picture below. It was a very nice dish. The texture of the meatballs was particularly good. 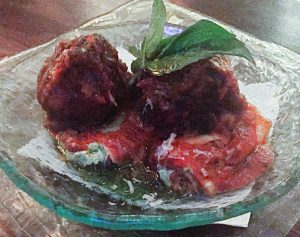 We didn’t intend to have dessert but got talked into another signature dish, the warm doughnuts with three types of dipping sauces. Apologies for the picture quality but it was very dark by this point. 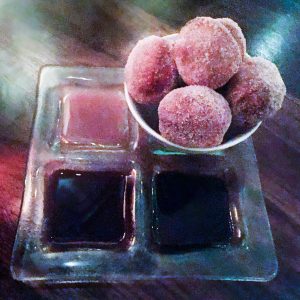 These came dusted with sugar. On the rare occasions Greedy Girl indulges in doughnuts at home, she prefers them without sugar. The three sauces were caramel (top left), raspberry (bottom left) and chocolate. The caramel sauce was probably the only one that we considered to be the right texture – a bit viscous and clinging to the doughnut. The raspberry sauce was very thin and the chocolate sauce looked dark and decadent but didn’t deliver a huge chocolate hit.

And for one evening, we were done. We paid our bill and headed back to the apartment to deal with jetlag as best we could.

On another evening, we headed upstairs to the bar so that gluttonous husband could avail himself of the oysters happy hour special that seems to be offered by virtually every restaurant on the Lower East Side and beyond – $1 per piece (pictured at the top of this post). The oysters were a mix of species from the east and west coasts of North America and were small and sweet – just the way gluttonous husband likes them.

Enjoying another IPA, he happily settled in while Greedy Girl, having already been on her margarita tour (see the blog Living in Margaritaville here), asked for a Cosmopolitan, just to mix things up. And a very pretty sight it was too … 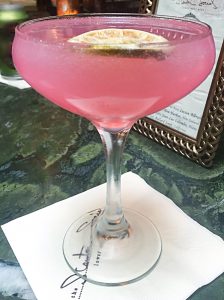 Stanton Social is by the same team as Beauty and Essex. We had very solid expectations for the latter after visiting here, but we found this to be far superior. In terms of NYC fun bites, it was a great place to be and very satisfying.