When Greedy Girl and gluttonous husband visit New York City, it’s hard to get them out of Manhattan, which isn’t necessarily something to be proud of. The other boroughs have a lot going for them, especially when it comes to eating and drinking.

We had the opportunity of catching up with Greedy Girl’s Twitter friend She’s a Poet, who suggested meeting at Franny’s in Brooklyn. It was, perhaps, an odd location. She’s a Poet works in midtown Manhattan and lives in Queens but apparently her choice of dinner venue and home are on the same Subway line. But most importantly, she wanted an excuse to visit Franny’s.

This is one of the city’s hottest pizza places – a step beyond the typical NYC pizza joint with red checked tablecloths, or laminate countertops. It’s in the Prospect Heights neighbourhood; many Brooklyn areas are now havens for foodies and coffee lovers and there’s also a thriving bar scene. Indeed, given we were early for our reservation, Greedy Girl and gluttonous husband stopped off at a local dive bar, Sharlene’s, which offered a ‘Chocolate egg creme’ – basically vodka with chocolate syrup. ‘Nuff said.

Open since 2010, Franny’s is all about sustainable sourcing of its food. As much as possible, they use local and seasonal produce – as such, some of the dishes available on the menu can vary but there are some classics. There’s a range of salumi and a good selection of appetisers as well as some pasta dishes and, of course, the pizza and calzone selection.

Greedy Girl and gluttonous husband rarely eat pizza so this was a treat. We opted to share a starter and two ‘pies’ – the clam with parsley, chilli and garlic you can see at the top of this post, and another tomato-based pizza.
First up were some arancini with pork ragu and caciocavallo – a Sicilian sheep’s milk cheese. These crispy morsels were very tasty – the tang from the cheese gave them a real lift. Unlike many other arancini Greedy Girl has tasted, they weren’t at all stodgy. A fine start. 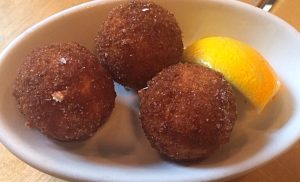 We then shared the pizzas. The white pizza with the clams was a revelation. Greedy Girl rarely enjoys seafood on pizza but the clams were amazingly fresh combined brilliantly with the other ingredients – no one flavour dominated. These are thin crust pizzas; while the edges were crispy, the rest of the slices we cut were a bit soft on the bottom. Greedy Girl has yet to perfect the technique of folding over the soft base on itself.

Next was the classic style – tomato, basil, olive and cheese. Gluttonous husband commented he enjoyed this one the most while Greedy Girl preferred the clams – a role reversal, given gluttonous husband usually opts for seafood. 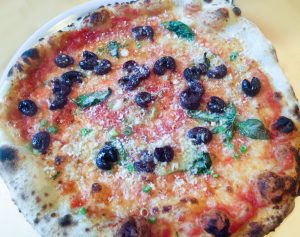 Downing the rest of our drinks, a Stoop Juice IPA from Third Rail Beer in NYC for gluttonous husband and a good Sicilian rosato for the girls, we decided against a dessert and went into the night to brave the Subway back to Manhattan and beyond.

This is a hugely popular local restaurant which apparently didn’t take reservations in its early days but does now. Everyone we spoke to in the major eateries in NYC (who asked us where else we’d eaten) all replied without hesitation that they “love Franny’s”. The approach to doing everything as sustainably as possible obviously resonates with the locals and there’s certainly no sacrifice when it comes to the food.