Having never really made Bali a travel priority, everywhere Greedy Girl and gluttonous husband have ventured here has been with minimal expectation. Such was the case for our ‘coupon deal’ at La Laguna.

This is a beach club at Canggu – the next district on (or beach along) from Seminyak. It’s a quirky spot, with Balinese pavilions abutting the sand (and the surf), dressed up with whimsical furnishings. Classified as an ‘open air’ venue, smoking is permitted throughout. While that’s fine for those who indulge, it’s a bit of a shock to the system for those who don’t, especially when it comes to sitting down and trying to enjoy one’s lunch.

Even though it was a Friday, the venue wasn’t busy. Thankfully Greedy Girl was able to spy a table that didn’t appear to be downwind of anyone puffing away. And so we sat, perusing the menu, looking out on the sand, towards the breakers pummeling the shore. It has to be said, this area of coastline isn’t exactly picture-perfect. Having been in Honolulu just a few months earlier and dazzled by the white sands and azure waters off Waikiki, this is – it has to be said – a little underwhelming.

But we weren’t there to stroll along the beach. We’d been told the setting was quite nice but not to expect much from the food. Greedy Girl begs to differ. The food was much better than the setting. There were six set menus to choose from. Three had a starter and a main, while three gave options for a main and a dessert. Gluttonous husband chose starter and main, while Greedy Girl took the main course followed by dessert. As we share pretty much every dish, we ended up with a three-course meal.

Initially we weren’t planning on having anything to drink, but a shady spot, a hot day and the availability of frozen margaritas turned that notion on its head. Greedy Girl’s hand went up like a shot and, shortly thereafter, this is what arrived … 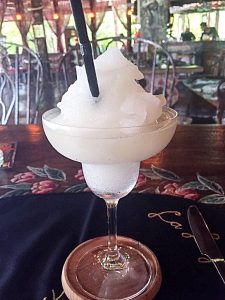 It looked the goods and the flavour was fine. The one thing missing was a salt rim on the glass. Gluttonous husband immediately requested a salt shaker and a side plate and we remedied that as best we could.

And so to the food – we started with a tuna tataki to share. This was a tasty fillet of tuna coated in black sesame seeds and quickly seared in a hot pan. It was served with balls of mango, sitting atop a leaf salad and a dish of a soy-based dressing on the side. Perfectly pleasant, it quickly went down the hatch. 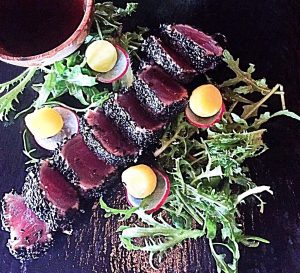 Next up, gluttonous husband had the salad pictured at the top of this post, which sounded a little like a Caesar salad, but obviously didn’t look the part. It was romaine leaves, shaved Parmesan, bacon, chicken breast and ‘cumin gouda’ and was generally edible, if a little on the bland side.

Greedy Girl took the lamb ‘Moroccan’ sausages, served with a very yummy harissa sauce, a bulgur salad and a fair amount of raw red onion and rice. It was actually a very tasty dish. These thin sausages were perfectly cooked, moist and flavourful and the hit from the spicy dressing was very enjoyable. A triumph there. 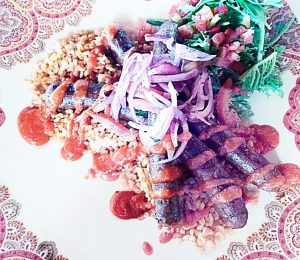 Finally, we opted for one of the few sweets we’ve eaten in Bali – a dark chocolate brownie with vanilla ice-cream. It was also topped with some flaked almonds which gave a lovely additional flavour and texture. The brownie was dense, soft and had a great depth of chocolatey flavour. The ice cream? Greedy Girl didn’t indulge but gluttonous husband said it was unremarkable. His comment was that it tasted as though it had been re-frozen too many times. Nuff said. 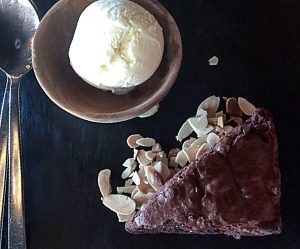 And we were done. The restaurant had become a bit more crowded but we’d managed to avoid being smoked out. We paid our bill and looked to head for the exit, as the staff continued their preparations for what looked to be a big party that night.

We walked back to the entrance and asked the host to get us a taxi. Apparently, in this particular area of Bali, the transport is more strictly controlled. The regular taxi services weren’t permitted to come and pick us up – to get back to our hotel, we needed to pay for a private car service – at around three times the cost of the taxi ride we were able to use to get there. Still, the cost for the more expensive trip worked out to be only around A$10. No big deal.

While neither of us were particularly interested in spending time on the beach, the standard of food here was a welcome surprise, especially given it was part of a voucher deal. You could do a lot worse here.