Here in the southern hemisphere, we’re heading for warmer temperatures. Having said that, there are still plenty of days when a tasty bowl of steaming soup does wonders for the soul. Our soup repertoire expands every winter and we’ll be blogging the best here. First up, our leek and potato soup recipe.

Gluttonous husband incorporates a few different techniques here that he’s learned. Inspired by Jamie Oliver’s turkey and leek pie, he prepares the leeks for this soup in a similar manner which gives additional depth.

Our preference is to use vegetable stock which gives it a lighter flavour but you can use chicken stock if you prefer, or have it to hand. 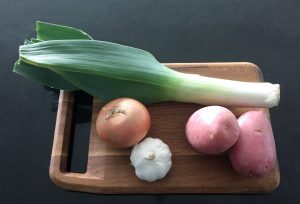 Put butter in a heavy-based pan or casserole dish (we use a Le Creuset cast-iron pot).

While the butter is melting, dice the onion and throw on top. Add a little salt so the onions don’t brown.

As they sweat, prepare the leeks, put them into a colander and wash thoroughly under running water. Don’t dry them, just leave them to drain in the colander.

Once onions are translucent, add the leeks, stir to combine. Keep the heat on low, put the lid on and leave for 30 minutes, stirring every 10 to ensure the leeks don’t catch on the bottom of the pan.

We use the green part of the leek as well as the white, but if you want to have a lighter-coloured soup, which is more classic, just use the white.

At the end of 30 minutes, the leeks will have cooked down and there should be some moisture in the bottom of the pot. That’s when you add the potatoes, stir them around to coat in the mixture, add the stock, a little freshly ground black pepper, and bring slowly to the boil.

Simmer until the potatoes are tender then take the pot off the heat and leave to cool. You can then put it in your blender (or use a stick blender in the pot) to puree the mix.

We serve this with a drizzle of truffle oil and either home-made croutons or olive and rosemary focaccia. Enjoy!