Our first night in this seat of power, we caught up with our foodie friend and local resident Lisa Marie for drinks and snacks. She suggested we try one of the waterfront eateries, down on the Potomac River and we headed for Nick’s Riverside Grill.

In the Georgetown area, Nick’s is part of a riverfront collection of restaurants with an emphasis on al fresco bars and tables. Given the winters are rather chilly here, good weather means everyone takes the opportunity to get outdoors.

Even in the early evening, the bars were all packed and we were pleased to be shown to a table down the far end, as close to the river as you can get. Sadly, for most of the evening, our view was obscured by tourist ferries; from time to time they moved on, affording us a relatively peaceful outlook – well, as peaceful as you can get with a constant stream of planes coming into land at the nearby Ronald Reagan airport, plus the occasional buzzing by a military helicopter.

Still, it was very pleasant to be outside and we delighted in choosing a few plates to share. Something cool to drink was in order and the girls sipped a very acceptable Gabbiano Pinot Grigio and gluttonous husband took a Flying Dog ‘Easy’ IPA, from a craft brewery in nearby Maryland.

The food here isn’t flashy but it’s certainly very edible. The menu has a huge amount of choice (which is fairly typical of these types of eateries in the US) and so it’s quite easy to pick out a few snacks, which are executed reasonably well.

Given we arrived ahead of our friend, we needed something to take the edge off our appetite. It had been a fairly long commute on Amtrak down from New York City and we were somewhat peckish, so first up we took what the restaurant termed ‘Old Bay’ French fries. Apparently Old Bay is a herb and spice seasoning that originated in the Maryland area. It was perfectly acceptable even though Greedy Girl likes to steer away from the various additives on fries throughout the US – they get a bit heavy for her after a while. 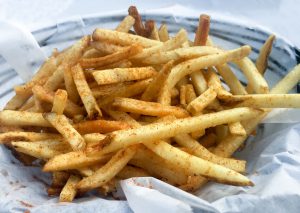 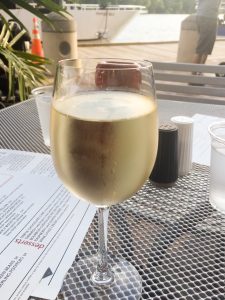 A generous pouring of pinot grigio. Pity about those boats blocking our view

And so the evening unfolded – we ordered glasses, we ordered plates. Next up was edamame. The soy beans had been steamed (according to the menu) and dressed with sea salt, sesame seeds and sweet chilli. Looking at the dish, we could see some, ahem, caramelisation on some of the pods indicating they’d caught on the bottom of a saucepan somewhere. These definitely needed more salt, but they were OK to snack on over the course of our stay. 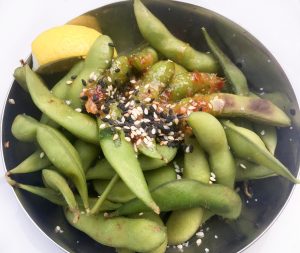 We also took crispy calamari, served simply with a creamy tartare and a lemon wedge. Again, perfectly acceptable, if not a rave. 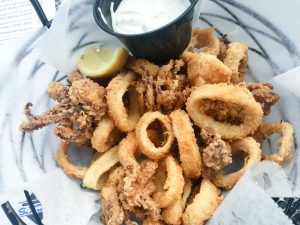 We needed some meat, opting for the lightest dish we could find, a charcuterie board. This had a mix of capicola, smoked chorizo and pepper salami with a small dish of beer mustard, plus a hard-boiled egg, some pearl onions, cornichons and plain crackers. Perfect for sharing, entirely edible. 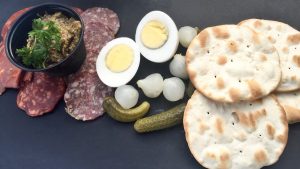 By this stage, the conversation and the wine were flowing freely and we decided to finish with something that was likely to soak up some of the booze – nachos (pictured at the top of this post). Greedy Girl can’t remember the last time she had nachos, finding the cheesy mix just too heavy but, between three still hungry people, this went down a treat.

And we were done. Lisa Marie took us into the night to some of her other favourite spots in Georgetown and we went off exploring.

Nick’s Riverside Grill looks to be a bit of a waterfront institution here. For a decent feed and a good spot to while away a balmy evening, you could do a lot worse.