Seeking out Italian comfort food, Greedy Girl met her friends Bev the Cook and The Bibliophile for what they thought would be a quiet little dinner in Melbourne.

Well – that was accurate, up to a point. The dining room was deserted but, especially given the festive season is in full swing, the bar was jam packed. Oddly, we were seated directly across from the bar – a series of tables around the corner were empty. Indeed, at this relatively early hour of the evening, we were the only diners. Greedy Girl was a tad nervous; what were we about to receive?

But she needn’t have worried. The Trust is in one of Melbourne’s fast diminishing heritage buildings, opposite a gigantic construction site that will, eventually, be home to a rather extraordinary-looking skyscraper. The interior is, as you’d expect, somewhat old-fashioned. Greedy Girl pulled up one of the odd white-framed dining chairs upholstered with deep red velour and very shortly after a rather nice Taltarni cabernet merlot was produced.

According to various reviews Greedy Girl has seen, the restaurant has held various accolades over the years – including hats in the Good Food Guide, although her research has yet to confirm this. Still, the menu promises some Italian classics and the Trust’s website (when it’s operational) featured attractive-looking dishes.

After a while, the noise from the bar ceased to annoy us and we settled in. We opted to share a range of starters, dominated by seafood. First to come were marinated olives, which were still quite hot when they reached the table. Greedy Girl let them cool for a few minutes; big, juicy and flavourful Sicilian olives didn’t have much oomph from the marinade but were very pleasant. 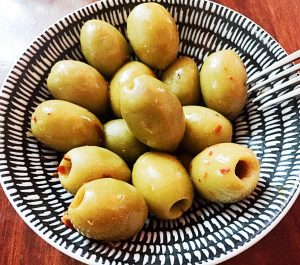 We also opted for some chickpea ‘chips’ served on a slick of capsicum aioli. These were really very good, with a nice crunchy coating. There wasn’t enough of the aioli to go around though. 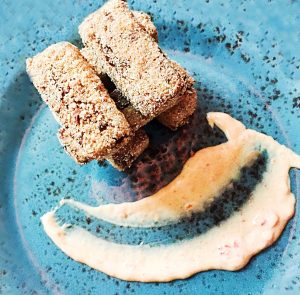 The Bibliophile loves whitebait and this is a real classic, served with a celery salt aioli. 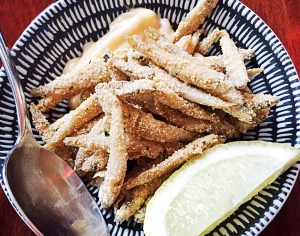 We also took the tuna tartare, pictured at the top of this post. It was a very pleasing plate – pretty to behold, with a great mix of colours and flavours. The tuna was dressed with a little sesame oil, black sesame seeds and jalapeño chilli. It was nice to see it offered in small chunks rather than minced up.

Our final starter was a fritto misto of prawns and calamari. Greedy Girl thought the calamari was unremarkable but the prawns were cooked perfectly – just the right amount of resistance in the mouth. 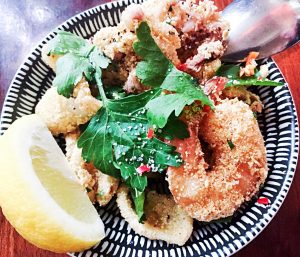 A decision needed to be made – should we order a couple of pastas and share, or one each. Still being peckish, we had our own plates. The Bibliophile ordered a special linguini Amatriciana. 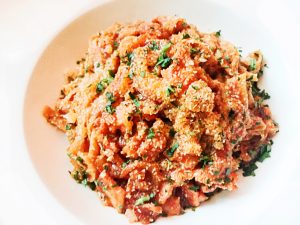 Bev the Cook opted for the Pappardelle del’Orto, with asparagus, rocket and lemon. 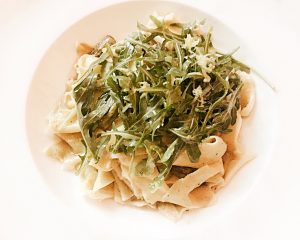 Pasta with rocket, asparagus and lemon

Greedy Girl decided to try the spaghetti with meatballs. The tomato sauce with this was good – it had a nice tang. The meatballs though were a bit dry and in need of seasoning. 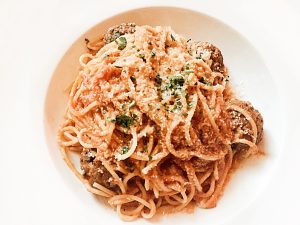 And we were done. It was certainly a very acceptable meal and quite refreshing to be somewhere without any great pretensions. We also had good service, although it had to be said there were only another couple of tables occupied after us.

For classic Italian comfort food in Melbourne, it’s not a bad option.