Travelling in Asia’s major cities, one of the traditions Greedy Girl and gluttonous husband swear by is the champagne brunch.

In Singapore, most of the major hotels do a brunch on Sundays, with a variety of alcohol options available. We headed for the soaring Equinox restaurant at Swissotel the Stamford, where we were promised a continuous pour of 2006 vintage Moët et Chandon champagne for S$168++ (service and tax).

Equinox is on the 70th floor of the hotel and overlooks Marina Bay Sands, as well as the extraordinary Gardens by the Bay. Greedy Girl, not the greatest fan of heights was initially a little unnerved to be shown to a table right next to the very large windows. Where’s that champagne??

And there came the first of the unwelcome surprises. The champagne in question was a rosé – no mention of that on the website, or on the exhaustive email sent back confirming our booking.

Greedy Girl isn’t fond of it – a glass, maybe two at a stretch, but an unlimited pour? Thanks, but no thanks. We communicated to the waiter that we didn’t want to drink rosé. His response – there was an alternative but it wasn’t vintage. We shrugged; having already settled in our seats, we decided to stay. Equinox also requires a credit card guarantee on booking and we didn’t want to have to go through the hoops.

So, having toasted each other with NV Moët, we headed off to the various stations to see what was on offer. Unlike other champagne brunch spreads we’ve enjoyed, in Hong Kong and Bangkok in particular, the spread was quite modest. Doing the most business was the seafood station, with half lobsters, crab claws, oysters, prawns and a selection of sushi and sashimi. 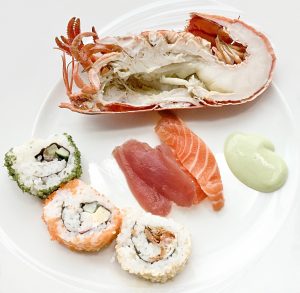 Greedy Girl opted for the wasabi mayonnaise (there was a big selection of dressings) plus her standard soy and wasabi mix in a separate saucer. The lobster was pretty disappointing, it had to be said. We had to yank the meat out of the tail and it was far from succulent but the sashimi (Greedy Girl took her favourite tuna and salmon) was excellent and the sushi rolls were also very good.

Meanwhile, gluttonous husband was diving into the crab claws. These were huge and utterly delicious and he went back a couple of times to indulge.

There’s a small menu and you can choose to order as many or as few dishes as you like to be cooked to order. We started with the dish at the top of this post, grilled scallops and a Baccala (salt cod) croquette. 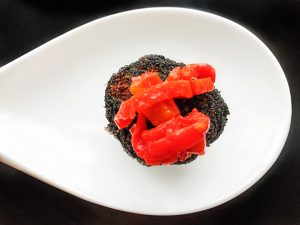 Our waiter said the dishes were quite small (the a la carte menu was divided into small plates and larger options) so he suggested one each. All good. The scallops were delectable. Perfectly cooked, they were advertised as being accompanied by chervil and cumin. Not sure we got many of those flavours but they were very enjoyable.

The croquette, as you can see from the picture (above) was rather caramelised. Greedy Girl loves a bit of charred flavour but these were a bit too far gone for her. Topped with piquillo peppers and saffron, it tasted OK but just not as refined as we’d expect.

To punctuate the champagne, Greedy Girl decided to get gluttonous husband a treat. Our brunch included a selection of wines and cocktails. Spying a Bloody Mary on the cocktail list, she walked up to the little bar and ordered one. The bartender said he would bring it to our table.

And so we continued selecting food, sipping our champagne and waited, and waited, and then waited some more for the cocktail to appear. Eventually Greedy Girl got up and walked over to the bar. The Bloody Mary was sitting on the counter, ice slowly melting, looking lost and forlorn. The bartender was nowhere to be seen, nor any wait staff but – like magic – the moment Greedy Girl picked up the glass, they came running from everywhere. Poor form. But anyhoo …

Gluttonous husband ordered the grilled halibut with vegetables, lentil ragout and confit tomato from the ‘big plates’ section of the menu. Times like this, one needs to be able to show some kind of scale. This was a small piece of fish atop the other elements. The fish was quite nice but gluttonous husband said he didn’t think the other flavours went with it. 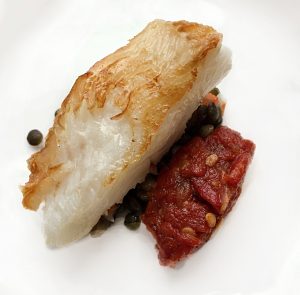 The champagne brunch opens at 12 noon and goes through until 3pm, with final requests for cocktails by 2.45pm. As we sat back and took in the view, a few rain storms passed by, and we were serenaded by a reasonable singer and guitarist. There are a lot of stairs in this restaurant; the ceilings are extremely high and a number of mezzanine areas have been created. Luckily for us, we were in a narrow area reserved for tables of two – up on the other floors there were big tables and quite a number of kids. It was nice to have a bit of distance from the big groups.

We ordered some more dishes. And waited, and waited, and waited some more. As the brunch progressed, finding staff became more tricky. We needed to get someone’s attention to find out where our food was. Gluttonous husband eyed him moving over to one of the computer terminals; it was pretty obvious our dishes hadn’t been ordered.

But some plates eventually arrived – this was pulled pork toast with dill pickles and sweet mustard. It was one of the best dishes of the day, although the texture was very unexpected; it was almost crisp. Still, it was very good. 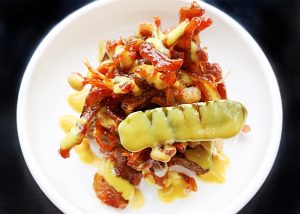 Gluttonous husband decided to have another look around the stations; there was a chef carving roast beef and he had a bain marie full of extraordinarily fluffy Yorkshire puddings. He brought back a plate for Greedy Girl. 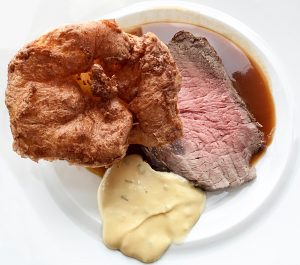 This was entirely edible. The beef, as you can see from the picture, was still a bit pink and the jus was acceptable, if a little bland. The highlight though was an incredibly good béarnaise sauce which clearly had been made from an excellent vinegar and shallot reduction with plenty of tarragon. Delish – and the Yorkshire puddings mopped up every last skerrick.

We asked for some more plates from the menu – a corn fritter with smoked peppers, preserved lemon and basil oil from the small plates, plus roasted field mushroom with wild rice, cauliflower and whole grain mustard. We asked for two orders of each dish.

The corn fritters were not what we expected but they were OK to eat, if not a rave. They were covered in rocket leaves  – a surprise given the menu didn’t say anything about that. 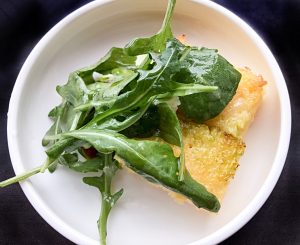 The mushroom dish was very strange. We got one small wedge of mushroom and the rest of the dish was dominated by the rice, plus it was studded with hazelnuts which didn’t work. Greedy Girl took the piece of mushroom off the top, fully expecting there would be more folded within the rice mixture, but there wasn’t. Very odd. 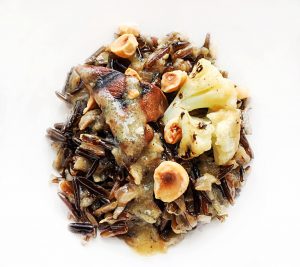 We were into our final hour. Greedy Girl decided to go check out the desserts and found them a bit disappointing.  A chocolate fiend, there was a sign next to an empty platter that a chocolate mousse cake was available. She asked the chef standing by if there was more. He nodded and went off but the inference was it wouldn’t be replaced unless someone specifically requested it. Still, it was a nice chocolate hit.

Gluttonous husband had moved to the cheese selection by this stage and there were some reasonable choices there. We continued to sip, but all of a sudden, the wine waiter came up to refill our glasses with what looked like a different bottle. It was a 2008 vintage Moët which he proceeded to pour into the same, not empty glass that Greedy Girl had been sipping from.

Greedy Girl was lost for words. Not only had we paid for a lunch with Vintage champagne and been told at the outset that only rosé was available but now, with only around 30 minutes remaining, we were presented with this: 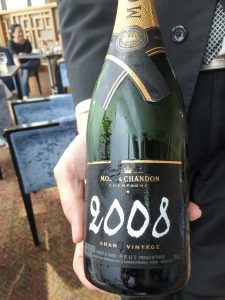 Sigh. By this stage we just had to, literally, go with the flow. The wait staff were very nice to chat to, but the actual service was pretty terrible. The arrival of the vintage so late in the day had us shaking our heads, especially when they didn’t have any protocol around ensuring they didn’t mix champagnes in any one glass. It’s a basic failing.

Still, with half an hour of Vintage champagne, we decided we needed to have something else to snack on. Gluttonous husband came back with some crusty bread, studded with pumpkin seeds and slices of foie gras. Now, this is a decadent little nibble to pair with champagne. 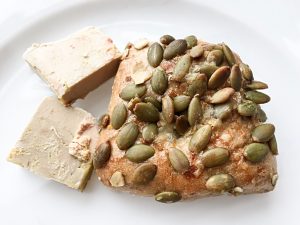 Our Sunday brunch was in the lead-up to Valentine’s Day, so we were treated to a little box of chocolates as we prepared to depart. 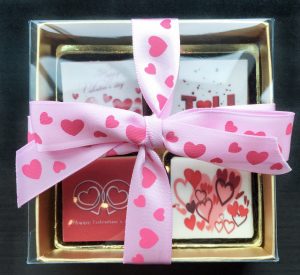 Love is in the air …

And we headed off, but Greedy Girl was still seething over having paid for a ‘Vintage’ champagne brunch and only getting 30 minutes of a vintage pour. She wrote the restaurant an email pointing out the deficiencies of the experience. Over a week later, they responded, saying they would rebate 20 percent of our bill to our credit card. That took just over a week to process but they were as good as their word. A nice gesture.

But of all the champagne brunches we’ve done to date, this was the most expensive and the most disappointing.