Down in Singapore’s financial district there are some very impressive-looking buildings. One side of the Singapore river is dominated by the iconic Marina Bay Sands and the other is densely populated with towering glass, concrete and steel edifices.

And so we found ourselves on the 43rd floor of the Ocean Financial Centre, a building with an extraordinary view of Marina Bay Sands and the legions of tankers and ships lined up to dock at the port. We were meeting Greedy Girl’s old friend The Travelling Triathlete, for a quick lunch at Zafferano.

In Singapore’s amazing food scene, restaurants make a lot of effort with their decor. Zafferano is no exception. One needs to be buzzed into the lift lobby from the ground floor reception desk and the elevator speeds you up to a dark and moody restaurant entrance. Soon, though, you’re bathed in light, surrounded by floor-to-ceiling windows and what looks like legions of tables. It’s clear, both from the location and the restaurant style, that this is often frequented by business types. There is statement lighting, metres of white starched linen and, of course, the exceptional view.

There are two set lunches on offer. We opted to take just two courses each and, having made our selections, settled in for a chat.

The chef here is Marco Guccio, originally from the south of Italy, who cut his teeth in restaurants in Milan and London before heading to Singapore. The cuisine is described as ‘contemporary’ Italian – mixing the chef’s southern heritage with northern Italian influences.

The business lunch menu has only three options to choose from for starters and main courses. Greedy Girl and The Travelling Triathlete both opted to start with wagyu beef carpaccio, which was drizzled with olive oil, topped with rocket and shavings of Castelmagno cheese (from the Piedmont region). 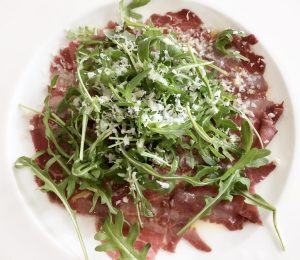 The meat was very soft and pulled apart easily. There was certainly a profusion of rocket and the cheese provided a nice salty tang. Quite a nice starter.

Gluttonous husband took the salad starter. This was pretty much a chicken Caesar, with avocado and a mustard dressing. It was presented attractively and edible, if not a rave. 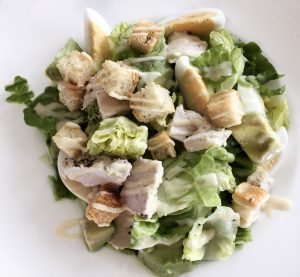 And so to mains. Both boys took the Chilean seabass (pictured at the top of this post). The Travelling Triathlete, who works in strategic comms in his day job, described the fish as having undergone a ‘rebrand’. It’s also known as Patagonian Toothfish and, let’s face it, has a face only a mother could love. Apparently, our learned friend recounted, some chef (most likely in the US) decided customers weren’t fond of ordering ‘toothfish’ and gave it the South American moniker. It’s also known by Italians as Branzino. But Greedy Girl digresses …

It’s a moist, meaty fish with quite a distinctive flavour but not outrageously strong. It was paired with tomatoes, capers, olives and orange zest. Gluttonous husband felt the sauce was too strong and overwhelmed the fish; he also didn’t get any flavour from the orange. Still, the fish was cooked well.

Greedy Girl, having had a surfeit of Asian dishes decided to plump for one of her all-time favourite comfort foods – penne bolognese. Essentially this was a beef ragu with Parmesan cheese grated over the top. 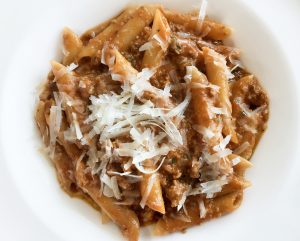 Again, presented nicely, the dish had a great aroma. The texture, however, was a bit too soft for Greedy Girl’s liking. After a while it just tasted a little mushy.

With The Travelling Triathlete needing to get back to the office, we moved straight to coffee. While the boys each had an espresso, Greedy Girl decided to test out the barista by asking for a piccolo latte. He was behind her, but gluttonous husband watched him prepare the coffee. Oddly he placed a small glass of steamed milk on a saucer and then dropped a shot of espresso into it. And this is how it came to the table. 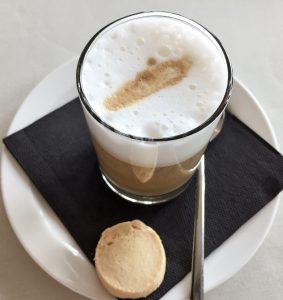 Even with a fair amount of milk foam sitting on top, this was a pretty weak result. Given we were in an Italian restaurant we had hoped for a decent coffee. This wasn’t one to write home about.

And we were done. Off we went into the blinding afternoon sun.

Zafferano is a great-looking restaurant with acceptable food but nothing we had was a particular rave. Greedy Girl admits she’s yet to have Italian food in Singapore that she’s really relished. The hunt will continue.