This is the first in a series of Sydney highlights from a recently-returned local who’s spent the past few years working in London. I’ll share old and new haunts that are uniquely Sydney – some touristy, some not.

As I walk towards the pool, past the kitsch square arch that spans the road and welcomes me to Luna Park, I draw back on the clean harbour air and feel the chill pills taking effect. Maybe it’s the visual distractions in front of me – the harbour, a deep, deep blue on yet another strikingly clear Sydney day – or perhaps it’s the city skyline that frames it. Maybe it’s looking up from below at the imposing structure of the Sydney Harbour Bridge.

Upon checking in to North Sydney Olympic pool, you can see spectacular views of the Emerald City. Turn left and you’re at the top of the grandstand. At nine o’clock you have the Harbour Bridge and the city beyond. The pool faces west and directly opposite you can see the Millers Point warehouses and beyond that, the incredibly ugly new Barangaroo Towers.

Track right and you see Anzac Bridge, then Balmain, and back on this side of the harbour it’s McMahons Point. The Luna Park façade with its Chrysler building miniatures, fake eyelashes and Ferris wheel are visible right next to the pool. 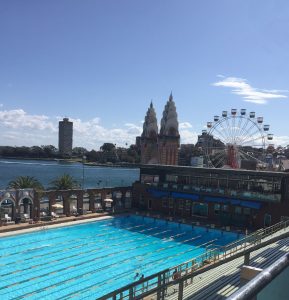 As well as the views, there’s history and aesthetics to match. Opened in 1936, the pool and its related buildings are classic art deco, featuring geometric design throughout and finished off with fine detailing such as a centrepiece colonnade, adorned with squatting frogs, seagulls, seashells, and jumping dolphins.

The colours used around the pool – the baby blue, salmon pink, and soft corals are very similar to those on the Luna Park façade and the arch on Alfred Street; the pool was designed to complement the Bridge and Luna Park. You can explore the pool’s history in the cool corridor on the ground floor. Highlights include hosting the 1938 Empire Games, diving events, and serving as a major swimming venue from the 1950s to 1970s. Several world records were set in the pool over the years by Australian swimming greats such as John and Ilsa Konrads and Shane Gould.

Where to sit? You have quite a few choices. You can stay in the stands where there is some shade depending on time you’re there and where you get the best views of the house (and free wifi if you sit close enough to the neighbouring restaurant Aqua). Or you can sit poolside next to the harbour, in the garden out the back or on the sun deck with the tourists/backpackers on banana lounges complete with synthetic grass and palms in the background. It’s there I find my favourite spot under an umbrella. I shuffle tables and chairs to suit and settle in with my novel. After that I’ll do an hour of work. 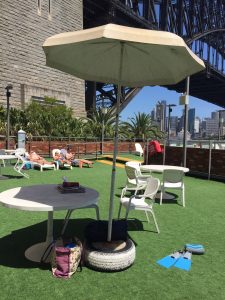 Most swimmers do freestyle gracefully up and down the pool; human metronomes moving in sync. North Sydney Olympic Pool is a real lap pool and don’t be surprised if you’re told off for swimming too slow, swimming in the wrong direction or the wrong stroke. Just make sure you pick the correct lane. The pool is filled with filtered harbour water, provides great buoyancy and is quite clean. Actually the whole complex is generally quite clean. Do laps here and you won’t want to do them elsewhere again.

As the summer sun turns it on, it’s time for me to take a dip; cleanse the mind and body. Diving in, the cool salty water calms my head. I stretch my goggles over my eyes, ease on my fins, grab my pull buoy and freestyle kick up and down the pool. When I have enough energy, I change to freestyle.

Today random thoughts wander in and out of my mind, but on other days, I’ll let the challenge of the day wash over me. I wonder how many frustrations; how much anger or celebration has been thrashed out in the pool. I tell myself to follow the thin blue line and everything will be ok – and it always is.

Post swim, I feel like some tea and head to the canteen downstairs run by the Ripples restaurant group. It’s pretty average, but does the job. They also serve snacks, fish and chips, rolls, ice creams and lollies.

Recently I was introduced to the offbeat Side Part Café at the entrance to a hairdresser nearby. The food is quite tasty; the beverages are excellent – it’s more expensive but you get what you pay for with five-star service from the boss – and I make a mental note to buy my cuppa before I enter the pool next time.

An hour later with rising heat and humidity, I see blackish clouds gathering in the west. Another hour later, lightning cracks around the harbour, the temperature drops eight degrees in as many minutes and the wind changes direction – the southerly is in full force. People take out their iPhones and snap pictures from the stands.

This is a spectacular show that I never tire of watching but decide for my own safety I should move to shelter downstairs. The gods of thunder start to party hard, pounding their drum rolls, the kiddies scream and run under cover as the rain belts down. The pool manager comes out, sniffs around with his lifeguards and finally orders everyone out of the water. I’m sure the Scandinavian hygge writers would approve of my pool!

The storm passes and I reflect – over the years I’ve been coming here, the winter plastic bubble has disappeared, a 25-metre indoor pool and small gym have been built, a canteen and two coffee shops and two restaurants added. But now, things are really starting to show their age and wear.

The pool lining is lifting off and being held down on each side by weights, the steel rails in the stands are rusting through, the paint on the wooden planks in the stands is peeling off, a corner of the female change room ceiling has collapsed…the list goes on and I wonder about occupational health and safety issues.

North Sydney Council is not silly and recognises the pool “has come to the end of its life”. I’ve discovered it will be closed for about two years for renovations (although the start of work could still be another 18 months from now) and I worry about the new pool – the character, the aesthetics, will it be filtered harbour water – and selfishly, where I can possibly swim while it closes.

The council’s still looking at a number of options. Will there be another “wonder pool”? I’m an optimist and I say to myself it will be better than before – art deco mixed with 21st century flair. But for the time being, I’m savouring the pool as it is.