The last time we were in Shanghai was 2010 – during the World Expo. Every subway station had a desk with locals eager to assist clueless westerners trying to make their way around the city and we were among them, trying to work out where to go to get a coffee fix.

Fast forward seven years and we tried a return visit with the hope of being able to enjoy some reasonable coffee. Previously we’d spent considerable time on the train and a bit of a hike to get to an expat coffee haunt. This time we were hoping coffee in Shanghai had progressed a bit.

And, happily, it had.

Asking locals about where to get good coffee is fraught with danger. They’re just as likely to point you in the direction of Starbucks. We resorted to our usual search engines (big kudos to installing a VPN before we arrived in China) and the most promising option seemed to be called ‘Cafe del Volcan’ in Yongkang Street, not far from South Shaanxi metro station and the IAPM shopping mall and just around the corner from Xiangyang Street. While this means nothing to people who aren’t locals, trust me, it’s very easy to navigate from the subway.

We tried the coffee here a few times during our stay and found it consistently very good. It’s a hole-in-the-wall cafe with a roasting machine, a menu in English (no Chinese characters in evidence) and one passionate barista.

On our first visit, the cafe was full (that didn’t take much, there were only a half a dozen seats inside) of Europeans, but subsequently there seemed to be a good mix of expats and locals alike. We ordered a double espresso and a ‘Gibraltar’.

We’d been first alerted to the term ‘Gibraltar’ during our last visit the the US (see the coffee blog here) where it seemed the way to describe what Australians would know as a ‘piccolo’ caffe latte. The beans roasted here came from a variety of sources – south and central America, Ethiopia and Indonesia in the main.

The coffee was expertly prepared, full of oomph, and very enjoyable. Clearly the barista here knew what he was about and he had enough English to be able to give us exactly what we were after. Delish. 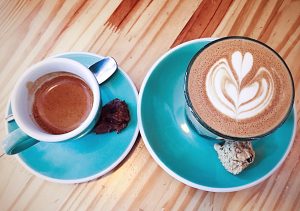 The next day we scurried back to the area hoping to sit down and have another delightful brew. It was a Saturday and obviously too early. Even though our web search had Cafe del Volcan opening at 8am, it didn’t open until 10. We wandered down Yongkang Street, looking for other options and happened upon Bagel Bar.

This had a distinct advantage – it was open. Another tiny cafe, we took note of a few Europeans sitting in the window seats and wandered in, deciding to order two double espressos and a side of warm milk. That was a little tricky to communicate initially, but we got there in the end.

The barista took a lot of care with the coffee, but the result was a little weak. Our first batch of milk in the little jug was cold but that was soon fixed. It was OK and, for the first coffee of the day, quite drinkable. 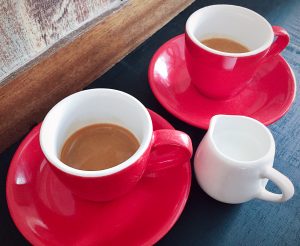 This is another groovy-looking little place that seems to be patronised by a number of locals. Again, the coffee menu (as you can see from the picture below) is in English. 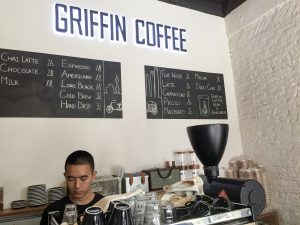 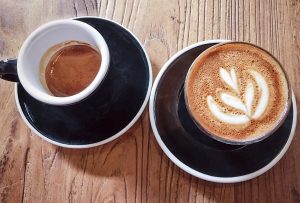 The coffee here wasn’t quite as robust as at Cafe del Volcan but still quite enjoyable. Again, a great degree of care was taken with its preparation.

We were heading back to the metro station and decided to try one more coffee, this time in Xiangyang South Road, just across from the shopping centre, at Kaffeine. This looked a little more commercial than the other outlets but had a very impressive machine front and centre. We pulled up some high stools near the entrance and ordered a piccolo and a double espresso.

What you see at the top of this post is what they termed a ‘piccolo’. Greedy Girl drinks piccolo (or gibraltar, or whatever local term is applicable) because she likes the full coffee hit, with much less milk than a caffe latte.

Given this was the same cost as the caffe latte, it was essentially the same amount you’d get – just split over two cups (with two very nice displays of latte art). We said we only ordered one ‘piccolo’ but the barista was insistent that this was correct. Okey dokey. Greedy Girl had her fill of coffee. 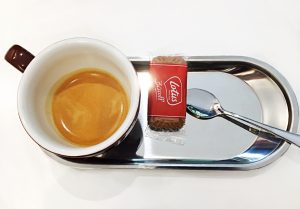 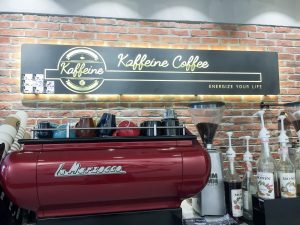 Gluttonous husband’s double espresso was presented in a large cup and paired with a traditional Italian coffee biscuit. After the effort at Griffin Coffee it was a bit mild but still quite drinkable.

There were plenty of locals enjoying coffee as well as expats, so it seems coffee is on the rise in China. Be aware though it can be a bit expensive. At Cafe del Volcan it was around A$6 each but gluttonous husband was more than happy to shell out for it, saying he’d be happy to get that quality anywhere in the world. At the other venues it was roughly around A$4 per cup, so usual prices.