Having a strong concept is a good way of differentiating a restaurant in a crowded market. We headed to Pure South Melbourne, in the Southgate shopping complex on the south side of the Yarra River, to experience the best of Tasmanian produce – meats, seafood, cheese, wine.

The restaurant is in an enviable location, on the western corner of the building. The more upscale dining room is on the first floor, and a casual eatery at ground level. The view is of the river and the city in the background and a very pleasant outlook.

Pure South has occupied the ground floor for a number of years but was relaunched early in 2017 to take over the next level. Executive chef David Hall has developed relationships with a number of Tasmanian producers, small and large, and those ingredients form the backbone of his menu. The suppliers have a commitment to sustainable and ethical production.

Pure South offers a reasonably small a la carte menu plus the option of having a tasting menu. Our waiter suggested we should take a number of starters to share (we were a group of five) but we opted to choose our own dishes as there were a few dietary preferences around the table.

Greedy Girl’s long time friend Pucci Girl started the Tasmanian theme, ordering a bottle of Piper’s Brook sparkling from northern Tasmania (not far from the town of Launceston), while we chatted and perused the menu, which read very well.

All bar The Francophile, who was saving herself for dessert, took a starter. Her beloved, The Runner, tucked into half a dozen oysters natural from St Helens while the rest of us tried some rather more intricate dishes.

Pucci Girl opted for an heirloom tomato salad – a brave move on a cold Melbourne night. It was served with goats’ curd, eggplant and watermelon and made a pretty dish. 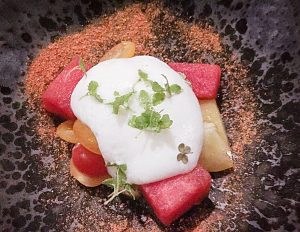 Greedy Girl was given a taste and while she couldn’t discern any eggplant, the chill from the watermelon was a bit of a shock to the system.

Gluttonous husband took cured and smoked line caught-kingfish. This was served with dashi, meyer lemon, wakame and a ‘Scotch’ quail egg. Again an attractive plate and the kingfish was delicious. The addition of the quail egg though seemed a bit odd. 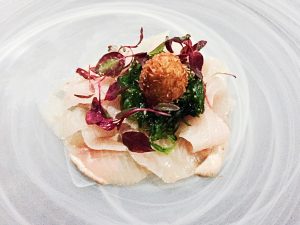 Greedy Girl had one of her favourite dishes – beef tartare. This was combined with fig and horseradish. The beef was grass fed from King Island and while its texture was very soft, the flavour was overwhelmed by the other elements. The sweetness from the figs though was a nice touch. 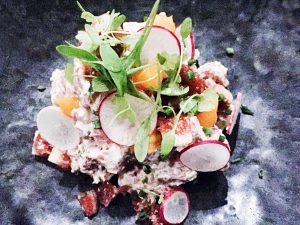 And so to mains. Both The Runner and The Francophile took a fillet steak, served with polenta, leek and mustard. The steaks were also from King Island. Both were very happy with the dish. 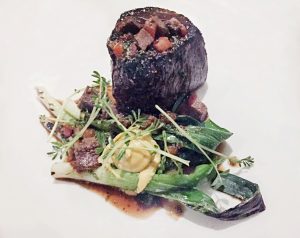 Pucci Girl took a saltgrass lamb loin from Flinders Island, served with shallots, quandong and pickled walnuts. The quandong is the red fruit you can see in the picture, below. Pucci proffered tastes around the table; gluttonous husband took her up on that and remarked later he thought the lamb could have been improved further by having a bit of fat. Still, Pucci Girl said the dish was quite enjoyable. 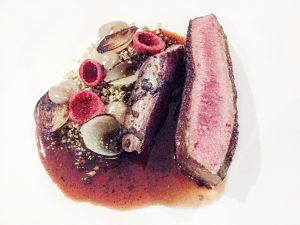 Gluttonous husband took the fish of the day, which was blue cod, served with a barigoule of Jerusalem artichoke, cabbage and yuzu (Japanese citrus). The fish had a beautiful golden crust, but gluttonous husband said it was just a tiny bit overcooked. He thought the accompaniment, taken on its own, was perfectly edible but he didn’t like the way it went with the fish. There were also splodges of a green sauce that gluttonous husband said he didn’t particularly enjoy and couldn’t work what the flavour was. 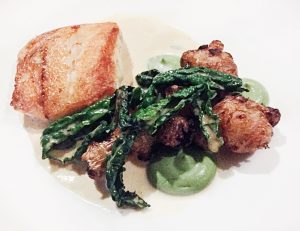 Greedy Girl had the dish featured at the top of this post – pork belly with crackling, served with daikon, mushrooms and an xo sauce.

First of all – this was an enormous serving of pork. Greedy Girl was content to eat one piece and pass the rest over to gluttonous husband. The pork itself was soft, moist and tender and the crackling nice and crunchy for the most part, but could have used a fraction more seasoning.

Again, the accompaniments were OK on their own (except for very large slices of daikon which neither of us really liked) but Greedy Girl didn’t enjoy them with the star of the show, the pork.

We also had a salad and some ‘twice cooked’ chips. The menu says the chips have ‘seasoning’ but that’s in fact chicken salt. It was an unusual touch.

It was time for dessert. The menu offered only three sweet choices, or one could choose from a variety of Tasmanian cheeses. The Francophile took the economically described ‘raspberry, liquorice, lemon yoghurt’. The raspberry sorbet was quite nice but the yoghurt a little too sour for Greedy Girl’s tastebuds. The black shards, which could have easily been mistaken for chocolate, were liquorice. The white ‘sticks’ were soft meringue. It was an interesting dessert, if not a rave. 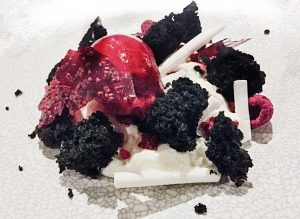 And we were done. We’d been reasonably attended to during the night and it was certainly a good venue for large-ish groups, with plenty of space. The food itself though was a bit over complicated for our tastes and what gluttonous husband and Greedy Girl ate didn’t really come together as cohesive dishes.