Chin Chin is one of those remarkable restaurants that has remained a hot destination for Melbourne foodies over a number of years.

The restaurant opened in 2011 and was revamped in 2016, about 12 months after Executive chef Benjamin Cooper set his stamp on the food. Chin Chin specialises in Thai dishes but there are south-east Asian influences scattered throughout the menu.

In the heart of Melbourne’s Flinders Lane restaurant strip, Chin Chin doesn’t take reservations, except for large groups. As such, most nights there are long queues of hopeful patrons. Greedy Girl has often wanted to eat there and has camped out in the establishment’s ‘sister’ bar around the corner, Go Go, hoping for a spot, but the combination of alcohol and hunger always resulted in giving up and finding somewhere else to eat, such is the demand for tables in the evening.

So when an opportunity presented to have a business lunch there, Greedy Girl jumped at it and being mid-week there were no queues. A party of three, we were able to walk straight in and get a table.

The interior is in the style of Asian dining halls (read: food courts) but this iteration is undoubtedly much more glamorous than any food court Greedy Girl has experienced in her travels. It’s a buzzy, noisy place but it’s still easy to converse.

Greedy Girl’s colleagues have dined at Chin Chin a fair number of times and were very happy to recommend some of their favourite dishes. One of our group has a shellfish allergy but it wasn’t hard to find dishes she could still eat – the waitress kindly alerted her to the presence of shrimp paste in some of our selections but apparently that wasn’t going to cause any disastrous reactions. All good.

This was the first time Greedy Girl had tried a more upmarket take on Thai food in Melbourne since visiting Bangpop at South Wharf a while back. There, she was a bit overwhelmed by the spice, so wondered what she would experience at Chin Chin.

Ordering a few glasses of wine (some Pinot Gris and a Chardonnay) from the list curated by Melbourne wine identity Philip Rich we settled in with a selection of snacks to begin.

First up was the dish featured at the top of this post, corn and coriander fritters with iceberg lettuce and chilli jam. Greedy Girl admits she’s not the biggest fan of coriander but these were brilliantly balanced. She took an experimental nibble of one of the crunchy little morsels and then was recommended to wrap the fritter in a piece of lettuce with a dollop of the chilli sauce inside – a Thai take on a san choy bau. Quite delish.

Our second starter was pulled pork served with pancakes, Asian slaw and herbs. This was another delightful combination. The pancakes were very light and the combination of flavours worked well. It seems pulled pork is the ‘new’ pork belly – it’s everywhere on menus – but of course, the proof is in the eating and this was a triumph. 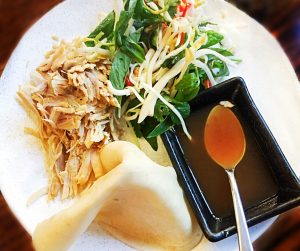 Our final snack was spring rolls – chicken and shiitake mushroom, served with green chilli and a mushroom soy. Again, utterly delicious. The crisp little parcels were not at all greasy and burst with flavour in the mouth. 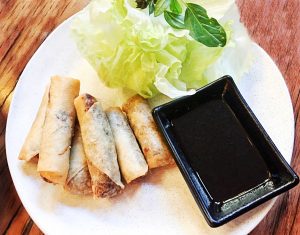 Between the three of us, we decided we’d take a couple of main courses to share. The others swore that the beef rendang was the best they’ve ever tasted. It’s quite a dry curry of wagyu beef with cumin, coriander and toasted coconut. The spice was perfect – on taking a mouthful, the flavours are quite complex but they meld together beautifully. Then, at the end, the heat builds to a very satisfying level but doesn’t render the palate incapable of tasting anything else. An excellent dish. 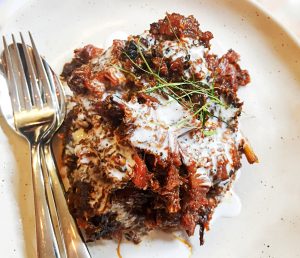 Greedy Girl chose the final dish, a stir fry of chicken with eggplant, beans, cashews and chilli jam. It was another wonderfully balanced dish and a good accompaniment with the beef. The addition of eggplant was inspired. On the website menu, the dish is listed as being made with snow peas but Greedy Girl was more than happy to have the softness and the flavour of the eggplant. Delish. 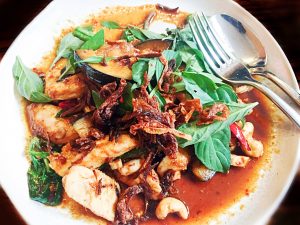 It was a little sad that Greedy Girl needed to head back to the office. Otherwise she could have been sorely tempted by a dessert. Her friends asked for coffee and that proved to be a bit of a shock for us card-carrying Melburnians. Chin Chin doesn’t do coffee as we know it. Rather, they offer a typically Thai coffee, which is cold, and made with sweetened condensed milk. It’s possibly an acquired taste because, after a first sip, both pushed the glass away and started talking about where to go for a ‘real’ coffee.