Central Sydney has come a long way in terms of spots to eat out but in Greedy Girl’s humble opinion it has struggled in the moderately-priced category. No doubt taking rental space in Australia’s biggest city isn’t cheap and it’s possible inner urban or fringe areas are preferred for mid-range dining options – although those areas are also by no means inexpensive.

On a night out after work with foodie friend Madame Lapine, having enjoyed a cocktail or two in various fun bars at the northern end of the city, we spied Lot1 in York Street. The space is divided into two areas – a restaurant and bar, each with their own entrance door. Not able to get a table at the restaurant, we were ushered next door to the quiet (in terms of number of people) bar. Before we accepted that option, we asked if we could still take dishes from the full restaurant menu and were told we could. Sorted.

The bar area is quite dramatic with lots of swirling timber features and is very moodily lit, casting a purplish glow over everyone and everything. As we sat down, music was pumping through the loud speakers. It felt decidedly like eating in a disco. Needing food, we shrugged our shoulders, ordered a few dishes (taking most of them from the bar menu in the end) and a bottle of Prosecco.

Now, Greedy Girl is about to have a whinge because this is something she’s experienced too much of recently – being served sparkling wine (Champagne, Prosecco, Australian bubbles, you name it) that isn’t cold enough. In all our dining experiences around the world, there has been a handful of occasions where the sommelier told us the champagne would improve and become more complex as the chill came off. The important thing to note is: it starts off cold.

Here, the Prosecco was nowhere near cold enough so either the fridges aren’t at the right temperature, too crowded, or the bottles for the day’s service haven’t been chilled for long enough. Having tasted it, Madame Lapine wasn’t happy with the temperature, so back it went. To the staff’s credit they took the bottle and brought us a new one. One imagines they weren’t too thrilled, but they gave us what we wanted.

And so, bathed in swathes of purple, we settled in with a few dishes, a cold bottle and proceeded to chat. This is a big venue – there’s also a basement space for functions. We didn’t expect it to be quiet by any means but what was most surprising is that shortly after our first dish arrived (the arancini pictured at the top of this post), the disco beats were turned off and a lone cellist started playing in a spot near the front windows. Kudos to the restaurant for trying something a bit different but (a) it just didn’t fit the vibe of the place and (b) the cellist, as passionate as she was about her craft, wasn’t particularly good. Greedy Girl loves classical music and is an enormous fan of the cello – played well. It wasn’t awful by any means but it was just, well, a bit jarring.

We made the mistake of also ordering polenta chips, served with a truffled pecorino and aioli. They arrived shortly after the mushroom and truffle arancini and it was all a bit of fried food overload. Still, both dishes were quite edible. 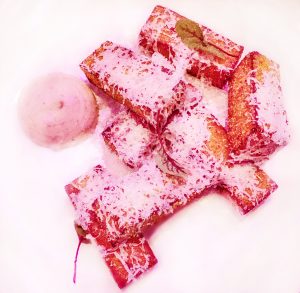 Craving some greens, we took a mix of asparagus and green beans with lemon and egg yolk. The texture was just about perfect although neither of us warmed terribly to the sauce. 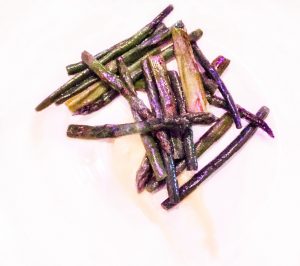 Our final dish was octopus with potato, Sicilian olives and garlic. The octopus was a bit too firm to the bite but the flavours were quite OK. 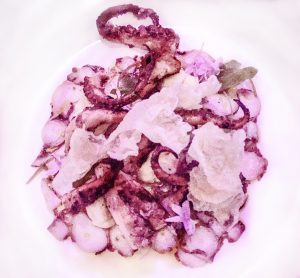 And we were done – we’d sipped and munched our way through a couple of the cellist’s sets and we weren’t inclined to linger longer.

Lot.1 is spearheaded by executive chef Adam Swanson who apparently has spent time learning the finer points of northern and southern Italian cuisine in Italy and has created a menu, executed by head chef Ricardo Cavuoto that they describe as traditional Italian plates with a modern twist. Our experience, apart from the slightly out of keeping entertainment, was quite reasonable.