Champagne brunch – Up & Above at Okura Prestige Bangkok

There are few finer ways to spend a lazy Sunday than a champagne brunch. Almost every major hotel in Bangkok offers brunch but the alcohol offerings vary significantly.

We were all set to go to a different hotel which had a Spanish take on brunch but sadly it was only available on the first Sunday of each month. Plan B was the Okura Prestige Hotel and Up & Above.

It has to be said, Bangkok isn’t the most picturesque city in the world for architecture, but this hotel, part of the Park Ventures complex in Lumpini, is an attractive building. The restaurant (and hotel lobby) is on the 24th floor and it’s certainly a very impressive fit out.

We arrived promptly at noon and were shown to a table next to floor to ceiling glass. It would have been a pleasant enough spot (if a bit warm with the sun radiating in) but we had other needs – specifically a power outlet to charge our devices before heading to the airport for our evening flight. Not a problem for the very obliging wait staff, who showed us to another table with a power point underneath. 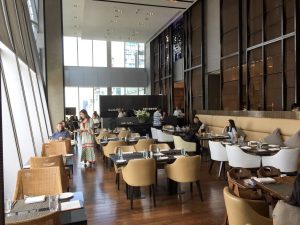 And so we settled in, with a very accomplished jazz trio playing. There are three brunch options available – soft drinks only, alcohol (including prosecco but not champagne) and the full champagne brunch, serving Lombard et Cie Brut Reference from Epernay. 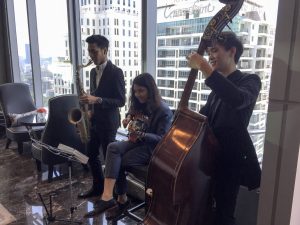 The spread here is possibly one of the best Greedy Girl has ever seen at a champagne brunch. There are a number of stations manned by chefs, including a fresh pasta bar, a carvery serving beef wellington (more on that later) and suckling pig and, of course, a sushi chef, as well as the usual desserts, seafood, cheese and salads.

Gluttonous husband immediately spied the oyster selection and took one of each variety. From left to right they are Pickering Passage (from Puget Sound in Washington state), Fine de Claire from France, Smoky Bay (South Australia) and the Tasmanian flat oyster. 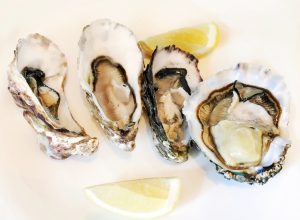 Gluttonous husband prefers smaller oysters, finding them sweeter than the big meaty ones and this was borne out here. The Tasmanian oyster (the gigantic one on the right, above) was perfectly edible but didn’t have anywhere near the flavour of the others. His favourite? The one from Puget Sound.

Greedy Girl started with sushi and took her usual selection – all utterly superb. There was also tuna, salmon and kingfish sashimi which gluttonous husband later devoured. 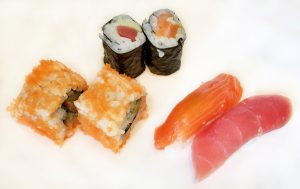 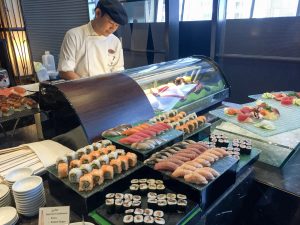 The sushi chef at work

Staying with seafood, we tried the lobster bisque – a hard dish to get to the table without slopping the soup around the bowl. It was perfectly pleasant without having a huge depth of flavour. 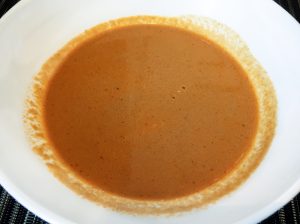 As part of the champagne brunch, there is a small a la carte menu. We immediately ordered the foie gras, pictured at the top of this post.

OMG. This was pan seared to perfection, served with a smoky pumpkin puree and a fig and almond disc. It was a beautiful combination of flavours and textures. Gluttonous husband ordered a second serving later in proceedings and said the first dish was far from a fluke. Yum.

Another dish to order was Maine lobster served with a citrus beurre blanc and shaved asparagus. Generally we’ve been disappointed by lobster served at these brunches but this was pretty good. The claw meat had been taken out and put in the half-shell, alongside the tail meat. A nice touch. 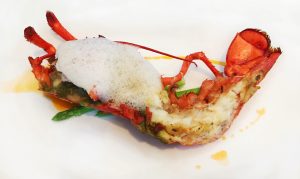 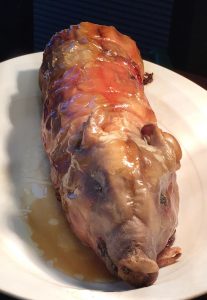 … And here’s the serving. He commented the meat was very moist and tasty. His only complaint was the lack of crispy skin. 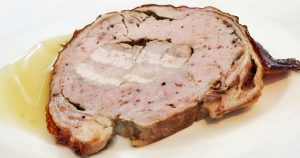 A generous slice of pork

Greedy Girl was quite taken by the look of the beef wellington. And here it is … 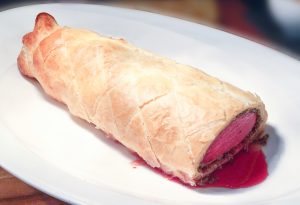 … But then the chef ‘carved’ it. She cut too thin a slice and it just disintegrated – mushrooms, crepe, pastry, meat fell apart. Greedy Girl thought the chef would see her error and cut a fresh slice. Nope. It just got lobbed on to a plate. It was a mess – a tasty mess – but not the chef’s finest attempt at plating. 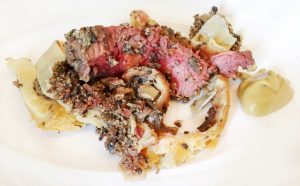 There’s beef wellington in there somewhere …

Gluttonous husband decided to keep going with meat and ordered another item from the a la carte selection – beef cheek with saffron risotto, baby carrot and carrot pickle. 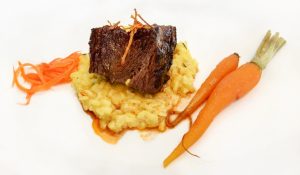 For something that had obviously been prepared a fair while, gluttonous husband said it was a triumph. The meat flaked apart and the risotto was still slightly firm to the bite. He was a happy chappy.

Greedy Girl needed something to help soak up the champagne and went to the pasta bar. By this stage only a few pastas remained and thinking the squid ink linguini probably wouldn’t be a good match with bolognese sauce, she opted for the fettucine coloured with beetroot. Thankfully, there was no flavour imparted, just colour. It was quite a decent dish. 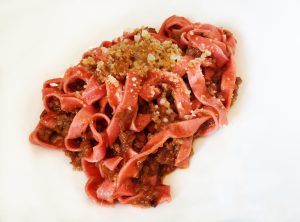 Time was flying and we wanted to have a dessert. There was also a dessert cooking station where gluttonous husband was able to order one of his all-time favourites – crepes Suzette. One of his go-to desserts from years gone by, he said this was absolutely perfect – the right level of sweetness and bitterness from the orange. 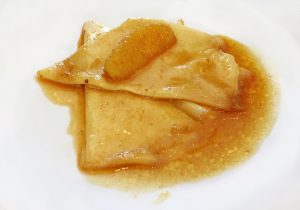 Not surprisingly, Greedy Girl opted for the chocolate lava cake, which took 10 minutes to prepare. While it perhaps wasn’t as dark a chocolate as she’d like, it was pretty spectacular nonetheless. 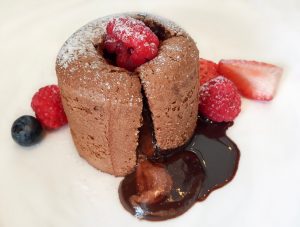 And, we were done. Two double espressos and we hit the road, having eaten and drunk splendidly well.

This was a true feast and the wonderful wait staff just added to the experience. They were just attentive enough and were more than happy to keep filling our glasses as much as we wanted. Often, towards the end of a champagne brunch, the staff come over to advise they’re about to stop pouring. Not here. The only comment they made was to tell us the buffet was due to finish, if we wanted to help ourselves to more delights.

All told, the champagne brunch was 3900 Thai Baht per person. Sign up for the Okura Prestige member rewards program and get 10% off that on the spot.

We’ve done quite a few brunches in Bangkok and this was certainly the best so far!