In a city chock-full of wonderful food experiences, why plump for Chinese food in Bangkok? When it’s part of an accommodation deal, of course.

We’d already experienced coupon dining at Man Ho during our last Hong Kong visit. You can read that post here. The HK restaurant decor is over the top. Here it’s somewhat muted – dominated by timber panelling and red paper lanterns.

Generally, restaurants in Bangkok have serious air-conditioning. We were shown to a table next to floor to ceiling windows; given it was lunchtime there was enough warmth coming through that we didn’t need the jackets we’d brought with us.

The deal at the JW Marriott, through the Luxury Escapes website, was three nights’ accommodation, executive lounge access, an airport pick-up and a five-course Chinese banquet at Man Ho. We actually received six courses, but, shhhh – don’t tell anyone.

Our first dish was a selection of dim sum. From left to right, we had har gau (steamed prawn dumpling), siu mai topped with tobiko (flying fish roe) and a deep-fried golden shrimp ball which, unusually, was stuffed with cheese. All three were very enjoyable, although the cheese didn’t add much to the shrimp ball.

Next up was Shanghainese hot and sour wanton soup. This is quite a viscous soup, with a strong sour tang that dominated the dish. There were two wantons which were quite tasty and there was a bit of spice but it wasn’t a combination Greedy Girl particularly enjoyed. 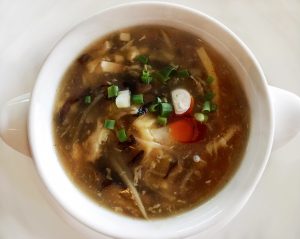 Australian scallops were next – this was pan fried, sitting on top of an egg and crab custard and a sprinkling of dried scallop. It was very tasty. The scallop was cooked well. 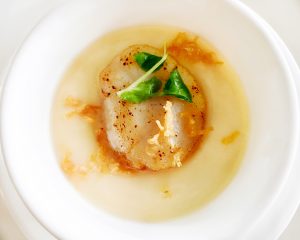 Seafood continued. This was a river prawn stuffed with shrimp paste and spicy garlic, served with some asparagus spears. The crumb here was particularly spicy. We were reaching for the Chinese tea to calm down the mouth after a few bites. The prawn was very tasty but neither of us wanted to crunch down on the head, feeling somewhat full. 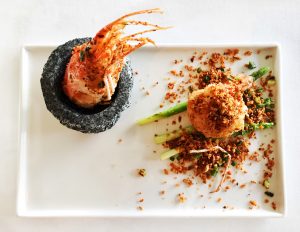 Spicy prawns with garlic and asparagus

Our final savoury course was the dish featured at the top of this post, served in an unusual granite bowl. It was bean vermicelli noodles with shredded wok-fried duck and black pepper. It was good – the flecks of black pepper were quite powerful but didn’t overwhelm the duck. A great way to finish.

Finally, we were offered mango pudding for dessert. Slices of fresh mango sat on top of custard and a drizzle of coconut milk. It was the perfect foil for the spiciness of the other dishes.

And we were done. We headed out, past a lot of big tables; the restaurant was rather busy but admittedly we were there on a Friday lunchtime.

This was more than acceptable as part of a deal and most of the dishes we’d be happy to receive in any Cantonese restaurant around the world.