The chef/owners of Fico Hobart describe their offering as bistro-meets-fine-dining. It’s certainly a fun-looking place with quirky art, dramatic lighting and a small modern Italian menu that reads well.

Hobart seems to be a place where the ‘feed me’ concept has a lot of currency. Having already offered up our stomachs to the whims of the chefs at Franklin the night before, we decided to take some control over our choices.

Having already decided to head out to the nearby Gold bar for cocktails, Greedy Girl chose the ‘Fico’ gin and tonic and gluttonous husband tucked into a ‘Last Rites’ IPA. While the beer was more than acceptable, the gin (infused with fig – hardly surprising given Fico is Italian for fig or fig tree) was very strong and not entirely pleasant. Time for water …

Most courses are designed for sharing. We opted to start with kingfish, marinated in soy with wasabi and coriander. Nicely presented, some pieces of the fish were a bit lacking in flavour, while others had quite a pronounced taste.

Gluttonous husband opted for a dish he doesn’t often see on our dining adventures – lamb brains (pictured at the top of this post). This was lamb brains served tempura style and they were satisfyingly crunchy, served with a meuniere sauce – essentially butter, lemon and parsley. It was a very good dish.

Greedy Girl opted for a venison carpaccio with hazelnut, artichokes and a horseradish cream. The artichoke and nuts gave the soft meat additional texture. The flavour combination was interesting – initially the hazelnuts were dominant but it was a dish that, the more you ate, the more you wanted. 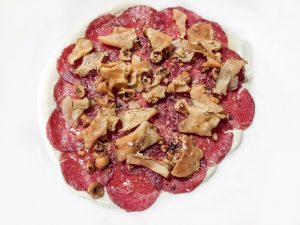 Time for mains. Gluttonous husband took the fish of the day, served whole. This was grilled garfish with bonito butter and greens. It’s certainly not the most handsome of fish but it was a very tasty plate of food. One of the downsides when one’s eyesight isn’t as good as it used to be is trying to see the bones – made doubly tricky by a dark and atmospheric dining room. Still, gluttonous husband was up to the challenge. 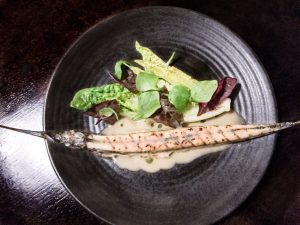 Greedy Girl wanted a feed of pasta. This was fresh spaghetti served with braised baby octopus and marjoram. The menu states that pasta and risotto is served al dente and this absolutely fit the bill – it was very firm to the bite. The octopus was a bit lost but the sauce with the spaghetti was sublime. The wait staff saw us trying to mop it up and immediately brought some extra bread so that none would go to waste. 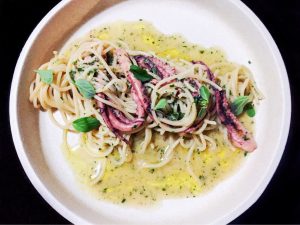 That was a nice touch – but it was a little weird that we’d also run out of water on the table – the carafe was taken away and not refilled. With one hand they give, the other they take … The quality of service varied significantly. Some team members gave us the distinct impression they’d like us out the door asap, while others were very hospitable. It was an odd experience.

Still, there’s a lot to like about the food and it’s an interesting spot. The ‘feed me’ menu is currently priced at A$75 per person, so would be a very good deal. 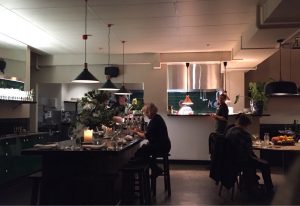