Since entrepreneur David Walsh unleashed the extraordinary Mona on the world, the quiet city of Hobart has been transformed.

The Tasmanian capital was pretty much on the map for two things previously; the end of the famed yacht race from Sydney and the site of Australia’s first legal casino – Wrest Point at Sandy Bay, which opened way back in 1973.

Nestled on the water and surrounded by lush agricultural districts, Hobart has always had a reputation for food and wine but, in recent years, this has moved into an entirely new phase. Hobart has shaken off a prolonged period of economic gloom and Mona has undoubtedly had a lot to do with that.

The waterfront area, always pretty, is vibrant. There are great hotels and the restaurant and bar scene also appears to be thriving. Coffee in Hobart is also pretty damn fine.

The central business area of Hobart and the wharves, as well as the thriving Elizabeth Street strip in North Hobart are all within easy walk of each other. Here are some cafes we found by chance, while others were recommended by staff we met in the various restaurants.

You’ll find a lot to like in Hobart – and don’t miss out on the exceptional Mona, which is about a 30 minute drive out of town, or head out on the ferry.

This is a tiny shopfront on Collins Street, just around the corner from the Elizabeth Mall. There are a few tables out front (for brave souls in the winter) and four stools at the window.

The coffee is sourced worldwide but roasted in Melbourne. We took our usual piccolo and double espresso. The flavour was round but not exactly robust.

Still, it’s a perfectly pleasant spot to get your morning coffee in the centre of town. The website states it’s not open at weekends, but during the holiday long weekend in June, it did open on Saturday. Presumably the team is happy to vary things according to perceived demand. 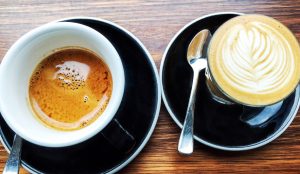 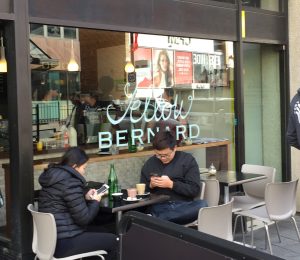 Eagle-eyed Greedy Girl spied two people sitting on stools in front of an open window of a small shopfront on a Hobart backstreet and immediately decided to investigate.

Most seats in this tiny brunch establishment are stools around the open kitchen. Small Fry styles itself as kitchen/coffee/private dining/bar. The place is open from breakfast to early afternoon (most days) and for evenings can be booked as a private space.

The menu is small and prepared with intensity by a very busy chef. It’s noted for its doughnuts cooked to order and tossed in a large bowl of cinnamon and sugar. Greedy Girl would have loved to try one (sans the sugar, of which she’s not fond) but there’s a sign above the cooking area admonishing diners to not request any changes to the menu. Ah well.

The coffee, however, is full of oomph. Sensationally strong, great colour and prepared with skill. Generally Small Fry is open every day, but on weekends it closes quite early. Take note of the small clipboard at the entrance that gives the Small-Fry team’s tips for where else to visit in Hobart for good eats and drinks. 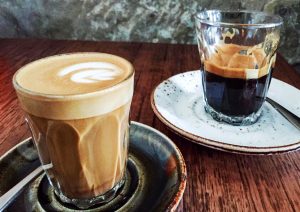 Hot and strong … just the way I like it 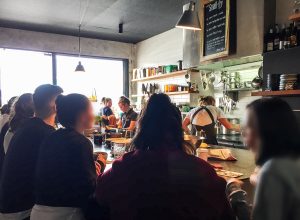 Shoehorned in around the kitchen

This is a huge space, dominated by bare brick walls. It’s certainly warm and comfortable enough although it’s on the fringes of the main shopping area – just across the road from the Royal Hobart Hospital.

Still, they’re serious about coffee, operating a multi roaster program to ensure a brew to your liking. When gluttonous husband requested his usual double espresso, he was offered single origin Colombia or Kenya – he took the former. Greedy Girl’s piccolo was the house blend and perhaps a bit more robust than she experienced elsewhere in Hobart. We were told this blend was roasted a bit darker to bring out the chocolate and caramel tones.

We didn’t try the food and didn’t see anyone else eating while we were there but there’s a selection of extraordinary looking pastries on display on the front counter. 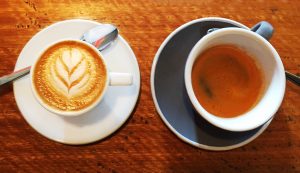 This is a vegetarian and gluten free cafe that roasts its beans in-house. It’s rather retro in look and feel and, on a weekend morning, extraordinarily busy. When we did eventually get served, the coffee was a bit of a let down, with no real flair or flavour. Still, we seemed to be in the minority, so perhaps the barista was a bit rushed. It’s clearly a local hangout. 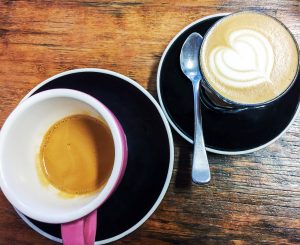 A Taiwanese cafe isn’t usually where you’d head for your coffee fix but, having spied the St Ali coffee sign on the door of this tiny, narrow shopfront, we decided to give it a try (St Ali being a noted Melbourne coffee roaster). Opting for our usual piccolo and double espresso, we had a nice, smooth result but, admittedly, it didn’t pack a huge punch. Still, it’s open Sundays (a bonus for that area of Hobart) and there’s free wi-fi, if you ask the barista nicely for the password. On a side note, the food looks great but another time perhaps … 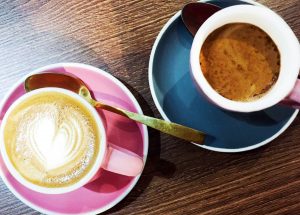 This cafe is next to the entrance for the Mona ferry. It’s a very pleasant spot to sit, with a range of comfy sofas inside and a large deck area outside overlooking the water. Even on a winter’s day, plenty of hardy folk sat out there enjoying the weak sunlight.

There is a range of cakes and snacks, a full bar and a decent menu. Service is very pleasant, if a bit slow. It was gluttonous husband’s turn to have a break from coffee and he sat back and sipped a beer, while Greedy Girl took a piccolo and a chocolate brownie. The coffee was fine but a bit bland. Still, for what obviously attracts a big number of tourists, it’s a decent option if you’re at the waterfront. 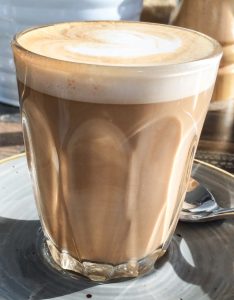 A little weak, but drinkable 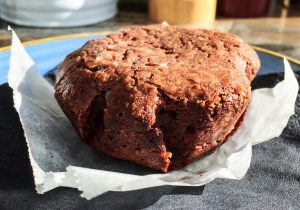 This is virtually at the end of the food strip on Elizabeth Street in North Hobart. It’s a huge, light-filled space and kudos to the front of house team who kept things moving exceptionally well. It’s a fun cafe with what looks like a serious food pedigree – there are big Asian influences in the food, particularly Korean ones.

Head chef John Retzer presides over a very busy open kitchen but they get on with delivering plate after plate of good looking food, all the while looking like they don’t break a sweat. The care extends to the coffee where, if you order an espresso, you get a postcard telling you exactly what style you’re getting (see the picture at the top of this post). This apparently was ‘Fazenda Santa Rosa’ from Brazil, with nougat, plum and milk chocolate overtones. It certainly had a delicious aroma and plenty of oomph. Greedy Girl’s piccolo was also prepared with care. It was smooth and very, very enjoyable.

The Elizabeth Street strip is an easy walk from central Hobart but just note that there are a few restaurants and bars that don’t get going until the middle of the afternoon. 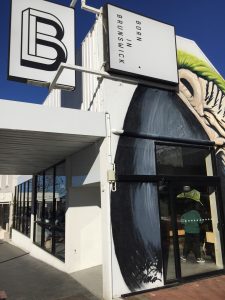 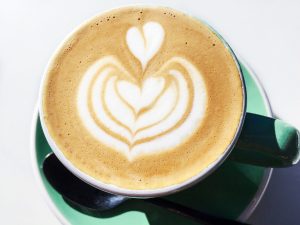 This is another North Hobart institution with serious street cred. Of a weekend it quickly gets packed out and our first attempt at getting in for a brew was unsuccessful. After finding a spot in the sun at Born in Brunswick we tried again on our way back into town and found two stools at the bar. Gluttonous husband tried an espresso and pronounced it perfectly acceptable. The cafe uses Melbourne-roasted Veneziano coffee. It was perhaps too much of a contrast after Born in Brunswick – Greedy Girl found it a bit cold and the staff somewhat harried but, c’est la vie. There are plenty of patrons, so they’re clearly doing something right. 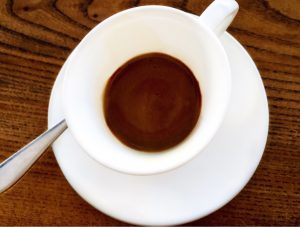