Asia has it all going on when it comes to champagne brunches, so when we found out about the Dom Perignon Sunday brunch, we were there in a Hong Kong minute.

Ozone is the restaurant/bar/nightclub attached to the swanky Ritz Carlton in Hong Kong, on Kowloon side, occupying the upper floors of the gigantic International Commerce Centre. Given the hotel reception is on the 102nd floor, it’s not an elevator ride for the faint-hearted – and then you take a second, much smaller lift to the 118th floor to Ozone.

We were booked in for commencement (if you’re going to shell out for vintage Dom Perignon, you want to make the most of your time) and we arrived possibly 15 minutes ahead of our reservation. All that’s to be done is to wait in the reception area of the hotel and look for the red lights on the elevator doors to Ozone to turn white – that’s the signal that the floor is open.

The moment the colour changed, we crammed into the small lift (which only takes about eight people at a time) and headed ever skywards. The restaurant floor is L-shaped and looks out over Hong Kong island and Victoria Harbour. You’re up so high, the soaring towers over on the island look positively puny.

We were told on booking our chances of having a table by the window were slim – that was just fine with both Greedy Girl and gluttonous husband, not being known for our love of heights. But the table we were shown to was pretty much just abysmal. In the middle of a high traffic area, it abutted the fresh seafood station – the constant toing and froing of people, plus the smell of the produce were too much. Immediately we asked to be moved.

And we were – without a fuss. We were shown to a lovely low table for two, on very very comfy sofas – next to the window. Sigh. Why put someone in a clearly inferior spot when it wasn’t necessary? We tried not to let the momentary ‘grrr’ get us down – we were too busy trying to recover from being hurtled several hundred metres into the stratosphere and settling our nerves with the first sips of the beautiful 2009 Dom Perignon vintage.

There’s a balcony/terrace area sweeping around the restaurant but only part of it is open for public seating. On a gloriously sunny afternoon, this area was jam-packed with brunchers no doubt fortified by the ability to smoke out there. Note to diners who want to avoid the stink – try to keep away from the main doors leading out to the terrace. At any rate, the champagne would warm up far too quickly to sit out there for long.

So, we settled in and perused the food offerings. At each table there’s a nicely-presented menu to take you through proceedings. The base Dom Perignon (not rose – we actually didn’t see any of this poured) is HK$1488 plus a 10% service charge for three hours of indulgence. 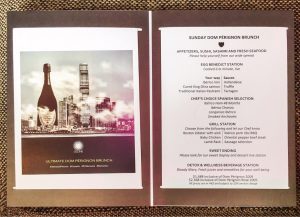 Unlike many other Sunday brunches we’ve attended in Asia, we had to face up to several key foodstuffs not being available in this spread – no oysters (gluttonous husband was very disappointed), and no foie gras of any persuasion (we both cried).

There was a smallish selection of sushi and sashimi, some decent looking prawns. That’s where we started. 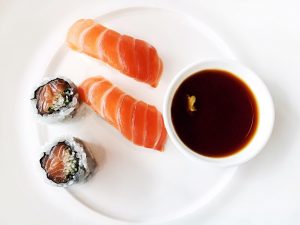 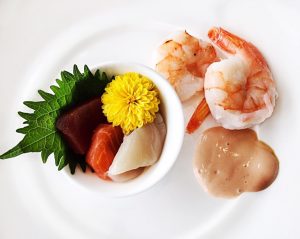 The salmon sushi and handrolls were delicious. Greedy Girl went back a few times to replenish her supply. She was less enamoured of the little bowls of sashimi. You can just discern the incredibly deep red tuna in the picture above but it essentially tasted of nothing. The prawns were firm and pleasant and a touch of tangy sauce was pleasant.

One of the dishes available from the menu is a half Boston lobster with aioli. Gluttonous husband went for this and pronounced it edible. Unfortunately with the volume being prepared, these lobster tails dry out very quickly and this was no exception. 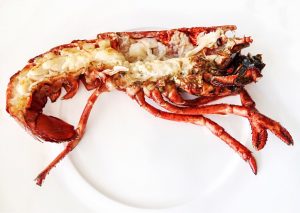 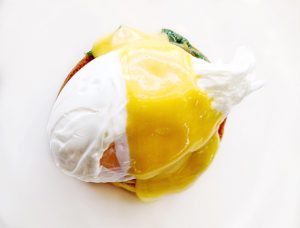 ’Live cooking’ consisted of the poached eggs sitting in liquid and dishes essentially being assembled to order. The egg wasn’t completely cooked through but there was no great spurt of luscious golden yolk when you sliced it. Greedy Girl was also too late to stop the fronds of wilted spinach being added. It was a bit watery and didn’t enhance the flavour at all.

We were quite taken by the tapas table – a melange of Spanish and Mexican treats. The meats in particular were very nice – iberico and chorizo – while gluttonous husband enjoyed a couple of smoked anchovies as well. 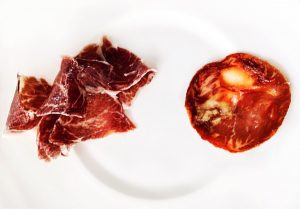 A particularly nice surprise were small dishes of guacamole with pico de gallo and corn chips, which Greedy Girl decided to pile a few more pieces of iberico on the side. This went down a treat with the champagne. Delish. 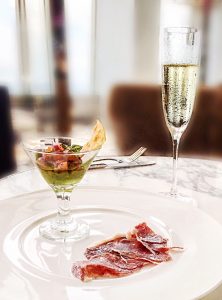 And so we settled in – the memory of the elevator ride fading with every sip, we avoided the vertigo-inducing sights for the most part, except in the bathrooms which have simply extraordinary views. Back to the table for another sip or three to recover. 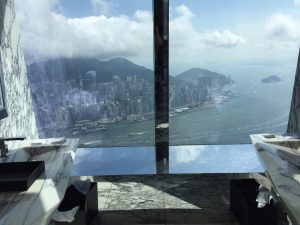 Loo with a view

It was time for more meat – cooked this time. There are very very good meat dishes here. Gluttonous husband was taken by the pork ribs and baby chicken. The meat came away from the rib without delay and the bone was left satisfyingly clean. 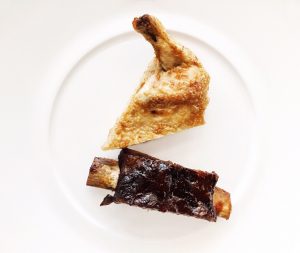 We also had to try the oriental pepper steak. This was carved to order and pleasantly pink and juicy. It was an opportunity to also make further use of the sauces available on the egg station, as well as a dollop of excellent Dijon mustard. 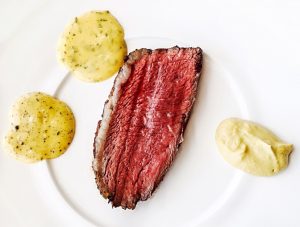 There is also a selection of sausages and a lamb rack, with individual cutlets carved. 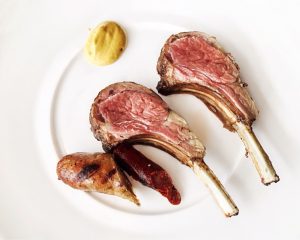 It’s amazing how quickly three hours can go by. Before we knew it, we were indulging in a few sweet treats. Unusually, gluttonous husband decided he’d go for some of the ice-cream on offer. 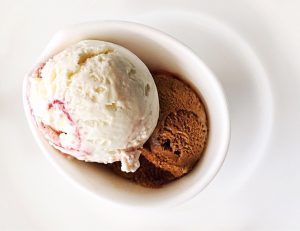 The dessert table is chocolate dominant. Greedy Girl helped herself to a few delights. 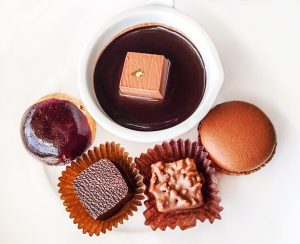 Greedy Girl was ready to call it quits, when gluttonous husband came back to say he’d found a ‘fondant’ station. Dreaming of the last Sunday brunch fondant she’d had at the Okura Prestige in Bangkok, Greedy Girl got quite excited. More hot cake than fondant, it was OK, but not executed with any particular flair or finesse. 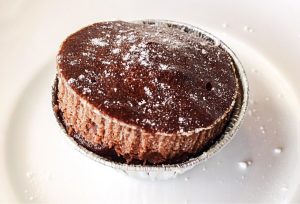 Coffee is also on offer – you make it yourself from a Nespresso pod machine in the middle of the dessert table. That was a bit sad – it would have been a classy touch for a proper barista-prepared coffee to conclude a high-end brunch.

But we weren’t quite done. The staff, who for the most part were very good, suddenly appeared with buckets of popcorn which were ferried out to the terrace. Gluttonous husband’s hand went up like a shot and the friendly French waitress said she’d get us a serving. 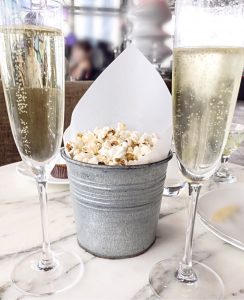 Two lovely chilled glasses of Dom Perignon and the truffled popcorn went down a treat. We were quite content.

All told, the food was decent (without being spectacular) and the attention from the wait staff was reasonably good. Only once did we drain a glass and had to wait around a minute for it to be refilled. There was also plenty of water. We could have also helped ourselves to a selection of cocktails, but honestly, when you’re enjoying such a beautiful champagne, why muddy the waters?

To get full value from the brunch, you need to be a fairly determined imbiber. We probably got through a bottle of champagne each over the three hours, giving us our money’s worth.

But would we do it again? Perhaps not. Champagne is a beautiful thing, but there needs to be better food to make the full brunch experience worthy of a repeat visit.

Ozone at the Ritz Carlton