Where to stay in Taipei – Marriott Taipei

When deciding which city is next on the itinerary, Greedy Girl and gluttonous husband have a simple yardstick – can we find good eats there?

While Greedy Girl had transited through the Taiwanese capital of Taipei a great many years earlier, the emerging restaurant scene has definitely put it back on the agenda. So, when deciding where to stay in Taipei, we looked for options close to our preferred eateries and came up with the Marriott Taipei.

This is in the Zhongshan District of Taipei. Views from the rooms ending in 08 have a direct view towards the famous Taipei 101 tower. In the foreground is Taipei’s second international airport, Songshan. Sadly we didn’t fly in there which would have made it a spectacularly easy commute to the hotel.

With aircraft flying in day and night it could easily have been a noisy spot but the rooms were very quiet. We opted for an executive club room which had the widest king-sized bed we’ve ever seen and we were spoiled for space. It all looked fairly state-of-the-art, but didn’t have any USB slots in the room to recharge phones and tablets.

Still, the decor is pleasing – muted tones, modern look and feel. The bed, as is the case pretty much everywhere in Asia, was firm but had a decent range of pillows. There was a large screen TV which had a few English options, plenty of hanging space (if not a high enough hanging rail to prevent long dresses bunching on the floor).

The bathroom features the Thann brand of toiletries (fairly common in Marriott hotels throughout Asia) and the large shower had a dual head (rain shower plus detachable rose). 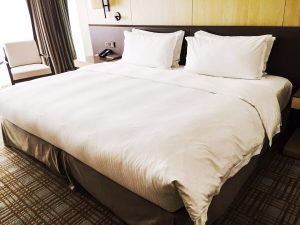 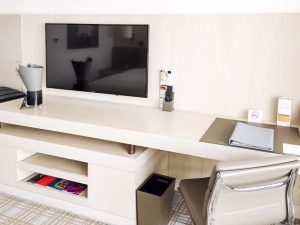 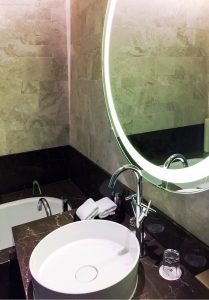 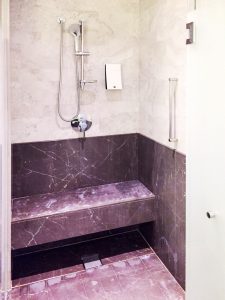 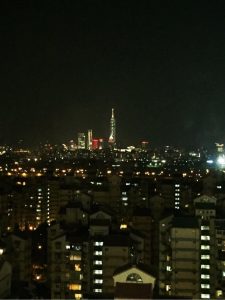 The view towards Taipei 101

We took full advantage of the executive lounge which was quite enormous (see the picture at the top of this post). It had to be said though that the variety of food was a bit lacking and didn’t have an enormous array of drinks. If you wanted a cocktail, you needed to cobble it together yourself from the array of spirits.

At breakfast, the obligatory chef was on hand to make egg dishes and the spread was reasonable, if not terribly exciting. Afternoon tea is also on offer and the pastries were dainty and quite enjoyable. 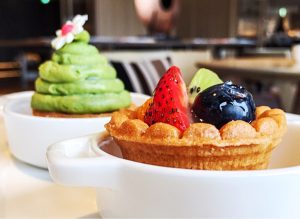 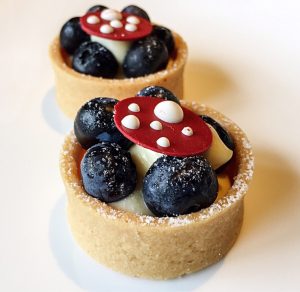 Almost too pretty to eat

In the evenings, there are plenty of spots that you can while away a couple of hours although be warned that the air-conditioning levels are ferocious – bring a wrap or top if you’re visiting in the summer. The view from the far end of the lounge is also quite pleasant. 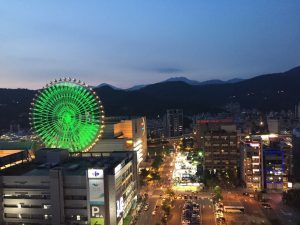 The view from the executive club floor

This floor is also home to the spa, gym and swimming pool. The gym looked to have a great range of equipment. The pool was great, with another wonderful view over the adjacent ferris wheel, but while we were there, the prevailing winds made it a bit difficult to find shelter. 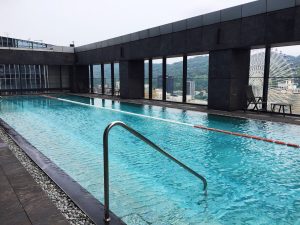 A note about the staff – obviously working in a hotel like this, English is a pre-requisite and most staff we interacted with had reasonable skills. The girls in the executive club were very good; it gets a little unnerving for us informal Australians when everyone stands up as you walk in but that’s their way of showing respect.

The hotel was literally in the next street to our number one restaurant target, Raw and even though it was a long way from downtown Taipei, the local train system is more than easy to navigate. We purchased a three-day pass for unlimited rides on the train system (be warned, the passes we got don’t work on any buses) and it was a very easy city to negotiate. A bonus is the hotel offers a free local smartphone for your use which was exceptionally good value in using Google maps on our adventures further afield.

It was comfortable and enjoyable, although it didn’t really set our hearts on fire as a beacon of hospitality. Still, if you want to stay away from the hustle and bustle of downtown Taipei, it’s an excellent option.