On our final night in Taipei, and having sampled the famous beef noodles for lunch, we decided it was time for more local takes on classic Chinese dishes. Off we went to Yen Taipei.

This is in the downtown part of the city, a couple of blocks from the famed Taipei 101 building – not that you can see it from the restaurant (in the W Taipei Hotel) because Yen is on the wrong side for that view. Still, the vista as you enter this 31st floor sweeping restaurant is quite dramatic.

The tables are spaced well apart and grouped around the floor to ceiling windows. This is described as the W Hotel’s fine dining restaurant in Taipei and it certainly has a luxe feel.

The menu here goes on for pages and, initially, it’s a little overwhelming. Opting not to have a banquet – which would have been just a ridiculous amount of food – we settled on a few of our favourite dishes. Happily, it wasn’t an outrageously busy night so failing to order the special roast duck in advance didn’t count against us.

Greedy Girl was in the mood for a cocktail, choosing what the drinks menu hopefully titled an ‘Asian cosmopolitan’. Let’s get the bad news over first. Sugar rims on cocktail glasses just have no place on Greedy Girl’s list of preferred tastes and this didn’t do anything to disabuse her of that notion. A mouthful of sugar (not her favourite substance at the best of times) followed by a rather sickly cocktail combo wasn’t the start she was hoping for. Discreetly trying to scrape the sugar away, it was an OK-ish citrus-based beverage with tastes of honey and ginger. Greedy Girl will stick with the ‘real thing’ from here on in.

As we looked around the floor, the sight of the full roast ducks and suckling pigs lined up for butchery (see the picture at the top of this post) was commanding. Normally Greedy Girl has some animal welfare pangs when confronted with this but her tum won out. We ordered half a roast duck and some suckling pig along with a couple of other dishes and away we went.

An amuse bouche of sweet potato chips and a tangle of sticky sauce was brought to the table – an unusual combo. Still, it was a nice touch.

Banquets are the way to go here and, for the most part, most dishes are on the large side. The restaurant clearly caters very well for groups – just for twosomes it’s a power of food.

First up from our selections was a very dramatically presented plate – Penghu tiger prawns deep-fried in a golden batter. These are served with a chardonnay sauce. While the prawns were cooked nicely, the sauce wasn’t spectacular. 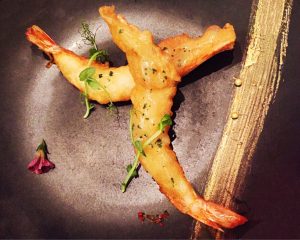 We then moved to pork. This is kurobuta pork belly, expertly prepared with amazingly soft meat and beautifully crispy skin. It was amazing – so juicy and tender, it needed nothing – no sauce, no accompaniment. Delish. 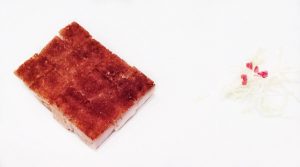 And then, the undoubted triumph of the evening – a half roast duck with pancakes and sauce. We were very excited to have the chef next to us expertly slicing the meat while a colleague rolled the pancakes. 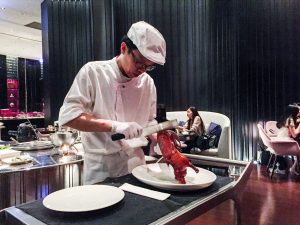 Inside the pancakes we were treated to the usual suspects – cucumber and spring onion but also red pepper – a local twist perhaps? The first two were presented separately and then the rolls kept just piling up … 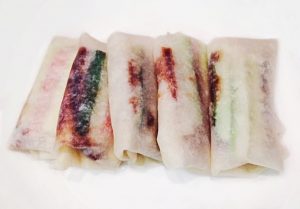 A pile of roast duck rolls

And then, we had a pile of roast duck left over to just savour (in between bites of the remaining pork). What a delightful sight … 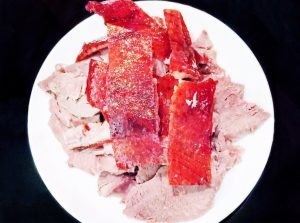 We didn’t expect to have full duck overload but it was a stunning feast. Digestion being aided by some very good Jasmine tea, we happily snacked and snipped our way through a huge amount of meat.

It would have been perhaps ideal to choose more, smaller dishes, but it’s very hard to go past the amazing quality and skill on show here with the roast meats. This is accomplished food that had been mooted to win a Michelin star in Taipei’s first list in 2018 but didn’t quite get there.

Still, for a delightful night out with very good service and great quality dishes, it’s hard to beat.