One of the long-established luxury hotels at the Rocks end of central Sydney, the Shangri-La has one of the most iconic views in the world from its bars and restaurants on the 36th floor. What’s not to like about dinner with a view over the famed Harbour Bridge, Opera House and the lights of Luna Park and North Sydney?

We decided to try a deal from the Lime and Tonic website, offering a three course dinner with a glass of sparkling wine each at Altitude, the hotel’s modern Australian restaurant. It’s won a few awards – fine dining restaurant of the year in Sydney by the UK’s Luxury Travel Guide for 2017, plus a Tourism Accommodation gong for top restaurant. The deal worked out to be around A$85 each for two people, certainly a good enough price point to warrant investigation.

The hotel describes Altitude as fine dining. That doesn’t necessarily accord with Greedy Girl’s view but given we were on a restricted menu because of the Lime and Tonic deal, perhaps there is more to the restaurant we didn’t appreciate.

But, on a mild winter’s night, Greedy Girl and foodie friend Madame Lapine were shown to a table next to the floor-to-ceiling windows and overlooking Sydney’s icons. Each of the three courses had a few choices and we were able to negotiate something that worked for the various dietary requirements at the table.

The welcome from the staff was warm and they popped down a complimentary amuse bouche in front of us – rye crisps with a little salmon mousse for Greedy Girl and plain for Madame Lapine who doesn’t eat dairy. 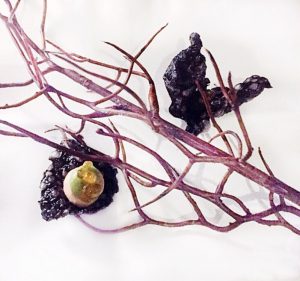 The menu read OK. For starters we had a choice of stracciatella, a medley of beetroot or hiramasa kingfish sashimi. Greedy Girl was in need of comfort food, so opted for the cheese, while Madame Lapine took the beetroot. 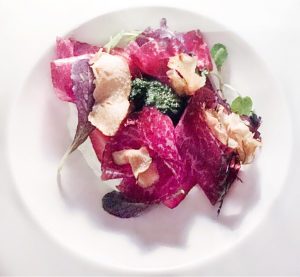 The little artichoke chips were a lovely texture but the dish itself was a bit lacking, perhaps needing a bit more seasoning. Certainly the quality of the wagyu bresaola was good and the inclusion of the strawberry was interesting. It kind of worked.

Madame Lapine’s beetroot was a vibrant dish, served with persimmon and pomelo. She was very happy with it, saying the flavours were unusual but worked together well. 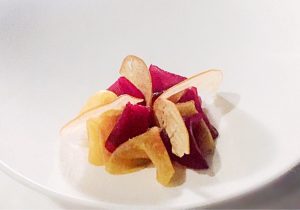 For our main courses, Greedy Girl took the wild mushroom risotto, served with a 63 degree egg. 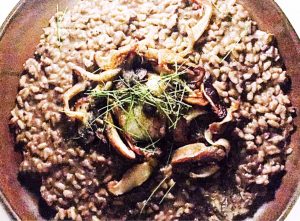 Essentially the sous vide egg was like a very light poached egg and it mixed through the rice for added moisture. The mushrooms were nice and the texture of the rice quite good but again the dish didn’t have any great wow in terms of flavour.

Madame Lapine chose the dhufish from Western Australia. This was a large serving accompanied by broad beans, red wine-braised octopus and a capsicum puree. The fish had nice flavour but was perhaps a little on the dry side. The octopus was a nice addition. We also opted to take a rocket salad to share, which was at an additional cost. 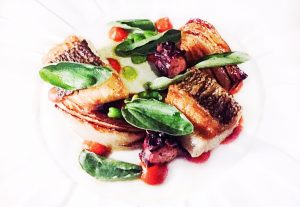 For dessert, Greedy Girl had the dish at the top of this post, a chocolate sphere mousse with caramelised banana, banana ice-cream and shredded chocolate sponge. The mousse itself was smooth, if a bit heavy. The cake just dissolved in the mouth and didn’t really add anything to the dish. Greedy Girl couldn’t really discern any caramelised banana but the ice-cream was OK.

Madame Lapine took the selection of sorbet made from ‘seasonal fruits and botanicals’. One was, apparently, mulberry and this was a very strong flavour. This was served with some crunchy pistachios which were very enjoyable. 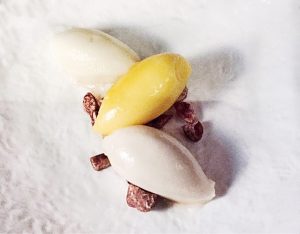 Given we’d already brought a glass of wine from the bar into the restaurant, we opted to have our included sparkling wine last. The staff poured us two glasses of a Markview brut cuvee by McWilliams, from New South Wales. This is a very inexpensive sparkling made from the usual chardonnay/pinot noir blend. It was pretty unremarkable.

And we were done. We’d enjoyed the view (no pictures, because the reflection from the lights at the back of the restaurant doesn’t help there) and the food was OK, without being startling in any way.

At the price point, it was reasonable value, but there’s a lot of competition for fine dining in Sydney. It has to be said though that this is definitely dinner with a view, with the most exciting thing being the latter rather than the former.

Altitude at the Shangri-La