It’s been a while since we’ve flown on the massive A380, a brilliant flight with Qatar from Paris to Doha in the very comfy business class seats. Not being able to justify business class for a seven-hour daylight flight, this was our chance to try out the Qantas A380 economy seats.

Who’d run an airline? Weather, technical issues, crabby passengers – there’s nothing like a delay to start a round of wholesale eye-rolling and dark utterances. While it looked as though we’d have a shot at on-time boarding and departure, those hopes were dashed when the catering was taking its sweet time to load the giant plane. Simply, there were too many open doors. Not that you’d want to take a swandive from this giant plane.

Happily though, we were in one of a handful of rows of economy on the upper deck. 32A and B is the first row of economy, behind the business and premium economy cabins. It’s a bulkhead seat with amazing leg room and, unlike the configuration on the lower deck, it’s 2-4-2 (3-4-3 downstairs).

So off we trundled, leaving the bulk of the passengers to wait for catering to finish, as we took the upper ramp. 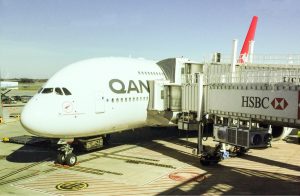 We took the high road …

The only downside of these economy seats is that they are at the tail of the plane, making the journey somewhat bumpy. Ne’er mind. The leg room and the large storage bin next to the window seat were both brilliant. 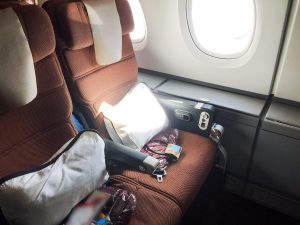 Our spot for the next seven and a half hours

The flight took off 17 minutes later than the advertised departure time. On a day of fierce winds in Melbourne even this huge machine was buffeted around for much of the first hour.

Our track took us up past Broken Hill, heading across to Darwin and up over Indonesia into Singapore. Being bulkhead seats, we had retractable in-flight entertainment screens. The selection of movies and TV shows is pretty good. Of course, there was one movie that absolutely had to be watched. Surely you must be joking? 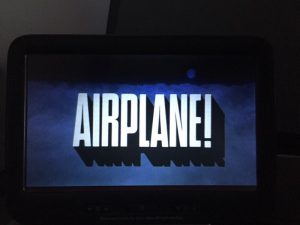 There are some additional little perks to being on the upper deck. Given premium economy was virtually deserted, we in the cheap seats were offered the PE amenity pack. This is seriously basic – eyeshade, socks and tooth care. Still, they didn’t have to hand these out … 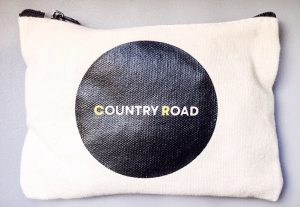 And shortly thereafter, the menu arrived. 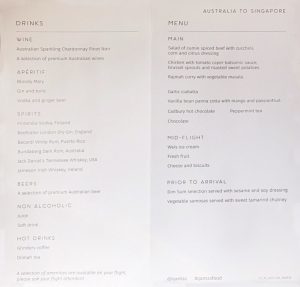 Lunch service started as soon as the seatbelt sign was turned off. We took the chicken and the vegetable curry. The chicken had a tangy tomato sauce and it was quite tender. The brussels sprouts and sweet potato cubes didn’t go with it at all. The bread roll was hot and liberally stuffed with a garlic butter. Quite decent. The mango and passionfruit pannacotta for dessert was very sweet. 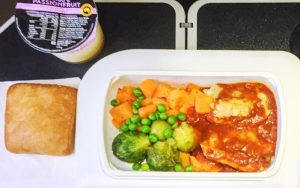 The vegetable curry was also edible. Not sure, despite the promotion of #qantasfood on the menu that either dish was particularly instaworthy. 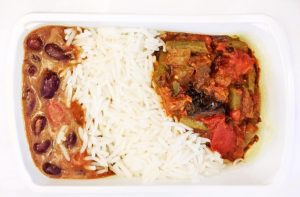 There’s a reasonable booze selection and alcoholic beverages are complimentary in economy on Qantas. A particular highlight is the bloody mary mix, served with a slug of vodka.

And so we wended our way north-west. The flight attendants regularly passed through the cabin, offering a very yummy hot chocolate with marshmallows, fruit, biscuits, chocolates and water. An hour and a half before landing, we had the second hot meal – both opting for the dim sum box with a sesame dressing. 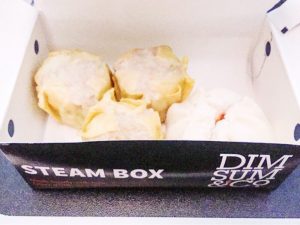 We arrived in Singapore 44 minutes behind schedule and the race was on to get off the plane (again, a separate aerobridge for the upper deck), through immigration, into the taxi queue and to the hotel in time for happy hour. We made it with five minutes to spare – helped immeasurably by having only hand luggage.

The flight felt quite long but not liking lumps and bumps made it a little tricky to relax and settle. Still, it’s an easy trip. It would be interesting to see the on-time performance figures for this service, although it has only recently returned to using A380s, with Qantas now using Singapore as its hub into Europe, rather than Dubai.

The photo at the top of this post is courtesy of the Oneworld image gallery.