From afar, when planning this trip, it seemed a bit of an ask to find Thanksgiving lunch in New York City. We’d been told by several people in the industry that Thanksgiving is a day for family get togethers, so don’t bother looking for fine dining options.

But on arrival in Manhattan, we were struck by how many eateries – at varying price points – were open on Turkey Day. We were all set; we’d jumped on a booking at the two Michelin-starred Jean-Georges at Columbus Circle.

On a fearsomely cold day in the city, the light, bright and slightly sunny dining room at 1 Central Park West was a welcome sight.

Having peeled off several layers of clothing, we were shown to a mini-booth along the wall opposite the windows, where both of us could cosy up on a banquette. Some people could consider it a hideous table, feeling somewhat shut away, but it was perfect for us.

Settling in, we were able to observe most of the dining floor and protected from the noise that steadily built throughout the day.

For Thanksgiving 2018, there is one set menu for $US198 per person. Within that there is room to accommodate dietary requirements or allergies, but essentially you can choose an option per course.

Generally Greedy Girl and gluttonous husband sample the whole menu, each taking an option. Not this time, as some dishes were too enticing to pass up. But more on that later.

Having not sampled a huge amount of champagne throughout our South American tour, we were determined to share a bottle here. We chose a multi-vintage Billecart-Salmon, bottled specifically for the restaurant. It was dry and delicious. 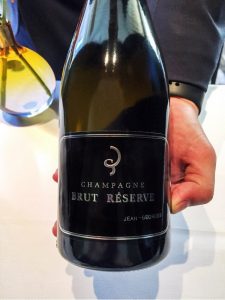 And so our Thanksgiving odyssey began. Before the menu proper started, we were brought an amuse bouche. 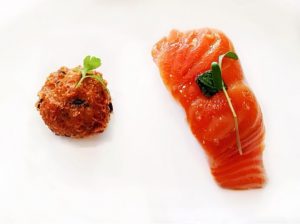 This was delectable Tasmanian trout served with crunchy sushi rice with a chipotle sauce, plus a little bonbon with black truffle and cheese. Greedy Girl would like a dozen of the bonbons to go, stat …

Any sauce remnants were mopped up by the bread selection – most notably a very good sourdough, although the black olive and rosemary foccacia was also exceptionally tasty.

In the glass is a warm parsnip soup. This was delivered to surrounding tables in a variety of champagne flutes. We just happened to be unlucky enough to get this shape. The soup was so thick, the glass needed to be turned 180 degrees to start the flow.

Given it was quite delicious, we contorted ourselves to try to get it out of the glass. No word as yet on whether chiropractic was included in the menu price.

And so to the menu proper. The starters consisted of foie gras or tuna. Hah. While Greedy Girl loves tuna, on a cold NYC day, the prospect of seared Hudson Valley foie gras won hands down.

As you can see from the picture at the top of this post, the foie gras was beautifully seared and served with a soy and yuzu emulsion, plus frozen green apple that was spooned over at the table. OMG. This was seriously delish. The crunch from the frozen green apple was divine.

Well primed, we awaited the fish course. Greedy Girl got to choose the lobster. 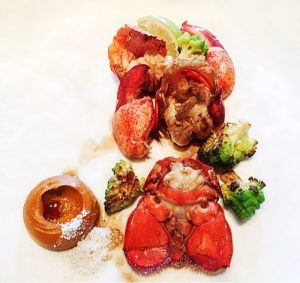 This is Maine lobster served with Romanesco cauliflower, a hibiscus romesco sauce and fresh lime. It’s a very generous serving. Greedy Girl tried all the elements together and enjoyed them, but the star here is obviously the lobster – sweet, soft, delectable.

Gluttonous husband took black sea bass crusted with nuts and seeds, with a sweet and sour jus – more like a broth. 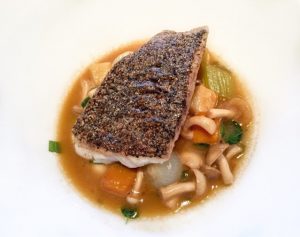 The fish was perfectly cooked, if a little bland. The crust didn’t impart much flavour. The broth had a number of interesting elements, particularly the mushrooms and some fennel. It was perfectly edible, if not a rave.

It was time for the dish that exemplifies Thanksgiving – Turkey. Gluttonous husband decided to forgo the other option of a wagyu beef tenderloin to also have the organic turkey with a chestnut and foie gras stuffing and jus. 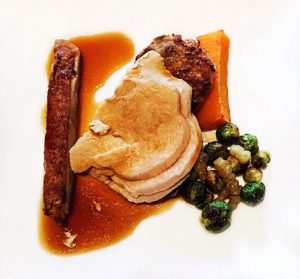 It was served with sweet potato, a blood-orange cranberry sauce and caramelised brussels sprouts and ‘crosne’, a type of tuber.

The turkey breast was sublime – beautifully moist and soft and full of flavour. The darker meat in the strip on the side, topped with crunchy skin was also quite nice.

Greedy Girl tried the sprouts, even though she’s never been a fan. They were OK, still too bitter for her palate, but the crosne was quite inoffensive.

Time for sweets. Gluttonous husband decided to get into the spirit of the season with the pumpkin dessert. 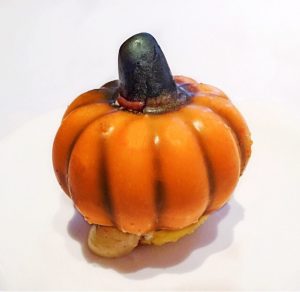 This is spiced pumpkin cream with a gingerbread cookie inside, and butternut squash sorbet. It tests positive to cinnamon.

A clever-looking dessert, gluttonous husband also liked the flavour combination. He was instructed (after pictures were taken, naturally) to tap the pumpkin with his spoon to shatter the coating, which was rather satisfying.

It was quite a feat of culinary expertise because it’s clearly quite fragile. A family at a nearby table with rugrat in tow tried to get a celebratory group photo with the desserts but Little Miss decided to bring her palm down on top of the Great Pumpkin and it immediately went ‘splat’. C’est la vie … 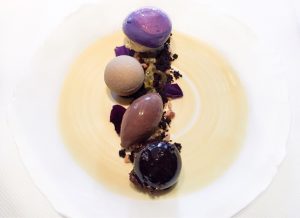 And we were done – or so we thought. With our US$8 espressos (a shame this wasn’t included as part of the tasting menu but …) we were given a little stand of petits fours. 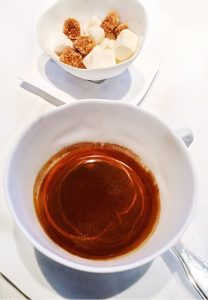 A decent, if expensive, espresso 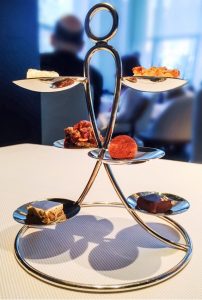 We were caught at a low ebb with the coffee. Given all our coffee haunts in Midtown were closed for Thanksgiving, we’d resorted to asking for our morning espressos in the hotel, which offers free ‘coffee’ until 10am.

The first sign of trouble then, when we wandered into the bar to ask for coffee, was being directed to the free filter stuff (Greedy Girl is too polite to write crap) and when we pointed to the espresso machine being told we wanted ‘caffe’. Ummmm, yes. Quite.

Compared to some of the warm beverages we’ve endured this trip (particularly in South America – all the more disappointing for a continent that has given coffee to the world) this wasn’t the worst coffee we’d had, but you could see it from there … Sigh.

So the prospect of a decent coffee on Thanksgiving was too tempting. This was OK but highway robbery for the price. Oh well.

The petits fours were OK. There was a nice nougat, a sesame and tahiti chocolate, a truffle, mini pecan and apple pies and a marshmallow.

And that was definitely over and out. We paid the check and headed into the frigid Manhattan afternoon.

The fine dining room at Jean-Georges is quite beautiful. While we were happy with the table, we were fairly sure it was perhaps one of the less coveted spots in the establishment, feeling a bit hidden away.

We were grateful (it was Thanksgiving after all) that the restaurant was open and we could enjoy a decent feed on this most American of holidays, but the service was quite lacklustre.

Usually, no matter the total on the bill, we’re happy to pay for service in US restaurants but gluttonous husband had to be cajoled to leave a tip on this occasion. The service, apart from their ready acquiesence to allow us to finish our champagne before desserts were served, was somewhat underwhelming.

As is our usual approach, we tried to engage with the staff but apart from a couple of little breaks through the ice, they remained somewhat distant and not outrageously attentive.

Anyway, we’re glad to have ticked the two Michelin-starred Jean-Georges and the famous Alsatian chef Jean-Georges Vongerichten off our fine dining list. It’s unlikely we’d go out of our way to try more.