Where to eat in Lima – Astrid y Gaston

Gaston Acurio is, arguably, Peru’s original celebrity chef, so when deciding where to eat in Lima, there was an obvious choice – Astrid y Gaston.

While the restaurant, in the well-heeled Lima suburb of San Isidro, has fallen down the list of the world’s best restaurants in recent years there’s no appreciable reason as to why. However, it may well be because of the emergence of newer players in this vibrant dining scene.

But there’s no doubt, Astrid y Gaston is a restaurant that knows what fine dining and great eating is all about. The chef himself ‘came out of retirement’ in recent years to again helm the restaurant and his German wife Astrid Gutsche is the pastry chef.

On a recent Saturday lunchtime, we snagged a table in the light-filled atrium that abuts the glassed-in kitchen. It’s a quirky space, with upside down potted plants covering the ceiling. It’s one of Lima’s historical buildings in true hacienda style, with a number of indoor and outdoor dining spaces. The restaurant moved here in 2014.

We immediately opted for the tasting menu that showcases the myriad inputs on Peruvian cuisine, particularly in Lima – produce from the Andes, Spanish, African and Arabian influences and, of course, Japanese and Chinese.

There are 13 courses and the pace, initially is frenetic. We had to ask to slow down a fraction, but we’re getting ahead of ourselves.

Not feeling as though we had a wine pairing in us, we opted for a bottle of bubbles. We chose a Franciacorta –  a San Cristoforo Millesimato Brut which apparently is only made during the ‘better years’. It was beautifully dry and an excellent wine for the journey.

It’s worth noting that champagne seems inordinately expensive in South America and Lima is no exception. The Franciacorta was markedly cheaper than any of the champagnes, but still came in at around A$170 a bottle.

And so we dived into the food. The presentation here is at times quirky and always vibrant. Everything looks fantastic.

First up is a ceramic bed with three little nibbles nestled on it. We were instructed to eat each of these in one bite as they were potentially messy. 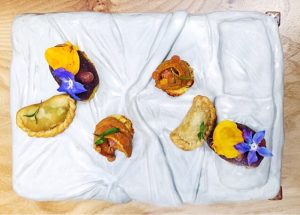 Make your own bed …

We tucked into a beautifully light fish empanada, a blue potato stuffed with lamb and a dollop of incredibly light sea urchin on toast. All delish.

The next course showcases Andean rivers – a river shrimp with a tangy avocado and what tasted like wasabi sauce, topped with frozen apple. 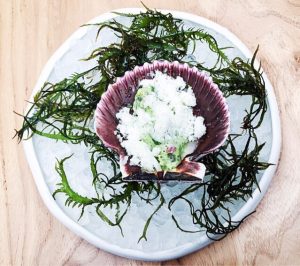 It seemed a bit odd to present this in a scallop shell but it was utterly delectable. The shrimp pulled apart with the greatest of ease. Yum.

Next up it was time for some ceviche – or cebiche. Maybe it depends which side of the Andes you’re from. This incredibly vibrant bowl featured sea bass with what was termed ‘tiger milk’ and sweet potato. The broth had plenty of heat but wasn’t overpowering. Another great dish. 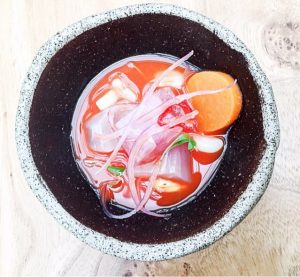 You say ceviche, I say cebiche …

We then moved to a tiradito, a Peruvian raw fish dish (pictured at the top of this post). An incredibly pretty plate of food, this featured scallop with a range of accompaniments, including some Sichuan influences. Stunning.

The next dish also had Chinese overtones. It was visually stunning, incredibly clever and utterly delicious – according to the wait staff it was pork in the style of Peking duck although perhaps there was a Lost In Translation moment.

Greedy Girl believes the meat is actually guinea pig, sitting atop the black disk (which is the pancake) and the meat is topped with delicate slices of radish. OMG. This is worth the price of admission alone. 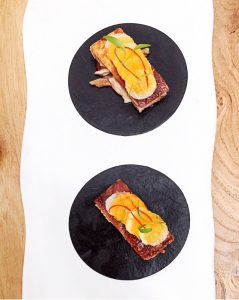 It was at this point, a bread basket and selection of toppings arrived at the table. The vibrancy is incredible. 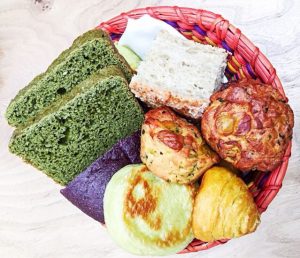 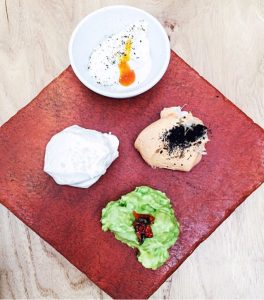 Nikkei cuisine is a huge part of Lima’s culinary traditions. The next dish is described as showcasing the Okinawan heritage – a lightly spiced wagyu beef dumpling. Yum. 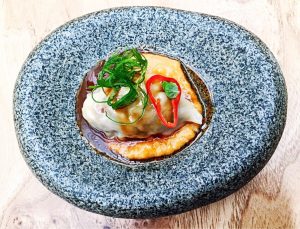 It was time for more river shrimp, this time with lima beans, a ‘chupin’ sauce (the reddish/orange splotch you can see below) and menestron emulsion, with crispy edible seaweed. 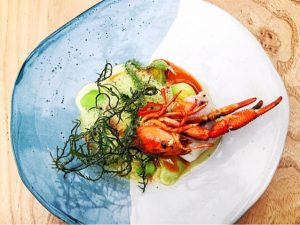 All the elements of this dish enhance the incredible sweetness of the shrimp. The seaweed was a little hard for Greedy Girl’s palate, but the dish was fresh, light and very enjoyable.

It was time for some meat. First up was rabbit in a Lima curry, with fresh coconut and a side dish of quinoa. 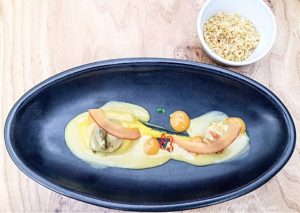 The rabbit was soft and full of flavour, and the curry packed a punch. Another very clever dish.

Heavier meats followed. First was a beef tongue skewer with caramelised ‘arracacha’ (a root vegetable) and picanteria sauces. The flavour here is intense. Greedy Girl was happy to try it but passed the rest of the plate to gluttonous husband. 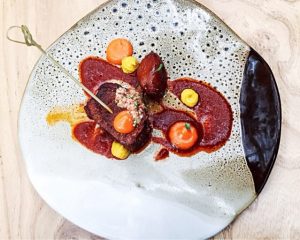 Finally, we had a roast short rib stew with smoked rice. Again, the flavour was enjoyable but Greedy Girl isn’t fond of the texture of stewed meats. The rice was absolutely delicious. 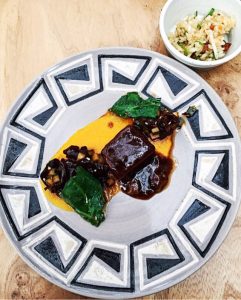 Whew! It was a power of food and we had three desserts to come. First up was ‘chicherito’. 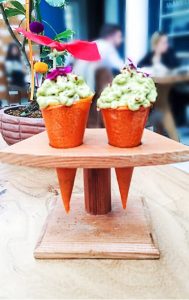 This is a chicha de jora sorbet (made from corn, which is not exactly unusual in Peru) with coca, quinoa and tamarillo. It’s light and refreshing – a good start.

It’s followed by ‘La Papa’ a homage to the potato – another big deal in Peru. Here’s how it arrives at the table … 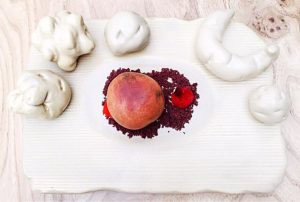 The mouldings on the plate are supposed to represent various potato varieties. It’s possibly the most unattractive-looking plate (in terms of ceramics) Greedy Girl has ever seen, reminding her of, well, things one shouldn’t be reminded of while eating.

The dessert, however, was very nice. Here’s what happens when you tap it with your spoon … 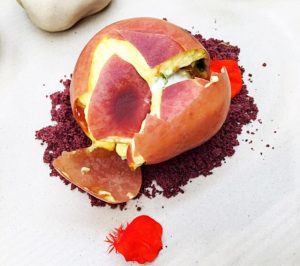 So, this is a combination of potato, saffron, cumquat, honey, huacatay (a type of South American marigold), manjar blanco (blancmange) and porcon (pine) mushrooms. It was an interesting and quite enjoyable combination. 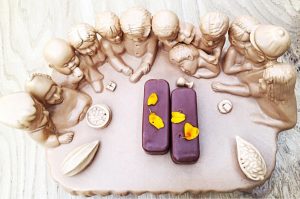 And we were done. We asked for ‘la cuenta’ and prepared to head out to where our very patient driver was waiting.

The restaurant ranked 39 on the 2018 list of the World’s 50 Best Restaurants, while newer Lima establishments like Central and Maido took spots in the top 10.

There’s no doubt at all that this is hugely accomplished, interesting and enjoyable cooking. It’s also a much easier reservation to get if you have limited time in Lima. Don’t miss it. 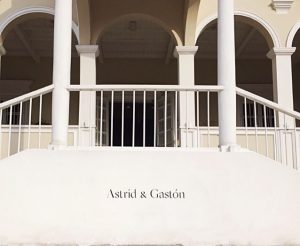 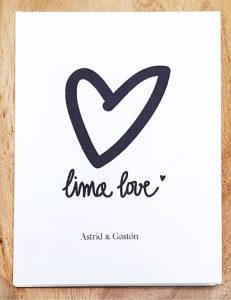