In the Gramercy/Flatiron district of New York City, Cosme has made a big impact on NYC’s dining scene, coming in at #25 on the 2018 list of the World’s 50 Best Restaurants.

The restaurant opened in 2014 and is the first establishment for noted Mexican chef Enrique Olvera outside his homeland. Like most major US cities, there’s no shortage of Mexican food in NYC but this is a step beyond the mundane.

Olvera and his fellow chef Daniela Soto-Innes elevate Mexican classics to a new level of refinement. It’s not fine dining; Olvera calls it modern Mexican food, presented in an understated and refined way.

On a very cool lunchtime recently, we headed for East 21st Street (between 5th and Park) and into a dark and moody interior. The initial space is dominated by a long bar, with the dining area at the rear. 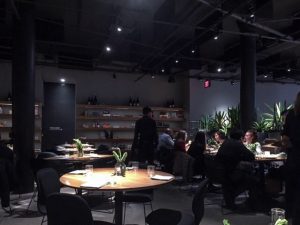 A dark and dramatic interior

The menu here is by no means exhaustive. This lunchtime we had 13 dishes to choose from and quickly settled on four. Gluttonous husband ordered a beer and Greedy Girl, as is her wont, took the house margarita. 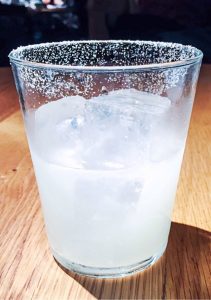 This is made with Cimarron Blanco tequila, Combier (triple sec) and lime. At US$18 it’s eye-wateringly expensive but it was truly magnificent.

And so, we settled in. It wasn’t long before our first dish appeared, the absolutely extraordinary herby guacamole, pictured at the top of this post.

The addition of the fresh herbs was inspired. It just lifted the guacamole to a heightened level of enjoyment which is weird, because there was a significant amount of mint, which Greedy Girl doesn’t usually like.

Our other starter to share was a prawn tostada with avocado and chipotle meco (a particular species of chilli pepper). 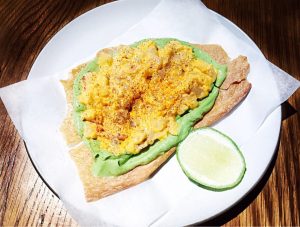 OMG. This is absolutely delicious. The level of spice is perfect for the prawns, giving a delightful hit of warmth without overpowering the flavour.

We then moved to some heavier dishes. Greedy Girl is reluctant to say larger plates because they volume of food isn’t hugely increased. 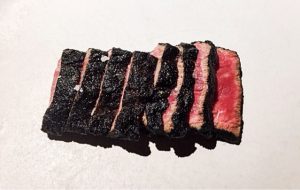 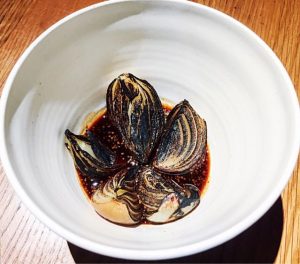 As a dish, it possibly doesn’t get much simpler than this. The steak was beautifully seared and flecked with a few flakes of salt. The onions had what appeared to be a stock-based sauce with them, but neither had much wow flavour. It was perfectly edible but not particularly memorable. 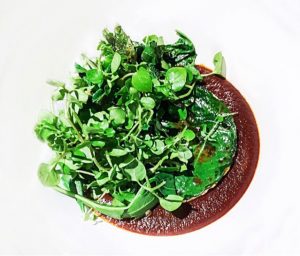 Apart from the profusion of herbs (mainly a Mexican variety, hoja santa) on top, this also had ricotta and queso fresco. Texturally it wasn’t quite what gluttonous husband was looking for and he described it as ‘unexciting’.

So our ‘main’ plates didn’t live up to the promise of the starters, which was a shame. Still, we decided to linger and try a dessert.

This is a warm pecan tart with salt and pepper ice-cream. 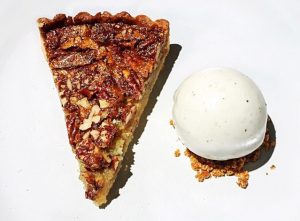 All praise to the pastry chef. This was absolutely stunning. Greedy Girl isn’t an ice cream fan but this was a perfect foil for the buttery lusciousness of the tart. Worth the price of admission alone.

Cosme isn’t a restaurant for everyone; there’s been a fair amount of criticism online for the portion sizes but it’s certainly interesting and inventive food. If we had a chance to return, we’d probably opt for more smaller plates which seemed to be executed better.