To celebrate International Pisco Sour Day, observed around the world on the first Saturday of February, The Foodie World brings you our favourite recipe for this delicious South American cocktail.

We first tried a Pisco Sour on Easter Island – Chilean culture is strong there and, with it, pretty much every bar and restaurant on Rapa Nui offers them.

So, what is Pisco? It’s a grape brandy that both Chile and Peru claim as their own. If there are differences in the distillation from country to country, Greedy Girl couldn’t discern them, suffice to say it’s a rather potent potable (the variety we use here in Australia is 41.3% alcohol).

It’s not particularly easy to find outside of South America (in terms of buying Pisco for your home bar, that is). One of the biggest booze retailers in Australia is Dan Murphy’s and that’s where we found this Peruvian Pisco, called Barsol.

But you may need to seek it out yourself – we asked the staff at two outlets where it was in the store and they’d never heard of it.

So, here we’re intending to shatter one of the better kept cocktail secrets. This is a sensational blend of sourness and sweetness and hugely refreshing on a warm day.

This recipe for Pisco Sour is a combination of two others we found and a few twists. Essentially, it’s Pisco, fresh lime juice, simple syrup, egg white and bitters, but we’ve tinkered with the ratios. The recipe nominally gives you four cocktails but we’ve found it easily provides six and we recommend chilling your cocktail glasses first.

Here goes – we enjoyed our Pisco Sours with some pan roasted macadamia nuts with rosemary and salt, and a wedge of truffled brie. Enjoy! 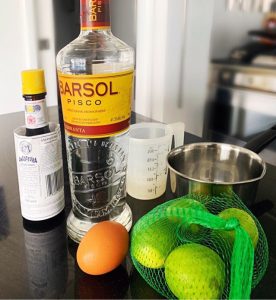 Create the simple syrup using 75mls of water plus 50mls of caster sugar (just put the sugar into a measuring cup). Warm to dissolve the sugar and set aside to cool slightly, but you still want it warm when you combine with the other ingredients. Traditionally simple syrup is equal parts water and sugar but we think slightly less sugar gives a better balance to the finished cocktail.

Microwave the limes for 15 seconds to maximise the juice you get from them. On average it takes three to four limes to get your half cup of juice.

Separate the egg to have one egg white (you can use the yolk later if you’re making mayonnaise, or as an egg wash – don’t waste it).

Combine the Pisco, lime juice, simple syrup and ice blocks in a blender and pulse to crush the ice. Add the egg white at the end and pulse again for around 30 seconds.

Pour into your chilled cocktail glasses and pour three dots of bitters on top. 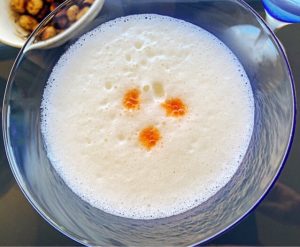 And enjoy! You can refill the same glass (you may not need any extra bitters), just keep the blender jug in the fridge and give it a pulse before you pour again.