Lunch with a view in Melbourne – Lui Bar

Let’s face it, when it comes to Australian cityscapes, Sydney gets all the kudos. But when you’re looking for lunch with a view in Melbourne, there are some spectacular options.

We headed to the 55th floor of the Rialto Building, once the tallest office building in the Southern Hemisphere. While other skyscrapers have since claimed that title, it’s still a pretty special spot for lovers of food, wine and views.

An early birthday lunch for foodie friend Ishtar, we opted for the business lunch at the Lui Bar – this is a large space with huge windows looking south, east and west, and over Melbourne’s Port Phillip Bay.

You have a bird’s eye view of the south bank of the Yarra River, all the way along to the sporting precinct (including the MCG) in the east, and the southern end of Docklands – as well as the water.

It’s an incredibly pleasant place to while away a few hours, with a cocktail or bottle of something nice and some world-class snacks, thanks to its shared kitchen with long-established Melbourne fine diner Vue de Monde.

The business lunch, on face value, seems a little expensive at A$90 for three courses (and not including any drinks) but we enjoyed stellar food in comfort and quiet on a recent Friday.

While Ishtar settled in with a glass of white, Greedy Girl had a mocktail. For most of our first hour (the bar opens at 11.30am and doesn’t take reservations) we had the place to ourselves, sipping, chatting and taking in the decidedly delightful vista over the bay and Melbourne’s southern suburbs.

The business lunch is a three-course set menu with a few choices of main plate. It’s designed to showcase sensational local produce as well as some of the time-honoured dishes from Vue de Monde – but more on that later.

Our first course was a Sydney rock oyster (a small, sweet variety) served alongside a small bowl of crab meat and broth. 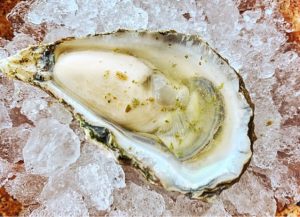 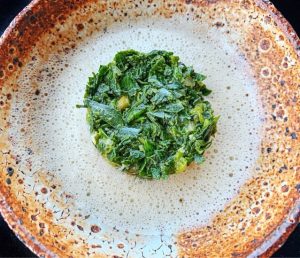 Ishtar was a very happy girl – she got two oysters (fresh oysters being one of the few things Greedy Girl doesn’t eat). She relished both and we then attacked the very light broth and dismantled the fresh shredded crab meat topped with an onion and herby disc.

This was served with some charcoal-seared flat breads. These were utterly delicious and perfect to mop up every last skerrick in the soup bowls. 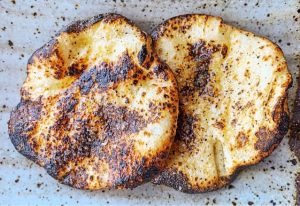 It was time for main courses. Ishtar took the duck breast, served with beetroot and Muntrie berries – a ‘bush tucker’ element. These are native to the south coast of Australia and also known as native cranberries or, less prosaically, ‘emu apples’. 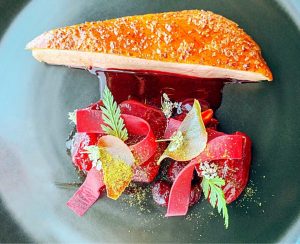 The duck was soft perfection and went brilliantly with the accompaniments. Ishtar was exceptionally pleased and chose a glass of pinot noir to wash it down.

Greedy Girl took the dish pictured at the top of this post, described rather economically on the menu as ‘fish, asparagus, celeriac and kale’.

What a combination! The fish was pan-seared barramundi. Now, if you’re a fish lover and you’ve never had ‘barra’ jump a plane to Australia or south-east Asia immediately. It’s the king of white fish with a beautifully mild and sweet flavour, enhanced enormously if you get it with perfectly crisp skin – as this was.

Everything worked together in this dish. Stunning to look at and totally enjoyable to eat. The fish was cooked perfectly and while the serving size was perhaps a little on the small size, it was more than enough for lunch.

And so we arrived at the final course. While Vue de Monde now showcases a lot of native produce, its heritage remains steadfastly French. A signature dish through all its years of operation (in various locations around Melbourne) is its chocolate souffle.

OMG. It doesn’t get much better than this. 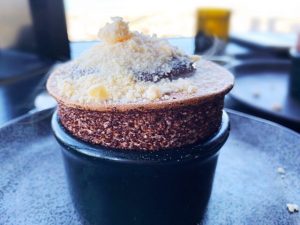 It’s an intensely chocolatey flavour, topped with a hot chocolate sauce and some liquid-nitrogen frozen milk crystals spooned over at the table that give an eerie, other-worldly plume of vapour.

Every last crumb was consumed of this incredibly light yet totally decadent dessert.

After a coffee, and a celebratory lamington presented to Ishtar in honour of her birthday, we were done. We’d enjoyed a feast, a great chat in a quiet environment and felt very satisfied.

Lui Bar is definitely a place to take visitors to Melbourne. It’s a great view with excellent food (the snack menu is also worth a look) and some very interesting drinks. It’s not a particularly inexpensive spot (especially to drink cocktails) but if you’re looking for a quintessential Melbourne experience to impress, you should definitely put it on your list.