The scene for craft beer in Paris has exploded. Not too many years ago, it was almost impossible for beer drinkers to get something out of the ordinary here.

So, fuelled by gluttonous husband’s love of India Pale Ales (known fairly universally through Europe as ‘ee-pahs’ although the more serious vendors here do use the initials in English), we sought out a number of craft or artisanal beer options in the City of Lights.

We headed for this quirky brewery overlooking the Bassin de la Villette, on the Quai de la Loire – an area hugging Paris’ 10th, 18th and 19th arrondissments in the north-east of the city.

It’s an extraordinary spot, with a large outdoor patio on the water, plus some undercover exterior seating and a fairly big main hall inside abutting the bar and the brewery tanks. 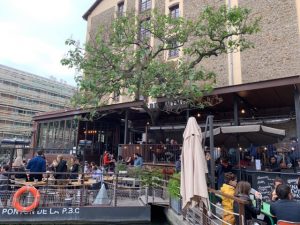 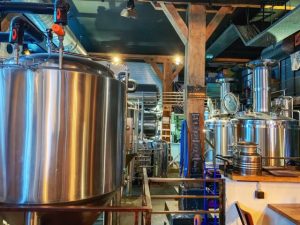 Vats at the rear

Our visit was on Mother’s Day in Paris and families of all persuasions were out in force. We still managed to find a table and settled in for a couple of craft beers. Many on tap had sold out by the time we arrived (late-ish afternoon) but were still available by bottle.

Gluttonous husband opted first for a ‘Bete Noire’ black IPA, featuring black malts and smoked hops. He was surprised that it was actually quite light tasting. It was lightly bitter and quite hoppy but he described it as fairly one-dimensional. 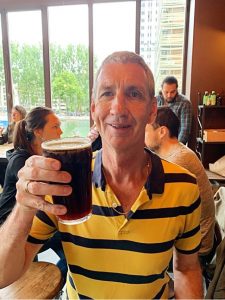 Second up, he took a bottle of Le Barge Du Canal which he described as more of a traditional IPA with a citrus flavour and a bitter finish.

It was unusual to have the dark beer first but he was happy that’s how the afternoon transpired. 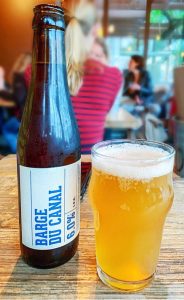 Our preferred beers – Brexiteer on the right

Greedy Girl took an unusual choice for her – a ‘Brexiteer’. This was described as ‘blonde’, ‘tropical fruits’ and ‘trouble’. It was a very cloudy beer, described as a ‘New England IPA’ but it didn’t have a very strong bitter taste at all – a flavour Greedy Girl doesn’t really warm to.

The brewery also offers a wide range of wines (this is France, after all) and cocktails, as well as a decent food selection. A hugely fun place to while away an afternoon – or beyond; the brewery is open until 2am.

Without a tattoo, facial hair or a beret, Greedy Girl wasn’t sure she was going to gain admission to this little bar in the 2nd arrondissement.

This is a serious spot for beer lovers. There are 12 craft brews on tap at any one time and the place, from early evening, is jumping with blokes propping up the bar or taking one of the few tables in the front part of the building. There’s also a larger room down the back which, by 7pm was close to full. 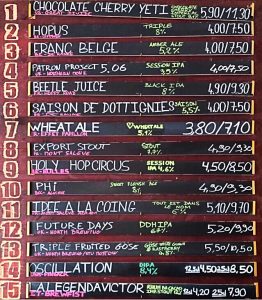 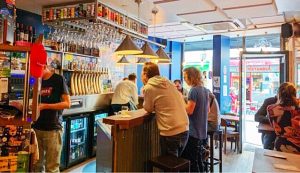 With Jimi Hendrix belting out on the sound system, we settled in with a wheat beer for Greedy Girl and a number 12 for gluttonous husband.

The wheat beer was slightly citrusy and easy to drink. The Future Days UK IPA was quite cloudy and a little bit heavy, but with a nice citrus cut through and a slight bitter finish. 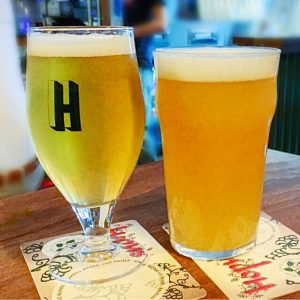 We moved on. Greedy Girl tried another two brews, the Franc Belge and the Triple Fruited Gose (the bartenders are very happy to give you a small taste) but both didn’t sit well on the palate. She went with another wheat beer.

Gluttonous husband moved to a US IPA, which the barman told him needed to be a 25cl glass (rather than his customary 50cl or pint), saying it was both expensive and very heavy. It was roughly double the cost of other beers on tap. 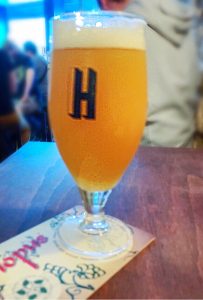 A very heavy IPA – Oscillation from the US

And he was right. Gluttonous husband thoroughly enjoyed the beer, describing it as a nice, not overly strong bitter flavour but said the beer really felt like it was weighing him down. By alcohol it wasn’t anywhere near the strongest IPA he’s ever drunk but he said he was grateful for the advice to have a smaller glass, saying it was probably the most intense IPA he’s ever drunk.

Another way of describing it – he says it’s the Greek coffee of IPAs. You could stand a spoon up in Greek coffee, this one felt just as thick and unctuous in the mouth.

The bartenders were kind enough to put a snack on our table and we kept those good vibrations until we tried it. Worst bar snack ever. We think they were sunflower seeds but they were pretty awful. C’est la vie. 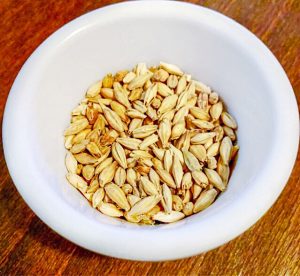 There is a small range of food available after 7pm, but when we left well after that time no-one had ordered any. 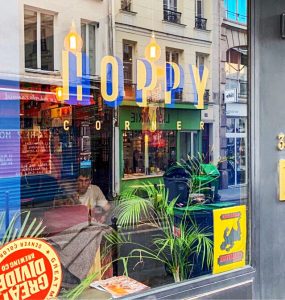 In the shadows of Sacre Coeur in the 9th arrondissement, this beer shop-cum-bar is a great local hangout. It’s literally wall-to-wall bottled and canned beers from around the world, plus a few available on tap.

There’s actually a bit of seating inside – some high chairs in the window, a long table in the front of the shop and a few tables behind the cash register.

Staff members are very knowledgeable – you can tell them the characteristics you like in a beer and they’ll come up with recommendations.

First up for gluttonous husband was ‘Plan Citra’ a standard IPA with a decidedly citrus tang and bitter notes at the end. Light and easy to drink.

Greedy Girl had a Deck and Donohue Trouble #6. A Parisian interpretation of a traditional farmhouse ale, it’s said to be brewed from four grains. It was also very easy to drink. 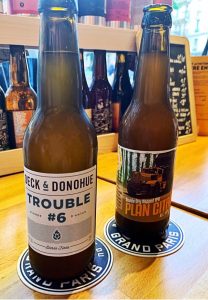 Here’s trouble … and its friends

We were having loads of fun looking at the different brews for sale and this one in particular caught gluttonous husband’s eye. We offer it here without further comment, other to say it’s another Parisian beer. 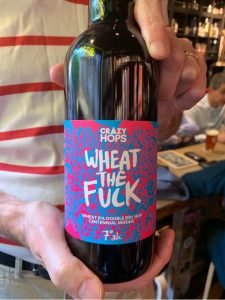 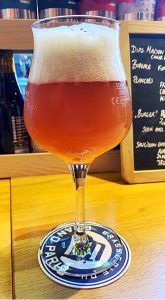 This was 8% alcohol – a similar content to the Oscillation brew at Hoppy Corner but felt nowhere near as heavy. Possibly the most bitter IPA he’s ever had, he thought it was still quite easy drinking. 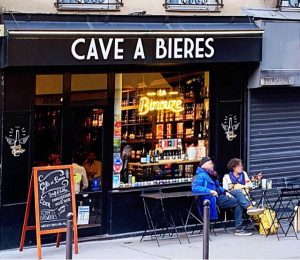 This branch is open every day from around noon. There’s another branch called ‘Paradis’ in the 10th arrondissement which we visited on our final night in Paris this trip.

It’s a much smaller space with five craft beers on tap at any one time. Greedy Girl chose a Paris-brewed ‘O’Clock’ Saison which the bartender described as a ‘classic easy drinking beer’. He was right. Initially there was quite a sweet, almost a honey finish. Delightful.

Gluttonous husband’s final ‘pression’ beer was an IPA from Spain. 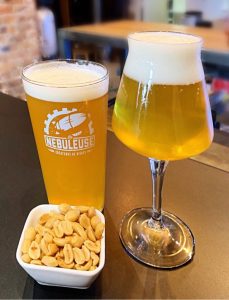 This was quite light but extremely bitter. A ‘Laugar/Ostadar’ international IPA, it was easy drinking but a fairly standard hoppy beer.

The bartender asked if we knew anything about IBUs. We didn’t. Apparently it stands for ‘International Bitterness Units’ and the scale is zero to 100. This one came in at 115. Okey dokey.

For his second round, gluttonous husband tried a Double IPA from Nottingham in the UK. 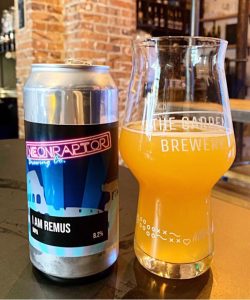 Neon Raptor ‘I Am Remus’

Initially he drank it from the can (like a good Aussie) but decided to see how cloudy it was. As you can see, it was rather full on in terms of colour but also gave out a number of new aromas.

He felt it had an apricot or stone fruit flavour and was far less bitter than the first one. It was again easy to drink but a scary alcohol content of 8.2%.

This is a completely happening place after work as you can see from the hordes spilling out the front. 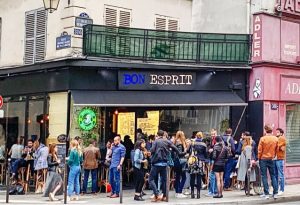 We were lucky enough to get a spot up at the bar, even though (once again) we had absolutely no hipster credentials to be in there. Gluttonous husband took the Hazy Jane New England IPA, which was 7.2% alcohol, while Greedy Girl had the only lager on the list, a Poretti from Varese in Italy. Happy hour runs from 5pm until nine, so all good.

The bartender clearly liked gluttonous husband’s choice, putting it down in front of him with the words ‘here you go, sexy’. Okey dokey. 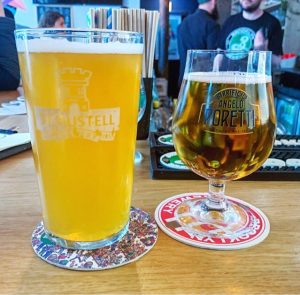 A sexy IPA for him, a bog standard lager for her

Gluttonous husband was on top of the world. This was a very easy drinking IPA despite the alcohol content. Unlike many of the other IPAs he’s had in Paris, there were no citrus undertones, just a very approachable bitter flavour.

Clearly our bar seats were only a suggestion as people continued to crowd in and reach over the top to get their brews. Still, gluttonous husband opted for a second, this time a Cloudy Job ‘Milkshake’ IPA. 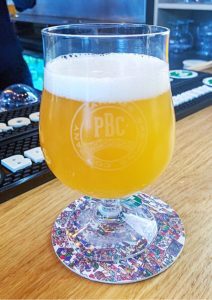 This was from a brewery in the Cornish town of St Austell and just under 6% alcohol. It definitely tasted lighter but still a nice, hoppy, bitter beer and one gluttonous husband said he’d be happy to quaff all day.

The music’s fun (if you can hear it over the roar of patrons) and the staff friendly and knowledgeable (and English speaking).

No website – open until 2am most days but closed Sundays.

This is a real neighbourhood haunt, with very friendly and knowledgeable people behind the bar.

Le Triangle brews three beers itself, has a small range of others on tap and a larger range of bottled beers.

Greedy Girl helped herself to a Pils – a ‘Blonde Legere’ by Parisian brewhouse Deck & Donohue (her second this trip from that brewer). A very easy drinking and light style.

Gluttonous husband first had the establishment’s own IPA. Talking to an American who’d had a pint of it earlier, the overriding sentiment is that the beer was very citrusy and the description on the menu talks about the influence of ‘yellow fruits’. However, gluttonous husband said it didn’t taste of citrus at all, with a long bitter finish. 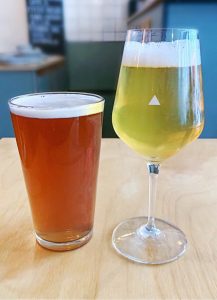 Next up for gluttonous husband was a Danish IPA done in New England style. 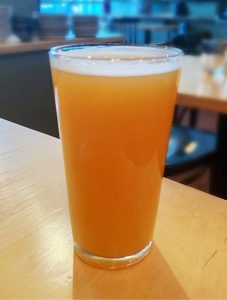 This was called ‘Geeked Up’ and had an intense aroma of stone fruits. Apparently the brewer, Gamma, has quite a reputation for producing IPAs in Denmark but is a relative newcomer to the scene.

Gluttonous husband said it wasn’t something he could drink quickly. The immediate reaction was to throw it down, but the finish was very long and quite heavy.

Le Triangle is also a brasserie with, from the crowd we saw piling in, is favoured in this area. You’ll find it in the 10th arrondissement, a street down from the Goncourt Metro station. 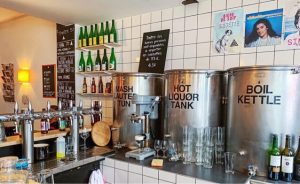 You can also order any of the beers on tap to take away – Le Triangle has a small canning machine but forget about bringing one home as a souvenir if you don’t live locally. The cans aren’t pasteurised so they’re only recommended for consumption within 24 hours.

This is a no-frills bar (described online as a beer hall) literally just down the road from the famed Moulin Rouge.

It’s very much a local haunt and there’s a couple of fellas skulking just inside the front door desperately sucking down on their e-ciggies.

There are quite a few IPA but, being in Paris, gluttonous husband chose the Paris IPA, while Greedy Girl took an Astroblonde pilsener. 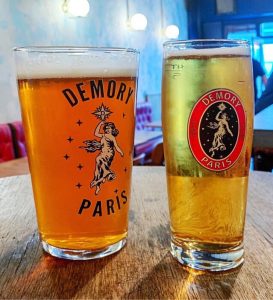 The IPA was OK. It had no real complexity but an easy to drink, light and bitter flavour but not particularly interesting. The same could be said for the pilsener. 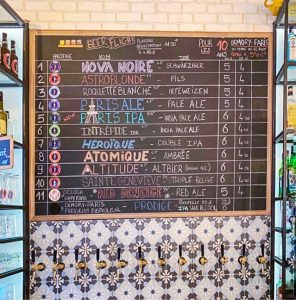 No website – open from 6pm most nights. Closed Sunday and Monday.