Where to find good coffee in Paris

Coffee in Paris, historically, hasn’t been the greatest. On her early trips to the City of Lights when Greedy Girl routinely drank cappuccino, the cost of a cuppa was astronomical. In those days, cafes would effectively charge you for two cups, claiming that a cappuccino was ‘double coffee’.

The standard coffee in Paris is an espresso, taken standing at a bar, with a fair old dose of sugar. So we decided to check out more ‘Australian’ style cafes around the city in the hope of finding a coffee in Paris that tastes more like home.

We’re told that the new style of cafe culture is now huge in Paris but the reality is that you still need to search these out – the traditional bar/cafe is much more ubiquitous.

For consistency of comparison, we ordered our standard double espresso and cortado (aka macchiato or piccolo) throughout but the cafes offer pretty much a full range of styles.

Wow! This is a find. Run by a barista from Adelaide, this is well and truly off the beaten track in terms of cafes, a block down from some of Paris’ most expensive fashion shops and a stone’s throw from the Presidential Palace.

It’s basically a little kiosk (as you can see from the picture at the top of this post), with a tiny indoor area – which was just as well because the heavens opened shortly after we ordered our coffee. Most people sit on little box seats out in the courtyard. 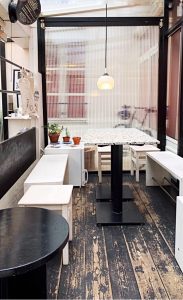 The tiny shelter against the storm

The coffee is sensational. Our friendly barista talks about the qualities of coffee in much the same way you’d have a conversation about wine. His care for the product is more than evident in the taste. And the best bit? Absolutely no more expensive than other coffees we’ve had in Paris. Do yourself a favour and head there on your next visit. 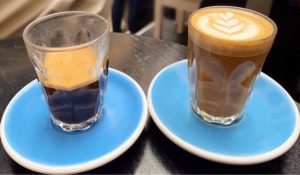 This is one small cafe in Paris’ 3rd arrondissement. Five people can perch inside, on low stools around a high bar, behind which the barista holds court. 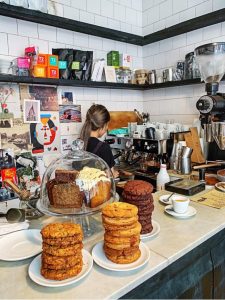 Where the magic happens

We were on our way to lunch, otherwise one of the very decadent-looking chocolate cookies would have found its way to Greedy Girl’s mitts …

The coffee was very good – the piccolo was robust and nutty while the double espresso had a reasonable amount of oomph, without hitting you between the eyes. 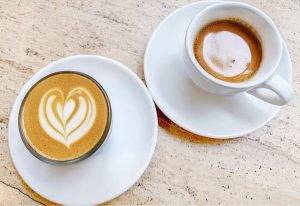 This is a real neighbourhood find. Just be aware though there’s a 10 euro minimum for the use of credit cards.

Just under a kilometre from Boot Cafe, also in the 3rd arrondissement, Loustic is a quirky-looking place with some wonderfully comfy banquette seats opposite the bar.

And that’s where we parked ourselves for another nutty coffee prepared by a British barista. He picked us out immediately and said we didn’t need to try out our fractured French on him. Zut alors! 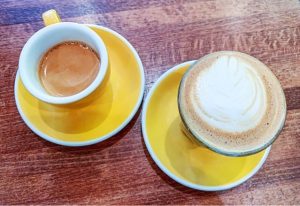 Anyhow, it was a very cosy spot to sit and even though the ‘latte art’ left a little to be desired, the coffee was quite enjoyable. Gluttonous husband commented he had a few citrus flavours coming through in his espresso.

On a side note, there is a branch of this cafe in Marseille if you’re looking for an option down there. 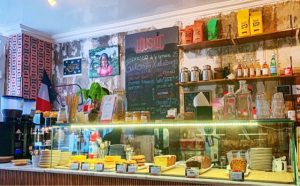 The main coffee outlet is at #5 on this street in the 10th arrondissement but there’s a second outlet in the same rue at #19. 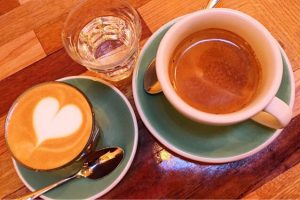 A rare sparkling water on the side

It’s a hugely busy, bustling brunch spot and the wait staff seemed a little annoyed that we were just there for the coffee.

Admittedly, the coffee looks the goods – great colour, nice bit of crema on the espresso and it’s fairly robust. If you can find a seat when it’s not wall-to-wall chaotic, you’re doing well.

If you’re heading towards Sacre Coeur but don’t want to make the full climbing commitment (steep streets, lots of stairs), then this is a good option. Nominally it’s in the South Pigalle area.

There are a few seats inside, with the stools along the window a good spot for people watching. You order at the bar, get a number and wait for the barista. They’re reasonably efficient – they have to be given there’s a very steady stream of locals.

The double espresso was very good with a slightly fruity aroma, and was slightly bitter. Here, Greedy Girl’s preferred coffee is called a piccolo. It was perfectly drinkable but still lacked the real oomph she likes. 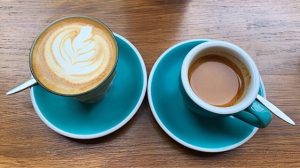 This is an option in the 9th arrondissement if you don’t want to hike much further afield.

It’s a cute little shopfront in the shadow of the church of Notre-Dame de Lorette. 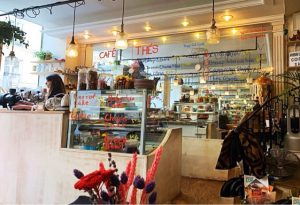 English signs – at least you can communicate

The coffee itself? A tad watery – which makes it rather hot so take plenty of time to allow it to cool down. 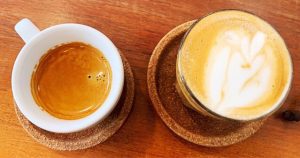 What gives it away that this is an Australian-style coffee shop? Maybe the surfboard hanging on the wall. Not much surfing goes on in the Melbourne suburb of Blackburn other than on the web …

But we rolled up here one grey morning, ordering a double espresso and a cortado. And waited, and waited …

Eventually we asked where the coffee was and, voila! Here we go …

Both of these were supposed to be doubles, but given the order had been forgotten (despite the cashier machine spitting out a docket for the barista) this is what we got – and if they were doubles we’d hate to see/taste singles.

The espresso had some flavour at least, if a bit bitter. The cortado was very weak. Okey dokey, onwards and upwards from here. 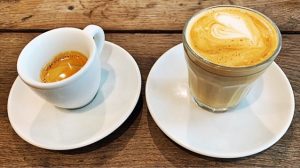 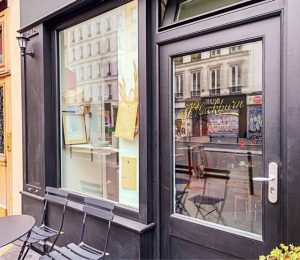 There’s a giant neon coffee cup on the wall inside this small shop front. With a few seats downstairs, we headed up to the mezzanine, thinking it would be an exceptional place to sit. Sadly though, there was a bit of a fly problem up there, so we immediately headed back down.

The coffee here is reasonably robust so a good option if you’re in the area. 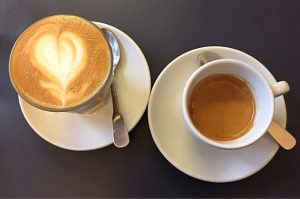